EXCELR8 with TradePriceCars.com signs off with Brands Hatch podium 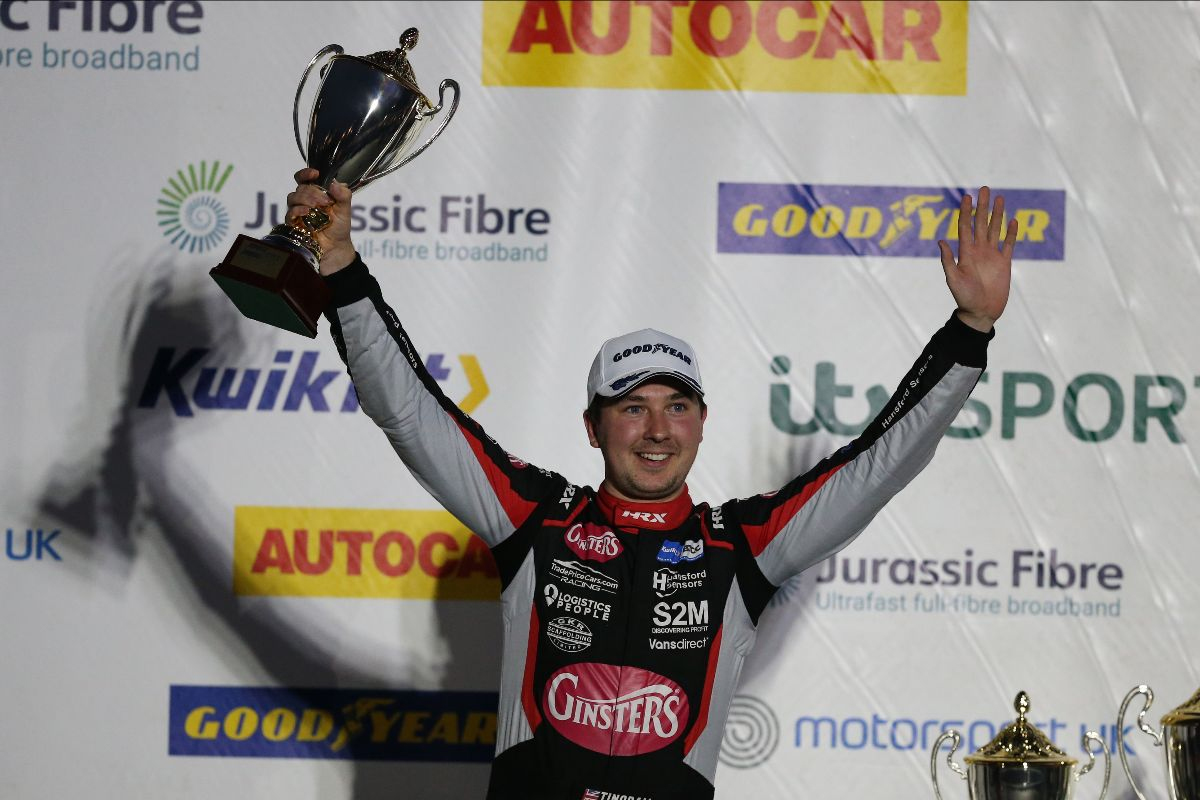 EXCELR8 with TradePriceCars.com signs off with Brands Hatch podium

The EXCELR8 with TradePriceCars.com team signed off with another podium finish as the 2021 Kwik Fit British Touring Car Championship season drew to a close at Brands Hatch.

The Suffolk-based team went into the season finale in contention for championship honours on the back of a strong campaign, with Tom Ingram one of five drivers still able to win the overall title.

With concussion ruling Jack Butel out of the season finale, TCR UK racer Andy Wilmot was drafted in for the weekend to line-up alongside Tom, Chris Smiley and Rick Parfitt in the four-strong Hyundai line-up, but he endured a tough start to the weekend as he was forced to sit out Saturday’s qualifying session having tweaked his back during free practice.

Tom would lead the team’s challenge in the session as he secured 13th place on the grid despite the additional success ballast he was forced to carry thanks to his championship placing, with Chris two places back in 15th – the pair having both lapped within half a second of pole.

Rick meanwhile took huge strides forwards across the three Saturday sessions and improved his lap time by nearly two seconds as he took 26th place on the grid.

Despite sustaining damage to his car thanks to contact from Jake Hill in race one, Tom was able to bring home a points finish in 13th place with Chris also finishing where he started having run in the points throughout.

Rick fought hard on track to end the race with 24th spot, with Andy returned to action with a new seat insert in place and raced from the back of the grid to 25th.

With the success ballast removed from his car for race two, Tom was confident of racing his way forwards up the order but instead found himself dropping to the back of the grid after being forced off track on lap one to avoid an incident ahead.

Despite that, he made the most of two safety car periods to work his way back up the order to recover to twelfth place at the finish.

A strong start – and avoiding the chaos ahead – saw Chris jump up into ninth on the opening lap and he was pushing hard to make up further ground when he was tagged by a spinning Aiden Moffat at Graham Hill Bend, resulting in being forced into the pits to retire.

Rick had also taken huge strides forwards at the start to rocket up into the top 20 before contact from the Cupra of Aron Taylor-Smith dropped him back down the order and forced him into an unscheduled stop that dropped him off the lead lap and left him 21st spot.

Avoiding the various dramas ahead, Andy kept his nose clean to bring his car to the finish in 19th.

With the championship titles decided, all gloves were off for the final race and Tom showed the pace of the Hyundai with a storming drive through to the pack to grab a ninth podium of the year with a fine third place. That also marked the 50th podium finish of his BTCC career.

Chris was also a man on the move from 24th on the grid as he showed his speed to work his way up to twelfth place at the finish, whilst Andy ended the weekend with 25th place having dropped off the lead lap following an unscheduled stop to check a vibration. Unfortunately for Rick however, driveshaft failure on the green flag lap would force him into the pits to retire.

The team ends the season having finished fourth in the overall championship and second in the Independents’ Trophy, as well as fourth in the Jack Sears Trophy.

Chris Smiley, #22 Ginsters EXCELR8 with TradePriceCars.com Hyundai i30 Fastback N, said:
“It’s been a pretty positive way to end the season in terms of our pace as the changes we made to the car have brought it forwards again. Had we not been taken out of race two in the incident with Moffat then we could have had a P6 there and been in the mix for the reverse grid – and then I think a podium finish would have been on.

“We made up twelve places in the final race which isn’t easy round here and it showed the pace that we’ve had all season. I think we’ve ended the year with a car that is quicker and quicker as we have been learning all the time, and it gives us something to build on for next season.”

Andy Wilmot, #55 EXCELR8 with TradePriceCars.com Hyundai i30 Fastback N, said:
“It was all doom and gloom for me after Saturday when I pulled my back in FP1 and I ended up sitting out qualifying. I wasn’t sure I’d be able to race on Sunday and it nearly didn’t happen, but I had so much support and didn’t want to let anyone down.

“Race one was good as I managed to overtake a few people and then in race two, I took advantage of issues for others to end up with P19. Starting there for race three I was well out of my comfort zone as these guys have been racing all season, and I just wanted to bring the car home in one piece, which we managed to do. Overall, as painful as it was at the start, I’ve really enjoyed the weekend.”

Rick Parfitt, #62 EXCELR8 with TradePriceCars.com Hyundai i30 Fastback N, said:
“It’s been a frustrating way to end the season and I feel a bit emotional because for me, this year has been the realisation of a dream. I made it to the BTCC and I didn’t embarrass myself on track, and I’m really glad that I had the opportunity to get out there on the grid. They say that you shouldn’t be sad that it’s over, but be happy that it’s happened – and that is the way I feel about the season.

“It’s been a huge learning curve for me this season but I feel I’ve become a better driver this year and am probably a better person as well for the experience and it’s been a honour to race alongside these guys this season. There are few things I know I’ll need to work on if I’m able to return again next season but I have a lot more experience and feel a lot calmer as I understand the racing and I feel I’ve made good ground across the year.”

Tom Ingram, #80 Ginsters EXCELR8 with TradePriceCars.com Hyundai i30 Fastback N, said:
“It’s been a bit of a testing weekend and one of those where we are left to wonder what might have been. It was great to end the year with some silverware and my 50th BTCC podium, but at the same time, you are stood there thinking ‘that’s what we could have won’.

“We started the year with a podium and we have ended it with a podium as well, and I think we’ve had a bloody good season. I’ve had a thoroughly enjoyable time getting to know all the boys and girls in the team and we’ve secured some really good results along the way.

“I wanted to try and get the Independents’ title this season and we fell just short but it’s been a brilliant season for us and we have done some great things. We can look back at 2021 with a lot of satisfaction and I think we’ve laid some good foundations looking ahead to the hybrid era.”

Justina Williams, team owner, said:
“The championship title was always going to be difficult this weekend, but I’m proud of the way we have performed this season and to have been in contention until the final meeting is a massive achievement.

“Considering this has only been our third season in the BTCC, we have been able to establish ourselves as a front-running outfit in the most competitive series in British motorsport, and the effort that has gone in this season will only benefit us going forwards.

“All of the drivers who have been involved this season have played their part, and I have to give huge credit to them and to everyone behind the scenes for the effort that has gone in across the year. With the new hybrid rules coming in, there will be very little time to relax over the winter and we’ll be working hard to ensure that we build on what we have achieved this season when 2022 comes around.”