EXCELR8 with TradePriceCars.com seeks to maintain title challenge at Croft 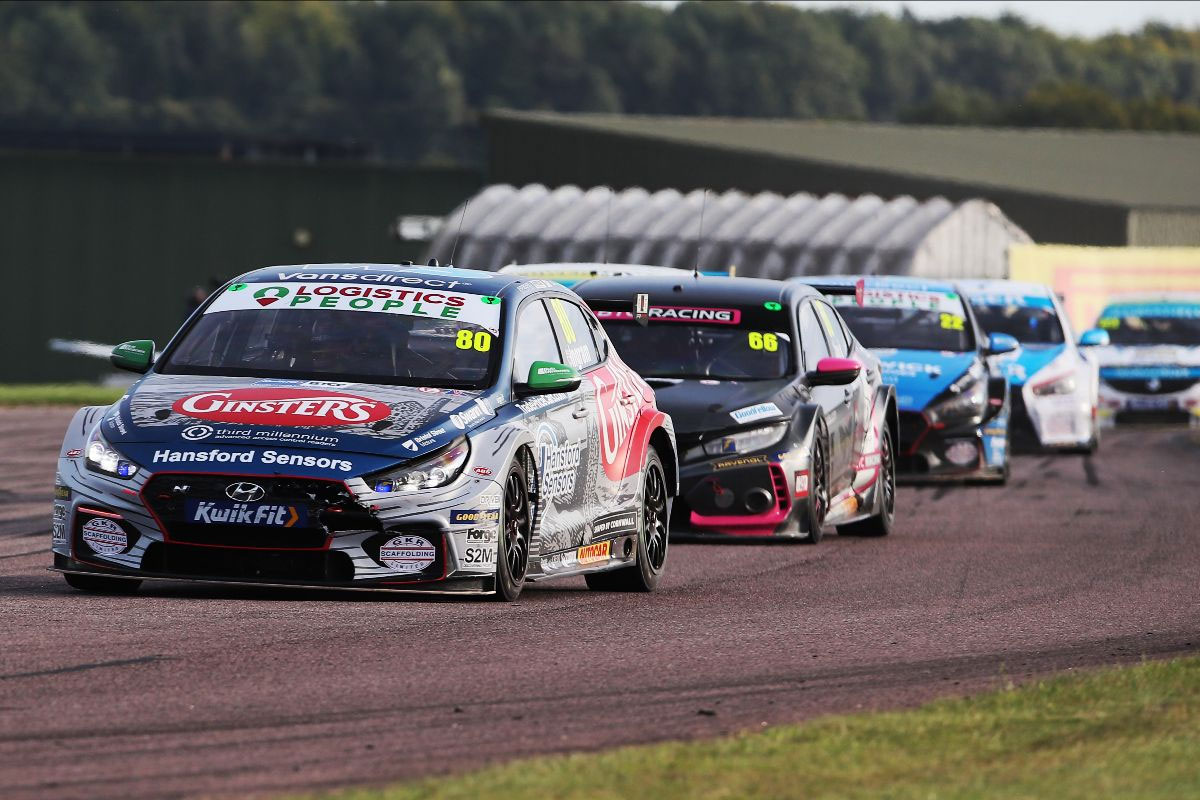 EXCELR8 with TradePriceCars.com seeks to maintain title challenge at Croft

The EXCELR8 with TradePriceCars.com team will hope to maintain its bid for championship silverware when the Kwik Fit British Touring Car Championship visits Croft this weekend for the seventh round of the year.

The Suffolk-based team heads for North Yorkshire well placed in the race for the title, with Tom Ingram holding second in both the overall championship and the Independents’ Trophy, and Jack Butel sitting third in the Jack Sears Trophy for drivers without an overall BTCC podium finish.

Tom has enjoyed success at Croft in the past, most notably last season where he recovered from a post-qualifying penalty that dropped him to the back of the grid to secure a win on race day.

He returns this year having enjoyed a stellar campaign to date in the ever-improving Hyundai i30 Fastback N, taking three wins and two further podiums to put himself firmly in contention for championship honours.

Although he will carry additional success ballast into the weekend, Tom remains confident of a strong showing on track as he seeks to keep pace with current points leader – and defending champion – Ash Sutton in the standings.

Team-mate Chris Smiley heads for Croft looking to join Tom in fighting for silverware on track after a consistent campaign to date that has seen him secure eighth top ten finishes – one more than in the whole of his debut season in the Hyundai last year.

The Northern Irish racer has shown front-running pace at a number of events this season but has yet to break onto the podium, which is the goal for the weekend ahead at a circuit where he has a best result of second.

Chris will also hope to make up ground in the championship standings from his current 15th place, as well as defending his top ten placing in the Independents’ Trophy.

Jersey-based Jack Butel makes the long trip to Yorkshire on the back of another successful weekend at Thruxton, where he secured a points finish for the second meeting in a row and also took top weekend honours amongst the Jack Sears Trophy entrants.

Jack has taken huge strides forwards across the season to date as he acclimatised to the Hyundai, and has shown himself to be more than capable of now regularly pushing for points finishes in the highly competitive field.

Another top 15 finish this weekend would only serve to enhance his growing reputation, whilst also helping him strengthen his bid for a top three finish in the end-of-season Jack Sears Trophy standings.

With team regular Rick Parfitt unfortunately sitting out the weekend on medical grounds to rest a back injury, GT racer Nick Halstead will come into the team for a one-off outing at Croft for what will be his BTCC debut.

Nick is no stranger to the paddock from his time competing in the GInetta GT4 Supercup and will look to stay out of trouble and make forward progress across the weekend before Rick returns to the wheel of the Hyundai for round eight of the year at Silverstone.

Chris Smiley, #22 Ginsters EXCELR8 with TradePriceCars.com Hyundai i30 Fastback N, said:
“We tested at Croft over the winter which means we have a good base set-up for the circuit going into the weekend, although we have made a lot of changes and improvements to the car since then.

“In recent rounds, we have shown strong consistent pace on race day and I’m confident that the same will be true this weekend. Because of how competitive the grid is this season, qualifying is more important than ever, so we need to make sure that we qualify well on Saturday to give us the best opportunity to score some big points.

“We’ve shown we have the pace to match the front-runners and having finished on the podium at Croft in the past, that has to be the goal again this weekend.”

Nick Halstead, #46 EXCELR8 with TradePriceCars.com Hyundai i30 Fastback N, said:
“This is a great opportunity for me to get onto the BTCC grid and I’m under no illusions about the challenge ahead. It’s been a while since my last races in a front-wheel drive car as my recent racing has been in GTs, but I’m really looking forward to Croft to see what I can do.

“I’m not going into the weekend with any big expectations and my goal is simply to do the best job possible on track. I’ll be working hard with the team in practice to get up to speed and then come race day, hopefully I’ll be able to get stuck in and have a battle in the pack.

“If I could get close to the top 20 then it would be fantastic, but the level of competition is high and we’ll have to see how it goes.”

Tom Ingram, #80 Ginsters EXCELR8 with TradePriceCars.com Hyundai i30 Fastback N, said:
“With the weight we are carrying on the car, this is another weekend where our best chance of success is probably going to come in races two and three, so that is what we have to work towards.

“I’d say that Croft is probably one of my favourite circuits on the calendar and it’s one where we tested with the car prior to the season starting, which is going to help us in terms of set-up. At the two other circuits where we ran during pre-season – Snetterton and Brands Hatch – we then went on to win, so it would be good if we could repeat that this weekend.

“The fact that the schedule on Sunday is so compact – and that we go straight from Croft to Silverstone – means that staying out of trouble is going to be more important than ever, and we need to get a good haul of points to keep the pressure on Ash in the standings.”

Jack Butel, #96 EXCELR8 with TradePriceCars.com Hyundai i30 Fastback N, said:
“I think I’m going into this weekend feeling more confident than at any other time since I moved into the BTCC after my results in the last two rounds, and I can’t wait to get back behind the wheel.

“I feel like I’m now starting to show what I can do in touring cars and that is all down to the fact that I feel more comfortable behind the wheel. All the work that I’ve put in with the team is starting to pay off, and the pace that I’m now showing is down to the effort that everyone is putting in.

“Going to Croft this weekend, I’m hopeful of being able to build on Knockhill and Thruxton to fight for more points from the start, and it would be fantastic if I was able to challenge for the Jack Sears Trophy again.”

Justina Williams, team owner, said:
“As has been the case at every round this season, we head for Croft in confident mood as we know we have a package that is capable of running at the sharp end of the field. With only four rounds left to run, we’re getting towards the business end of the season so a strong weekend this weekend is vital as we continue to fight for championship silverware.

“Both Tom and Chris have good records at Croft in the past and I fully expect them to be right in the mix for strong points across all three races. As for Jack, I see no reason why he won’t be able to build on the momentum he has from recent rounds and add more points to his tally as well.

“There is no pressure on Nick in terms of results, and hopefully he will enjoy his outing in the Hyundai before we welcome Rick back for Silverstone.”