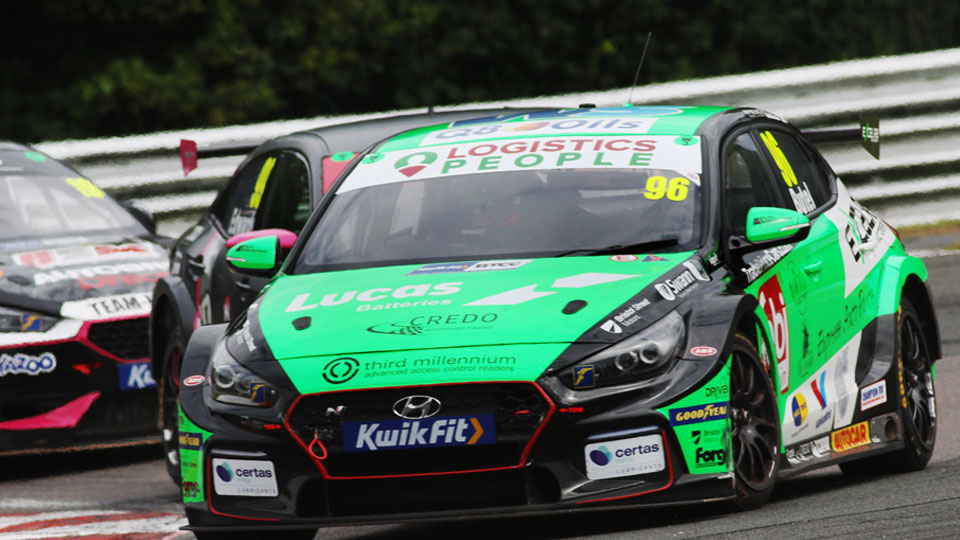 The EXCELR8 with TradePriceCars.com team battled hard on track to secure points from what proved to be a bruising weekend on track as the Kwik Fit British Touring Car Championship headed for Oulton Park for the fourth meeting of the campaign.

The Suffolk-based team headed into the weekend on the back of a strong weekend at Brands Hatch, with confidence high of being able to maintain the impressive form seen so far this year.

All four drivers showed solid pace through free practice in mixed weather conditions, but it proved to be a tough qualifying session for the quartet, with Chris Smiley best placed of the four in 20th spot having struggled with the front end of the #22 Hyundai.

Rick Parfitt and Jack Butel would line up 24th and 27th in what proved to be a hugely competitive session but there was disappointment for Tom Ingram as a wastegate issue left him unable to set a time and consigned him to the back of the grid for the opening race.

After the questionable conditions on Saturday, race day dawned with more favourable weather as the series welcomed back a full crowd for the first time since 2019, with all four drivers hoping to progress up the order.

Chris made a good start to jump up four places on the opening lap to sit on the fringes of the points, with Tom also making up spots in the early stages to quickly climb into the top 20, despite the additional ballast on his car.

Things went awry however on lap seven, when the BMW of Tom Oliphant was tipped into a spin at the final corner and rolled back across the circuit right in front of Chris, who was powerless to avoid heavy contact that left the front of his car extensively damaged.

Tom was able to sneak through as the drama unfolded ahead, but Rick was unable to avoid the BMW when he came around the blind corner running just outside the top 20 and also collided with Oliphant’s car. Taking to the grass, Jack made it safely through before the race was halted.

The race would resume as a six lap sprint, with Tom shuffled back to 19th spot at the finish by a number of lighter cars, and Jack working his way up into the top 20 as the pair crossed the line together.

With the Oulton Park meeting featuring a particularly tight racing schedule, the team worked wonders to ensure that all four cars were able to take the start of race two, headed by Tom and Jack on row ten.

Now free of the success ballast he had carried to that point, Tom was able to show the pace of the Hyundai with a battling drive up to tenth spot, setting the fastest lap as he fought his way through the field in impressive fashion.

An equally impressive run from Chris saw him come from 26th on the grid through to 14th to score well earned points and repay the team for its hard work, whilst Jack went close to making it three Hyundai’s in the top 15 as he crossed the line in 17th; having lapped noticeably quicker than he had in race one.

Rick meanwhile would take the flag in 23rd having stayed out of trouble to gain more valuable experience, having also lapped quicker than in race one.

Race three would prove once again to be a chaotic affair, with a multi-car accident on the opening lap causing officials to bring out the red flag, with Jack one of those forced into retirement when he was hit from behind and ploughed into a car that had spun in front. Rick was lucky to avoid being forced out by the same incident, having taken to the gravel to avoid contact himself.

On the restart, it was Tom’s turn to run into misfortune when he was forced to take to the grass at turn one to avoid Ash Sutton’s spinning Infiniti and that resulted in him picking up grass in the radiator, leading to a trip the pits at the end of the opening lap. That dropped him to the back of the field, although he would salvage a point for setting the fastest lap.

Having taken the restart in 14th, Chris would spend the race embroiled in a battle for the top ten places and was rewarded for a solid drive with tenth place when an incident in the pack around him at Druids led to the race being halted early.

That left Rick to finish in 19th spot having also avoided any dramas following the restart, with the former GT racer again improving on his pace as he picked up a second top 20 finish of the campaign.

The team now heads for Knockhill in two weeks time for round five of the season.

Chris Smiley, #22 Ginsters EXCELR8 with TradePriceCars.com Hyundai i30 Fastback N, said:
“The team did a great job to repair the car after the opening race and to come through and take 14th and tenth from there is a job well done. If you don’t finish race one, you know you are in for a struggle and it is difficult to pass around here, so I’m happy to salvage what we did from the weekend.

“I think in the final race, we just lacked that little bit extra that we needed to climb higher up the top ten but it’s good to score points on a weekend like this. When you look up and down the paddock, there have been people who have had worse luck than we have, so I’m happy to come away with something on the board.”

Rick Parfitt, #62 EXCELR8 with TradePriceCars.com Hyundai i30 Fastback N, said:
“It’s been an immensely tough race day after what I felt was a good qualifying result for me on Saturday. The only way to make up places around here is to be really aggressive as we have seen this weekend, and sadly in the first race, I was passenger when I turned into a blind corner and there was a car there – there was nothing I could do.

“It was good to get back out for race two, and P19 in race three was a good way to end things, although it has been a real shame to see so many crashes as that isn’t why we come racing.

“I have to give credit to the team this weekend as their efforts were heroic to get two very badly damaged cars repaired after race one. I owe them a lot as they are an amazing bunch and I’ll be buying them all a beer.”

Tom Ingram, #80 Ginsters EXCELR8 with TradePriceCars.com Hyundai i30 Fastback N, said:
“We got two fastest laps from three races which shows the speed was in the car. It’s not been an ideal weekend for us, but it goes to show how things have gone for other people as we have had two finishes outside the points and one relatively low score, but we have kept second in the standings.

“Obviously the others have closed in behind but we are still there and we live to fight another day. The car felt fantastic in the last race but we were out of position after having to pit, and I think that pace is the big positive to take away from Oulton Park.

“Beyond that, I think this is one for us to put behind us and move forwards.”

Jack Butel, #96 EXCELR8 with TradePriceCars.com Hyundai i30 Fastback N, said:
“It’s hard to find the words after the final race. We’d had a bit of a tough qualifying session but the team worked to make changes to the car for race day and it was a lot better.

“We had to deal with some understeer in race one, but then in race two we had the soft tyre on and the performance was really strong. To get close to the points meant we were in a good position for race three but unfortunately we then got caught up in someone elses incident and it has left the team with more repair work to carry out.

“It’s such a shame as the race pace was strong and there were points to be scored, but it’s one of those things we have to put behind us.”

Justina Williams, team owner, said:
“I’m hugely proud of the effort that the whole team has put in across race day given what happened on track. To repair two damaged cars after race one was a huge effort from everyone, and it showed how strong we are as a team that both Chris and Rick were able to get back out on track and complete all three races.

“All four drivers have endured their fair share of misfortune this weekend, but we know that motorsport has lows as much as it has the highs we have experienced recently. The important thing is that we are still right in the mix in the standings, and even after such a difficult weekend, Tom still sits second in the championship and is only five points away from the lead.

“There is still a long way to go this season, and we’ll come out fighting in the next round to maintain our title challenge.”