EXCELR8 with TradePriceCars.com ready for battle to resume at Oulton Park 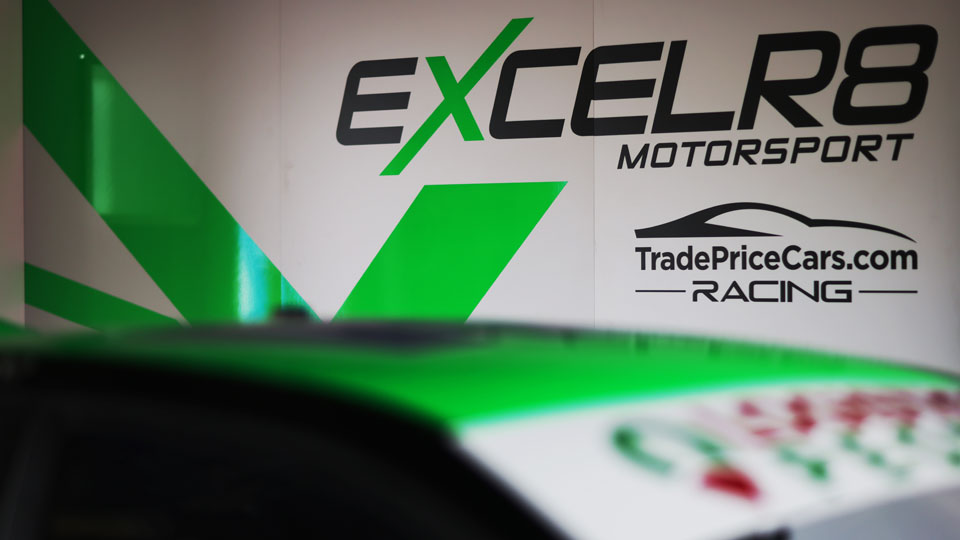 EXCELR8 with TradePriceCars.com ready for battle to resume at Oulton Park

After a brief early season break, the EXCELR8 with TradePriceCars.com team will return to action this weekend as the Kwik Fit British Touring Car Championship heads for Oulton Park for the fourth round of the campaign.

The Suffolk-based team has enjoyed a fine season to date in Britain’s premier racing series, and makes the long journey to Cheshire – where the team was able to test earlier this month – buoyed by victories in the two previous events at Snetterton and Brands Hatch.

Those wins, the first for both the team and for the Hyundai i30 Fastback N, have firmly cemented EXCELR8 with TradePriceCars.com’s position as a championship contender, with hopes high of another solid weekend to allow the team to maintain its early-season title challenge.

Heading for Oulton Park, Tom Ingram currently leads the team’s challenge in the points standings having taken the #80 Hyundai to an impressive total of four podium finishes in nine starts – including the two race wins.

Tom sits just three points behind defending champion Ash Sutton in both the overall and the Independent standings, which means he will be forced to carry an additional 66kgs of success ballast into the weekend.

Despite that, the two-time Independent champion remains confident of being able to score well across the three races as a whole, with his goal being to try and break onto the podium at Oulton Park for the first time in his touring car career.

Northern Irish racer Chris Smiley showed strong pace across the weekend at Brands Hatch where he took the #22 Hyundai to three solid top ten finishes, including a season-high of seventh in races one and two.

Although he only ran on the opening day of the Oulton Park test in mixed weather conditions, Chris set the quickest lap amongst the Hyundai drivers and he returns this weekend eager to build on that pace to challenge for his first podium finish of the campaign.

Jack Butel was the only one of the four drivers not to take part in the test, but the Jerseyman remains confident that will be able to fight for what would be a first points finish of the season during the weekend ahead.

Jack showed hugely encouraging pace last time out at Brands Hatch and will be returning to the scene of one of his strongest races last year, having raced from 24th on the grid to 16th in the final race of the weekend.

Keen to maintain the forward progress he has made thus far with the Hyundai, Jack will seek to try and secure a strong result in Saturday’s qualifying session to set up the best possible chance of scoring points on race day.

Rookie team-mate Rick Parfitt spent a single day on track during the test, although mixed weather conditions would have an impact on his running as he sampled the picturesque circuit in a front-wheel drive car for the first time.

Rick has enjoyed success at Oulton Park in the past having taken multiple race wins during his time in the British GT Championship, albeit on the longer International layout that is no longer used in the BTCC.

Whilst his expectations aren’t on fighting for victory this time around, Rick goes into the weekend looking to draw on the support of a packed crowd to make forward progress up the grid as he bids to challenge for a second top 20 finish of the season.

Chris Smiley, #22 Ginsters EXCELR8 with TradePriceCars.com Hyundai i30 Fastback N, said:
“I’m feeling really confident as we get ready to resume racing at Oulton Park this weekend. It’s a circuit that I enjoy and one where I have gone well in the past, even if that hasn’t always been reflected in the results.

“I feel we are in a position now where we have the car working well in all conditions, and I think we showed that in the test where we were right up there inside the top ten. We only have a little bit of time to find in order to be right at the front, and we will go into the weekend without any extra ballast at a circuit where weight can make a big difference.

“The key to the weekend is going to be qualifying because Oulton Park is such a tight circuit, and if you find yourself down the grid, it can be hard to make your way forwards. We have look to qualify well and then push hard in the races as it’s all to play for.”

Rick Parfitt, #62 EXCELR8 with TradePriceCars.com Hyundai i30 Fastback N, said:
“I scored the first British GT win for both the Gen 1 and Gen 2 Bentley Continental GT3 at Oulton Park so it’s a circuit where I have enjoyed success in the past, although I know that will count for little this weekend as the GT car and the BTCC car couldn’t be more different!

“I’ve not raced on this layout, and my track time was limited by the weather during the test, so I know this weekend will be a challenge – but I’m looking forward to getting back out there again.

“I need to try and build on the pace that I know is coming as I spend more time in the car, and my first goal is to try and get more from the car over a single lap in qualifying as I’ve certainly raced better than I’ve qualified so far. Whilst I might not have the experience that others have, I’ll be giving it my all again this weekend and I’m sure that having a big crowd watching on for the first time in my touring car career will also give me a big lift.”

Tom Ingram, #80 Ginsters EXCELR8 with TradePriceCars.com Hyundai i30 Fastback N, said:
“I’m feeling relaxed about the weekend – I’d almost forgotten we’re going racing again! I’m not feeling any pressure or nerves as we head to Oulton Park as we’ve been doing a good job so far, and we have to just keep our heads and aim to do the same again this weekend.

“Oulton Park is a circuit that I enjoy driving and one where I have had a lot of support in the past, and hopefully that will continue this weekend in front of a full crowd for the first time in a long while.

“We have to be realistic going as we know that the weight means we won’t be able to show our ultimate pace in qualifying and race one, but I just need to stay calm and look to score as many points as we can across the weekend as whole.

“Although we are likely to qualify out of position, I know the car will be strong and if there is a chance for us to get onto the podium this weekend then I’ll certainly be looking to take it. We just have to wait and see what opportunities come our way.”

Jack Butel, #96 EXCELR8 with TradePriceCars.com Hyundai i30 Fastback N, said:
“Although I wasn’t able to take part in the recent test at Oulton Park, I’m going there in a really positive frame of mind. Last season, I got to sample all different conditions on track so I know what to expect if it is wet or dry, and it is also where I had one of my best races last year.

“That all leaves me feeling confident that I can push to put some points on the board, as the work we have done in recent events has left me feeling much more comfortable in the car. At Brands Hatch in particular, we made some big changes that worked for me, and I think that was reflected in my improved pace across the three races.

“I know that qualifying is important at Oulton Park and that has been a bit of an achilles heel for me so far, but I don’t see any reason why we can’t get a good slot on the grid and then look to fight for a top 15 finish.”

Justina Williams, team owner, said:
“We’ve had a fantastic season so far and hopefully we can maintain our strong form when we get to Oulton Park this weekend. Although the same is true for our rivals, the fact that we tested at the circuit earlier in the month means we can look to hit the ground running when practice kicks off, and we are confident that all four drivers can challenge for some good results on track.

“Off track, it will be great to have a full crowd trackside for the first time since the start of the pandemic as there is no doubting the fact that the fans have been missed. They are such a big part of the BTCC and it’s hard to believe that this weekend will be the first time that we have raced the Hyundai in front of a full crowd. We’re expecting plenty of support, and will be pushing hard to give the fans reason to cheer.”