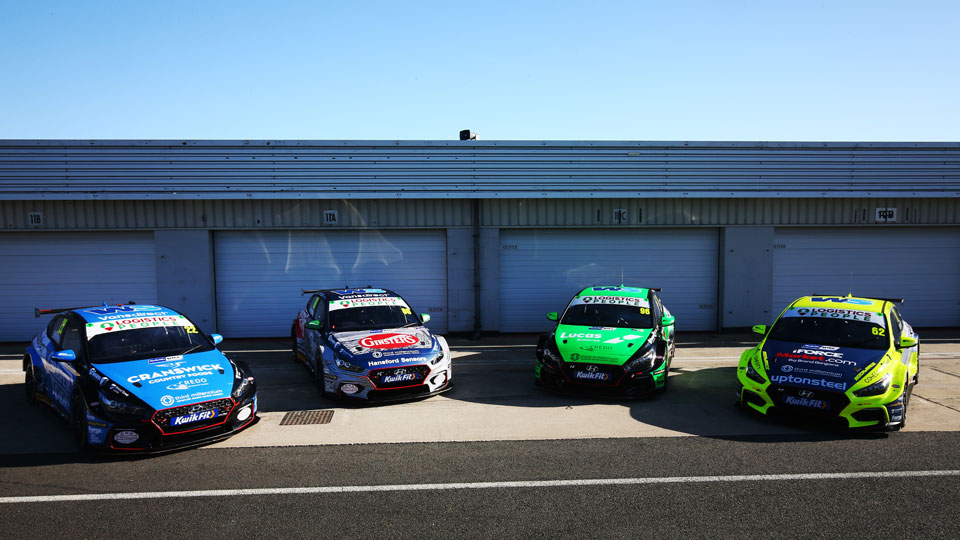 The EXCELR8 with TradePriceCars.com team will hope to impress this coming weekend when the new Kwik Fit British Touring Car Championship season bursts into life at Thruxton.

The Suffolk-based team will head for the fastest circuit on the calendar for what promises to be a big weekend in its short touring car history, with the season opener marking the first outing for the team since doubling in size to a four-car programme over the winter.

Confidence is particularly high on the Ginsters EXCELR8 with TradePriceCars.com side of the garage, with both Tom Ingram and Chris Smiley looking to put a big haul of points on the board to kick off their respective championship challenges.

Tom will be making his race debut at the wheel of the #80 Ginsters EXCELR8 with TradePriceCars.com Hyundai i30 N Fastback after signing up with the team for what will be his eight season in the series.

The two-time winner of the Independents’ championship has wasted little time in getting up to speed with his new car having shown impressive speed during pre-season testing, including the recent season launch at Silverstone where he posted the fourth fastest time.

A double winner at Thruxton last season, Tom will hope to challenge for silverware again this time around, with expectations high about a strong start to the year.

Northern Irish racer Chris heads into the opening weekend having also shown solid pace during the only official test of the off-season at Silverstone, where he posted the 13th best time despite not chasing an outright fast time as a number of his rivals did.

With a year of experience at the wheel of the Hyundai under his belt, Chris will be seeking to improve on his previous Thruxton best of ninth place, with his ultimate goal being to try and kick off his campaign with a trip to the podium finish.

The remaining two cars will be entered under the EXCELR8 with TradePriceCars.com name, with Jack Butel and Rick Parfitt both making their debuts with the team during this weekend’s three races.

Jack embarks on his second season in the series having made his touring car debut last year, with Thruxton proving to be one of his strongest weekends as he picked up three top 20 finishes.

The Jerseyman has enjoyed a productive pre-season programme as he gets used to the Hyundai and will hope to challenge for points from the outset as he chases a strong start to his challenge for the Jack Sears Trophy; the award only open to drivers who haven’t scored an overall podium in the series.

For Rick, Thruxton will provide an additional challenge as he makes the switch into touring cars for the first time, with his career to this stage having been focused on GT competition.

Not only will this weekend be the first time that Rick has raced a front-wheel car, it will also be the first time he has ever competed at Thruxton; meaning his main focus on the weekend is on staying out of trouble and gaining as much knowledge as possible given that the Hampshire circuit will play host to a second BTCC race meeting later in the year.

All three races this weekend will benefit from live coverage on ITV4, with Saturday’s qualifying session being streamed live on ITV.com

Chris Smiley, #22 Ginsters EXCELR8 with TradePriceCars.com Hyundai i30 N Fastback, said:
“I’m feel really good going into the opening weekend as we’ve been able to learn a lot during pre-season testing; particularly in the final three days of running. It’s been good working with Tom as we have similar driving styles, and we have been able to try out a lot of different things to improve the car from where it was last year.

“Thruxton will be an interesting place for us to start as no-one has been there testing, which means it will be a level playing field. There is no ballast to consider, so whoever is on top of their car will be towards the sharp end and I hope we can be amongst them with the work we’ve carried out over the winter.

“I think it’s wide open this season, and there are going to be a lot of people aiming for the top ten this weekend. A lot of it will come to down who can get a lap in in qualifying but we know we have a good car. The target is to maximise what we have, push to get into that top ten and see how far up we can get.”

Rick Parfitt, #62 EXCELR8 with TradePriceCars.com Hyundai i30 N Fastback, said:
“Having been able to spend a few days in the car in pre-season testing, I have a new found respect for BTCC drivers because there is a real knack to driving these cars; you can’t just jump in and be quick.

“I know that I’m still struggling a bit to get used to front-wheel drive, and I’m thinking about what the car is doing rather than feeling like I am part of it. However, a lot of that is down to seat time as you only gain the confidence you need from time behind the wheel.

“Thruxton is going to be a tough place for me to start because I’ve never driven there before, so I’m taking a massive step into the unknown and have no expectations in terms of results. I’m very much in the learning phase and whilst I’m not used to being at the back of the field, if that is where I am, then then only way for me to go is forwards.

Tom Ingram, #80 Ginsters EXCELR8 with TradePriceCars.com Hyundai i30 N Fastback, said:
“If you’d asked me before we went to Brands Hatch for our final test if I was looking forward to Thruxton then I would have said yes. However, we had a bit of eureka moment there where we tried a few things out that worked, and it leaves me even more pumped and excited going into round one.

“Throughout pre-season testing we have been able to make big steps forward with the car and the shape of the Hyundai is well suited to the high-speed nature of the Thruxton layout, which leaves me feeling quietly confident about what we can achieve. Of course there is an element of the unknown because we can’t test there before the weekend, but everyone else is in the same boat and I feel we are as prepared as we can be.

“I’m really excited about making my debut for the team and I want to be right up there fighting for pole and a win, as I have a good record around Thruxton in the past. However, it’s a long season and it’s important for the bigger picture to stay out of trouble and make sure we put as many points on the board as possible.”

Jack Butel, #96 EXCELR8 with TradePriceCars.com Hyundai i30 N Fastback, said:
“Thruxton is the closest thing to a home circuit for me, and I’m excited about going there to get the new season underway. Like everyone else, we haven’t been there to test the car so it will be interesting when we hit the track for the first practice session, but I’m going into it feeling confident.

“Over the course of pre-season, we’ve been able to get a decent amount of running under our belts and at Brands Hatch in particular last week, I felt I was able to take steps forward and gain a better understanding of the Hyundai.

“I’m looking forward to seeing where we stand in terms of pace when we get to round one and I’m hoping to work my way forwards across the weekend to try and get up towards the points, which is something I feel is certainly possible.”

Justina Williams, team owner, said:
“It’s been a particularly busy winter period thanks to the late finish to 2020 and all the work that was involved in the build of two new cars. The whole team has done a fantastic job to ensure that all four cars were ready for us to go out and test the upgrades we have made to the Hyundai, and we head into the opening round in confident mood.

“Tom, Chris, Jack and Rick are working together really well already, and like them, I’m hopeful of a strong start to the season. I can’t wait for the racing to get underway.”