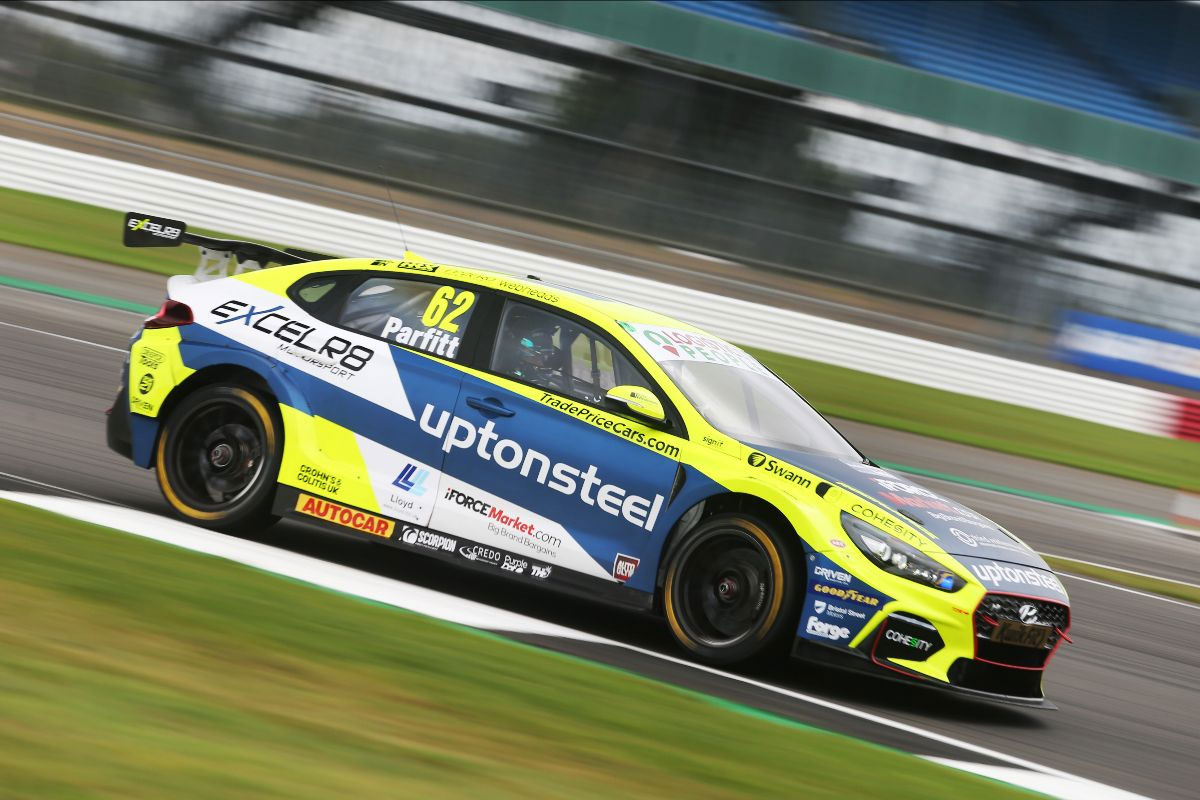 The EXCELR8 with TradePriceCars.com team will seek to keep the pressure on in the race to secure the 2021 Kwik Fit British Touring Car Championship title when the series heads for Donington Park this weekend for the penultimate meeting of the season.

The Suffolk-based team heads for the East Midlands circuit on the back of a strong outing at Silverstone, where drivers Tom Ingram, Chris Smiley, Jack Butel and Rick Parfitt showed impressive pace in the ever-improving Hyundai i30 Fastback N.

Tom scored his sixth and seventh podiums of the season last time out to move back up to second in the championship standings, and he goes into the ninth round of the year sitting 36 points behind defending champion Ash Sutton.

The two-time Independent champion has a strong track record at Donington having scored a race win in three of the last four seasons, and will be keen to try and challenge for more silverware this weekend despite the fact he will carry 66kg of success ballast into the weekend.

With just six races remaining, Tom has vowed to go on the attack as he bids to maintain his challenge for a first overall title, whilst he is also right in contention for the Independents’ Trophy.

Chris was one of the stars of the Donington Park meeting last season, which marked the first appearance in the series for the Hyundai.

Despite limited testing as a result of the first national lockdown, Chris raced to a podium finish on the i30’s BTCC debut and also picked up a further top ten finish to show the early potential of the package.

The Northern Irishman returns this weekend on the back of his best result of the year to date at Silverstone, with his focus firmly on trying to secure a podium finish for the second season in succession.

Jack made his BTCC debut at Donington Park last season after a late deal saw him join the grid just days before the opening round, and he returns this time around with confidence on a high after an impressive campaign to date.

Although unable to break into the points at Silverstone,  Jack enjoyed one of his strongest weekends of the year in terms of his pace, which included setting the fastest first sector of the entire field in race two.

With a top three finish in the Jack Sears Trophy – open to drivers who have yet to score an overall BTCC podium – very much up for grabs, Jack will hope to build on that Silverstone speed to challenge for his fourth points finish of the campaign, with a career-best result being a real possibility.

This weekend is set to be one of the biggest of the season for Rick, with Donington Park being his local circuit and also the home track for Upton Steel, one of the primary backers of the #62 Hyundai.

Rick has enjoyed plenty of success at Donington Park in the past, wrapping up the British GT4 title at the circuit in 2013 and then the overall GT3 crown four years later.

Like Jack, Rick heads into the weekend with confidence high on the back of an impressive weekend at Silverstone, where he displayed his strongest pace of the year by far – setting the fastest lap of the Hyundai drivers in race two.

Although yet to drive the Hyundai at the circuit, Rick remains optimistic about his chances on track, with his goal being to break into the points for the first time.

As at Silverstone, qualifying will be a two-part affair featuring a shootout for pole between the fastest ten drivers.

Chris Smiley, #22 Ginsters EXCELR8 with TradePriceCars.com Hyundai i30 Fastback N, said:
“Donington Park was a really memorable weekend for me last season, and to score a podium finish on our first weekend with the Hyundai was a fantastic achievement. Going back there this season, the car is massively different to what we had 18 months ago and I’m confident that we’ll be right on the pace from the start.

“In both practice and then particularly in race three, we showed our speed at Silverstone and I’m looking for similar this weekend at a circuit where I think we’ll be strong, especially when we’re not carrying any success ballast on the car.

“If we can break into the top ten in qualifying and get into the shootout then it will give us the best chance of fighting for three strong results, and my goal is to try and get that podium that I feel we deserve.”

Rick Parfitt, #62 EXCELR8 with TradePriceCars.com Hyundai i30 Fastback N, said:
“Donington Park is a circuit that holds many fond memories for me, although this is the first time I’ll have raced on the shorter layout. It’s going to be a steep learning curve as FP1 will also be the first time I turn a wheel there in the touring car, but I’m ready for the challenge and we’ll see what happens.

“There is no doubt that I’m going into the weekend on a high after the pace I showed at Silverstone, which was a real boost to the confidence. I’m now a lot more comfortable in the car compared to earlier in the year, I’m feeling racy, and I’m ready to put on a good show and fight for some strong results.

“I’m massively excited about my home meeting, and it would be great if this was the weekend where I could get some points on the board.”

Tom Ingram, #80 Ginsters EXCELR8 with TradePriceCars.com Hyundai i30 Fastback N, said:
“Having moved back up to second in the points at Silverstone, we’ve also picked up more success ballast again this weekend which we know will make it tough, but we have to just adopt the same approach we have taken for much of the year.

“We know that qualifying and race one are going to be tricky when we have the weight onboard, so we have to get the maximum we can from those, and then look towards races two and three to fight for the big points.

“There is no escaping the fact that Ash has a handy buffer in the points, and we have to go on the attack this weekend. There is a lot of hard work ahead, but my full focus in on doing the best job possible to stay in contention going into the final rounds.”

Jack Butel, #96 EXCELR8 with TradePriceCars.com Hyundai i30 Fastback N, said:
“When I raced at Donington Park last season, I only found out I’d be in the car a few days before the meeting so I really was thrown in at the deep end. I had no idea what to expect, and it was a case of trying to stay out of trouble and just learn as much as I could.

“Things couldn’t be more different this time around, as I’ve got a season of experience under my belt and I have a much better package underneath me with the Hyundai. We’re made huge progress over the course of the season, and I’m going into the weekend in a really positive frame of mind given the speed we showed at Silverstone.

“We were really unlucky not to be able to pick up some points last time out, but if we can replicate that pace, then I’m confident we can right in the mix for some strong results.”

Justina Williams, team owner, said:
“Donington Park was a huge weekend for us last season as it marked the first appearance for the Hyundai, and to celebrate with a podium finish was a fantastic achievement. Heading back this weekend, I’m hugely proud of the progress we have made as a team to be in the position where we are still in contention for multiple championship titles.

“With only two rounds of the season left to run, we have to keep pushing hard, but we go into the weekend in good shape after a strong performance for all four drivers at Silverstone. If we can replicate the speed we showed there, then I’m confident that Donington will once again be a memorable weekend.“