EXCELR8 with TradePriceCars.com picks up third victory of the year at Knockhill 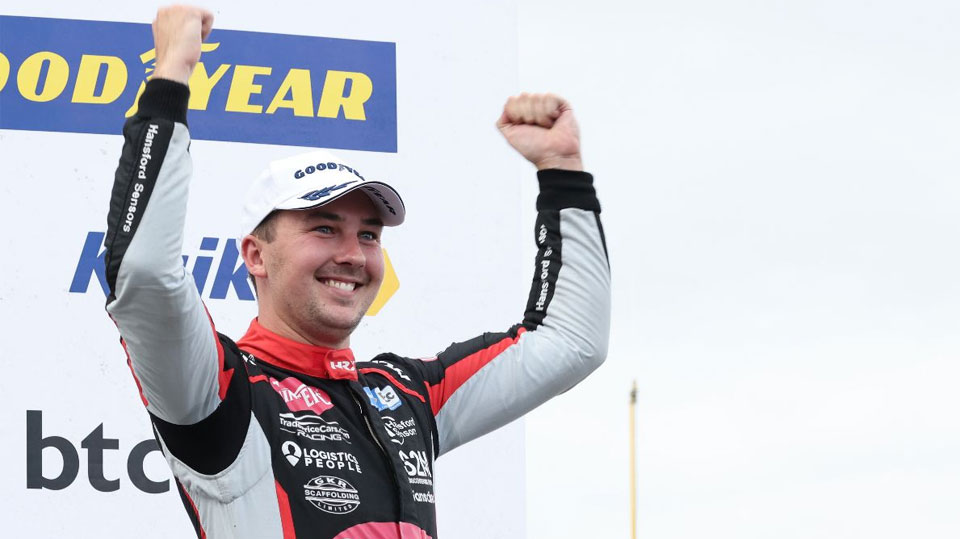 EXCELR8 with TradePriceCars.com picks up third victory of the year at Knockhill

The EXCELR8 with TradePriceCars.com team returned to the top step of the podium in fine style after securing a third victory of the Kwik Fit British Touring Car Championship season at Knockhill.

The Suffolk-based team made the long trip to Scotland looking to bounce back from a bruising Oulton Park weekend, where Tom Ingram, Chris Smiley, Rick Parfitt and Jack Butel had all found themselves in the wars.

All four drivers would show solid pace throughout free practice, with Chris in particular impressing as he posted the fastest time across the two sessions combined.

Come qualifying, he was able to maintain his front-running pace with a late lap that was good enough to secure third place on the grid, marking his best qualifying result to date at the wheel of the Hyundai.

Despite the extra weight on his car, Tom was only a tenth of a second behind although the close nature of the times meant he would be classified ninth, with Jack in 27th with a lap that was only a second away from pole.

There would be disappointment for Rick however, when he went off into the gravel at the Chicane without setting a lap time and was left to start at the back of the grid.

From his second row start, Chris held station in the early stages of race one before coming under pressure from the Honda of Josh Cook, who eventually managed to get ahead eight laps from the end. With Ash Sutton also sneaking through at the same time, Chris was left to cross the line in fifth spot.

With the extra weight in his car, Tom ran the slower medium compound tyre at the first opportunity and battled hard to take tenth spot, with both Jack and Rick making up places as they also ran the medium tyre, crossing the line in 20th and 21st places to leave the pair confident going into race two.

That race would start in dramatic fashion for Chris when he stalled on the line, with the pack behind all managing to avoid his car before it fired into life and he was able to get going – albeit having dropped down to 17th spot.

It meant Tom was left to lead the way and he would find himself in the heart of a huge battle for the top six places that eventually ended with him crossing the line in sixth spot.

Jack and Rick had both avoided the drama at the start and found themselves running either side of Chris on track through the early laps, with Chris managing to get ahead of Jack on lap seven. From there, he continued to recover well from the issue at the start as he rose up to 13th place at the finish.

Jack fought his way up into the points behind Chris and would end the race in 14th spot to open his account for the season after his strongest race of the year to date, although there would be huge disappointment for Rick, who also looked well set to fight for his maiden points finish.

Instead, multiple bouts of contact – including a hit at Clarks that saw him spun off into the tyres – left him a lap down in 27th place and with work to do in race three.

The reverse grid draw saw Tom lining up in fourth spot but with three cars ahead on the less favourable medium tyre. Clearing Senna Proctor on lap one, Tom then battled his way ahead of Jason Plato before setting about trying to make a move on the BMW of Stephen Jelley at the front.

Seeing a chance to get ahead at the hairpin when Jelley left the door slightly open, Tom dived down the inside to grab the lead of the race and would remain out front until the finish to grab his third victory of the campaign.

Chris continued his recovery from the issue at the start of race two with another impressive run that saw him charge through from 13th to sixth, setting some of the quickest laps in the race in the process.

Jack held his place in the points through the early stages of the race and went close to another top 15 finish, ending up just seven tenths of a second away from the points, whilst Rick ended the weekend in 25th place – the close nature of the field meaning he was unable to benefit from setting lap times comparable to the top ten runners as the race wore on.

Next stop for the team is a return to Thruxton in Hampshire for round six.

Chris Smiley, #22 Ginsters EXCELR8 with TradePriceCars.com Hyundai i30 Fastback N, said:
“I messed up the start in race two which was my fault and it’s a shame as a good result there would have put is right in the mix for race three. But overall, we came back from 13th to sixth which is no mean feat and I had to push hard to get my way through the field.

“It’s a weekend where I wonder ‘what if?’ but we we showed we have genuine pace in qualifying and that our race pace was strong. It’s taken me a bit of time to get dialled into the car with the changes we have made but I’m feeling much more comfortable now and I know we can be strong through the rest of the season.”

Rick Parfitt, #62 EXCELR8 with TradePriceCars.com Hyundai i30 Fastback N, said:
“Having never been here before, there was a lot to learn this weekend but I was happy with my pace in practice and felt confident going into qualifying. Unfortunately, a small mistake there meant I ended up out of position on the grid but to then get up to the fringes of the top 20 in race one was a good start to race day, especially on the slower tyre.

“With the soft tyre on the car, I really felt I could push for the points in race two, particularly when I avoided some of the chaos at the start, but then my car seemed to become a magnet for others and it undid all of good work that I’d done to get myself up into a really strong position.

“It’s hard to put into words how frustrated I feel because I know there was the potential for a really good result here and that has been taken away through some overly robust moves. Knockhill is a fantastic circuit and I’ve really enjoyed the support of all the fans, but sadly this weekend has been more ‘Wreck and Roll’ than Rock and Roll.”

Tom Ingram, #80 Ginsters EXCELR8 with TradePriceCars.com Hyundai i30 Fastback N, said:
“From fourth on the grid in race three it was always going to be tricky but that was such an ace race, and it’s nice to come away with the win. It was hard work but when there was a chance to get the lead going into the hairpin, I took it as it was my only opportunity.

“If I’d shown my hand and not got through, Stephen would have then covered it in the following laps, so I had to get ahead and I’m delighted to have a third win of the year on the board.

“With the weight we carried into the weekend, it was all about working towards race three so it’s nice for the plan to have worked and to have made up ground across the three races to get to the front.

“We’ve lost a few points in the standings across the weekend as a whole, but the win at the end has clawed a few back and that was important as it’s still so close at the front.”

Jack Butel, #96 EXCELR8 with TradePriceCars.com Hyundai i30 Fastback N, said:
“I didn’t think we’d be able to fight for points after qualifying so I’m delighted to come away from the weekend with a 14th place finish. The car has been really strong across race day and I think we could have scored more points in the final race but a small mistake cost me places.

“This weekend has been a massive boost for me and it shows we have the pace to be right there in the points, so the goal now has to be to add to this in the rounds that are still to come.”

Justina Williams, team owner, said:
“We wanted to bounce back from Oulton Park and that is what we have done on track this weekend. To now have three wins this season is fantastic, and it keeps us right in the mix in the championship at the half-way stage.

“Tom pulled a great move to get the win, which was richly deserved, but I think all four drivers can be pleased with how they have driven this weekend. Chris showed fantastic pace in qualifying and also in the races to take two strong top tens, and Jack also had his strongest showing by far to get points on the board.

“It’s a massive shame for Rick to not be able to get the results his pace deserved through no fault of his own, but for someone who hasn’t visited Knockhill before, he acquitted himself well and his time will come.”