EXCELR8 with TradePriceCars.com out to build on positive start at Snetterton 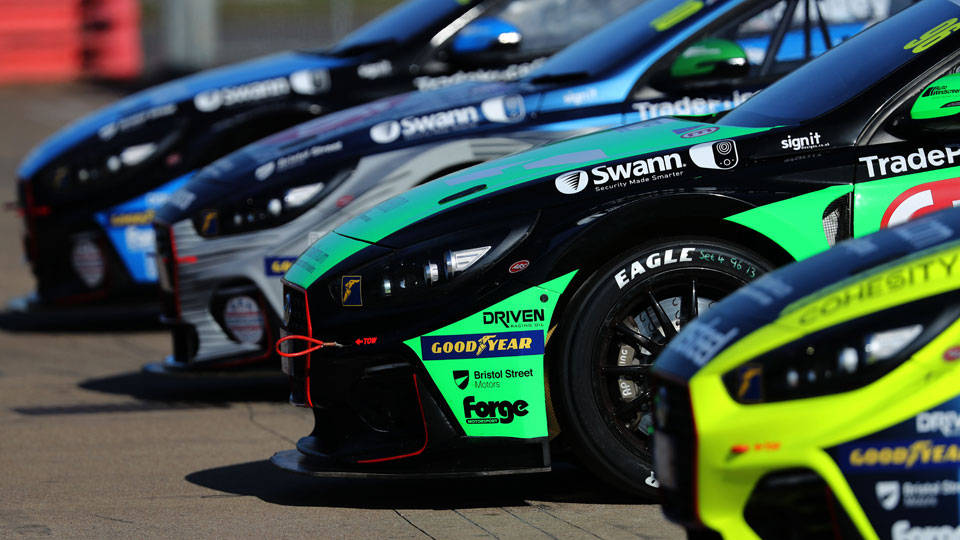 EXCELR8 with TradePriceCars.com out to build on positive start at Snetterton

The EXCELR8 with TradePriceCars.com team will hope to build on a positive start to the Kwik Fit British Touring Car Championship season when the 2021 campaign resumes this weekend at Snetterton.

The Suffolk-based team makes the short trip across the border to Norfolk on the back of front-running performance at Thruxton last month, where the team secured a new personal best in qualifying before equalling the best race result it has secured so far in touring car competition.

Tom Ingram currently leads the team’s challenge at the wheel of the #80 Ginsters-backed Hyundai after a strong debut in EXCELR8 colours saw him follow up a second place finish in the first race of the year at Thruxton with sixth spot in race two – leaving him inside the top six in the early season standings.

The two-time Independent champion has a strong record at Snetterton in the past having scored five podium finishes in the last nine races, including a fine victory from pole position back in 2019.

With a weekend of experience at the wheel of the Hyundai under his belt, Tom will now seek to maintain that strong run of form to close the gap on his rivals ahead in the title race.

Northern Irish-racer Chris Smiley will be seeking to get his championship campaign back on track, after a challenging start to his season in the #22 Draper Tools-supported car.

Chris showed strong pace across the weekend at Thruxton but his hopes of joining Tom in fighting towards the front of the grid were ended in race one when he was collected by an out-of-control rival on the opening lap.

A solitary 15th place from the three races was little reward for his efforts, with Chris hoping to fight back at a venue where he too has gone well in the past, having scored a top three finish at the circuit back in 2019.

Chris – who secured EXCELR8’s first ever podium at Donington Park last season – came close to another top three finish at Snetterton before he was tipped into a spin whilst running near the front of the field, and he will hope to be firmly in the mix for silverware during the weekend ahead.

Thruxton marked the series debut for Rick Parfitt at the wheel of the #62 Upton Steel-backed car, with the former British GT title winner being the only rookie on the grid this season.

On his first weekend racing a front-wheel drive car, Rick was able to make solid progress across the three races despite challenging weather conditions, and came close to breaking into the points for the first time.

A podium finisher at Snetterton during his GT days, Rick will hope to learn as much as possible across the weekend as he works towards his goal of challenging for the top 15 places.

It’s a similar story for Jack Butel in the #96 Febi Bilstein- supported entry, with the Jersey racer also looking to try and score his first points of the season.

Jack’s first outing in the Hyundai saw him score a pair of top 20 finishes and like Rick, he was able to learn a huge amount about the car in what amounted to his home round of the season.

With a better understanding of how to extract the maximum from the i30 Fastback N, Jack makes the long trip to Snetterton with his focus firmly on pushing towards the points scoring positions, with the potential to try and secure his best BTCC result to date this weekend.

The Snetterton meeting will feature a revised format for the second successive season, with Saturday featuring a return of the two-part qualifying system seen for the first time in 2020.

Rather than drivers having a single 30 minute session in which to secure their starting position for race one, the field will instead contest a slightly shorter 25 minute which will decide positions 11-29 on the grid. The ten quickest drivers will then go through to a second session running over just ten minutes, where times will be reset before they will do battle for pole position.

This weekend’s race meeting will be the first since the 2019 season finale at Brands Hatch to feature fans trackside, with a limited number of spectators permitted to attend on both Saturday and Sunday.

For those unable to attend in person, all three races will air live on ITV4, with qualifying being streamed on the ITV website on Saturday afternoon.

Chris Smiley, #22 Ginsters EXCELR8 with TradePriceCars.com Hyundai i30 Fastback N, said:
“I’m feeling in a good place going into the weekend. It seems like we’ve had quite a long break since round one, so I’m keen to get back in the car and get my championship campaign underway after a difficult start.

“Although the results at Thruxton weren’t what I was looking for, the pace in the car was good and I’m eager to try and make the most of our potential this weekend. Snetterton is a circuit that I enjoy and one where I have had some strong performances in the past, including last year with the Hyundai.

“The first goal this weekend is to try and make it into the top ten shootout in qualifying, because if we can do that, then we’ll be right in the mix for some strong results on race day. It’ll be great to have some fans back trackside cheering us on as they have been missed, so I can’t wait to hit the track and get started.”

Rick Parfitt, #62 EXCELR8 with TradePriceCars.com Hyundai i30 Fastback N, said:
“It will be nice to go to a circuit that I know this weekend, and I’m keen to build on what I feel was a strong debut weekend in the BTCC. I have to now take everything that I was able to learn from round one – which was a lot – and use it to continue making progress forwards.

“The biggest thing from my debut after so long racing a GT car was learning how to really lean on a touring car through the quicker corners. I know that I still have a long way to go, but the aim from day one was always on progression. I went quicker each time out at Thruxton, and I know that the speed, the positions and the points will come in time if I keep focused on the job at hand.

“Because I have already tested the car at Snetterton, I have some form of reference when we hit the track for first practice which I think will help. Hopefully I can qualify towards the top 20 and then race there on Sunday. It’s a big ask at this stage but we’re not far away, and I feel it is achievable.”

Tom Ingram, #80 Ginsters EXCELR8 with TradePriceCars.com Hyundai i30 Fastback N, said:
“I’m feeling really confident going into the weekend. We had two good results first time out in the car, and although race three was a bit disappointing, it may actually be a blessing in disguise as it means we are going to Snetterton with less ballast in the car. We know that Snetterton is a circuit where the weight can have an impact, so that could be important when it comes to qualifying.

“I’ve got a good record at Snetterton with a pole position, a win and a number of podiums, and it’s now something of a second home event for me given it is the home circuit for the team. When we tested there over the off-season, the times stacked up well compared to the cold weather that we faced at Snetterton last year, so it will be nice to return in the sun this weekend, and more consistent conditions than we saw at Thruxton will allow us to try out a few things that we have planned on the car.

“I do need to try and recover some points after round one but I’m not feeling stressed as I know the car will be strong; I’m super chilled and my head is in a good place. I’m also looking forward to having some fans watching trackside for the first time in a while, as they’ve certainly been missed.”

Jack Butel, #96 EXCELR8 with TradePriceCars.com Hyundai i30 Fastback N, said:
“Thruxton was a solid start to the season for me, and I feel confident of building on the results we scored there when we get to Snetterton. It’s the circuit where I drove the Hyundai for the first time so I have some data to work with already, and I now understand the car a lot more from the opening rounds so I hope we can head into practice on the front foot a bit more.

“The opening round for me was important in terms of working with the team under the extra pressure of a race weekend, and also learning all about how the car performs in the races as it is quite different to the Mercedes I raced last year. During the weekend we made good progress and improved our pace, and that is something that was really pleasing.

“I showed that I have the speed to fight inside the points at Thruxton and that has to be the goal this weekend. If we can get qualifying right on Saturday so that we start where we should be on the grid, it’s certainly achievable.”

Justina Williams, team owner, said:
“As our home event, this is a big weekend for us and we can make the short trip to Snetterton in confident mood after the performance we showed in the opening round at Thruxton. All four drivers showed encouraging pace in very tricky conditions, and I fully expect all four to be strong again during the weekend ahead.

“Tom and Chris have experience of what it takes to stand on the podium at Snetterton, and I think both Rick and Jack have the potential to push towards the top 15 and score their first points of the season given the speed they have displayed so far.

“It will also be great to have fans back watching this weekend as we know that spectators are such a crucial part of the BTCC. Hopefully we can put on a good show for those who are lucky enough to have secured a place trackside.”