EXCELR8 with TradePriceCars.com kicks off with a podium at Thruxton 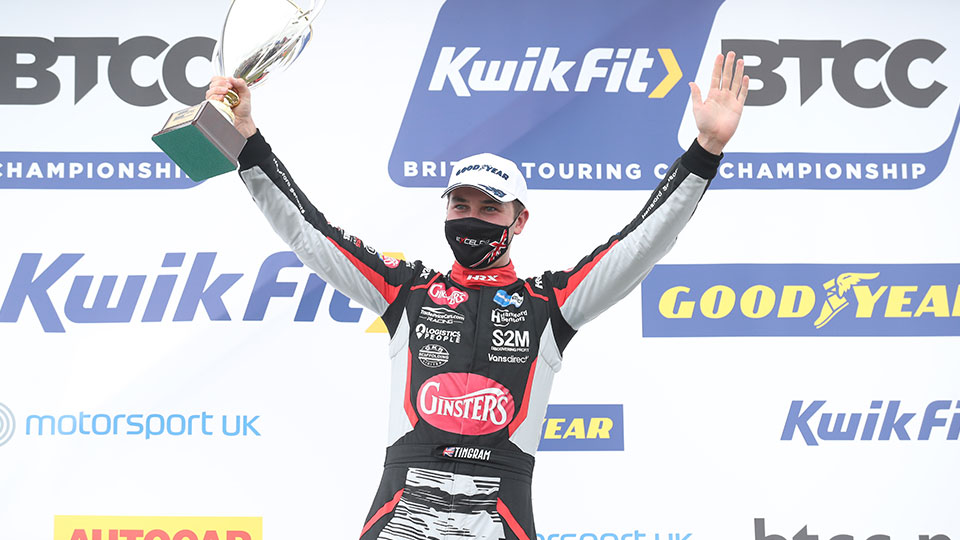 EXCELR8 with TradePriceCars.com kicks off with a podium at Thruxton

The EXCELR8 with TradePriceCars.com team enjoyed a strong start to the new Kwik Fit British Touring Car Championship season, with a podium finish from the opening round of the campaign at Thruxton.

The weekend marked the first outing for the Suffolk-based outfit as a four-car programme after doubling in size over the winter, with the returning Chris Smiley joined by team newcomers Tom Ingram, Jack Butel and Rick Parfitt.

The weather would have a major impact on Saturday running, with both free practice sessions being run in wet conditions, providing an added challenge for the quartet at the wheel of the Hyundai i30 Fastback N.

Although qualifying would also start in wet conditions, the fact that rain had stopped falling meant the circuit started to dry, with drivers diving in to bolt on slick tyres for what would be a mad charge to improve in the closing moments.

Tom would be fight for pole position in the #80 Hyundai as he secured fourth on the grid for his first race with the team, with Chris also putting himself firmly in the mix with tenth spot in the #22 entry. Although an oil leak ended his session early, Rick was an encouraging 25th for his first race in the series, with Jack lining up in 28th having been unable to get the most out of his slick tyre run.

The opening race would provide the first chance for the four drivers to run in fully dry conditions, although it would prove to be a race of mixed emotions.

Holding position at the start, Tom moved up into third when Ash Sutton suffered a spin at the Complex, and then launched his Hyundai up the inside of Colin Turkington at Church to move into second spot.  Although he would then push leader Josh Cook hard after an early safety car period, Tom would ultimately settle for second spot to kick off his title challenge with a podium. The result matched the team’s best result in the BTCC to date.

Unfortunately, the early safety car came as a result of Chris being forced into retirement when he was collected by the out-of-control Honda of Gordon Shedden and went off heavily into the tyres at Goodwood.

Both Jack and Rick would lose places on the restart as quicker cars that had been caught up in dramas on lap one made their way back through the field, with the pair running together through the early stages of the race.

Through the closing laps, Jack saw his chance to make up places and a number of impressive overtakes saw him climb his way up to 21st, with Rick crossing the line in 25th in the gaggle of cars behind as he successfully made it to the finish in his first touring car race.

Race two would prove to be a dramatic affair after a multi-car incident saw the action halted just seconds after the start, although all four Hyundais were able to avoid the drama.

On the restart, Tom made his bid for the lead when the lights went out but would be shuffled down to fifth on the opening lap having lost momentum on the exit of the complex. With his i30 Fastback N now carrying additional weight, Tom would slip behind the lighter Honda of Dan Rowbottom, but he kept Colin Turkington’s BMW at bay to secure a second top six finish of the weekend.

Despite starting at the back and running in traffic throughout, Chris was showing strong pace in his repaired car after hard work from the team saw him take his place on the grid, but his hopes of a points score were ended late on when he was forced into the pits when the water temperature rocketed on the car – the issue later being traced to a faulty sensor.

Jack would spend most of the race running inside the top 20 before eventually crossing the line in 19th, but unfortunately for Rick, he would fail to make the finish when a throttle problem saw his car go into limp mode.

The arrival of rain before the start of race three left teams scrabbling to change tyres on the grid, with Tom, Jack and Rick all on wet rubber but Chris gambling on slicks from 23rd.

Unfortunately for Tom, a penalty for an issue on the grid dropped him out of contention for points and he gambled on pitting for dry tyres in the hope of moving up the order as conditions improved. However, when the rain returned, the gamble didn’t pay off as his weekend ended with 22nd place.

Having kept his car on track in the wet conditions early on, Chris was able to make progress through the pack as the track started to dry out, and had broken into the top ten when the rain started to fall. Fighting hard to keep his car on track, Chris survived a wild slide at Church to bring the car to the finish in 15th spot and the final championship point.

Rick would finish little more than a second behind after his most competitive showing of the weekend, with the former British GT champion reveling in the conditions and only missing out on a potential points finish after a clash on track delayed his push forwards on the penultimate lap.

Jack would also fight forwards on his wet tyres and picked up his second top 20 finish of the weekend to complete a solid first outing with the team.

The next round of the BTCC season will take place at Snetterton on the weekend of 12-13 June.

Chris Smiley, #22 Ginsters EXCELR8 with TradePriceCars.com Hyundai i30 Fastback N, said:
“The results don’t tell the full story this weekend. In race one I was wiped out through no fault of my own and then in race two, I’d got up from 28th toward the points but we had a small fault with an engine temperature sensor which showed the engine was overheating when it wasn’t.

“In race three, I think we made a good call with the tyre and we were up into the top ten from the back but then the rain returned at the end. We managed to grab a point and whilst it is frustrating not to get more, there are a lot of positives to take away as we aren’t a million miles away pace wise.

“The team did a great job to repair the damage to the car for race three and they didn’t really get rewarded for their effort. Everyone has a bad weekend during the season; hopefully I’ve just got rid of mine early!”

Rick Parfitt, #62 EXCELR8 with TradePriceCars.com Hyundai i30 Fastback N, said:
“It’s been a real baptism of fire for me this weekend and I now know I need to work on my starts a bit, but that final race was fantastic for me. I looked after the wet tyres early on and passed a lot of people, and it was like the old days in karting when I used to love the wet. We were in 16th and with one more lap I would have got a point which is mad, and a great way to finish.

“I think I was far too polite in the first two races and it was a shame that a minor issue put me out of race two, but I had a good car under me in race three and was determined to fight for my position.

“This weekend had been invaluable and I’m getting a better understanding of the car. The fundamentals are there and I have to build on this weekend when we go to Snetterton.”

Tom Ingram, #80 Ginsters EXCELR8 with TradePriceCars.com Hyundai i30 Fastback N, said:
“I’m really pleased with this weekend and I think we’ve done a fantastic job. We have turned up at a circuit where we haven’t been with the car before and qualified fourth, stuck it on the podium and then added another top six finish so we can pleased, even with what happened in race three.

“It’s nice to have been able to get the podium finish early on and we know from race two where we now need to make improvements when we are carrying weight, and we have to make the most of what we have learned here as the season goes on and the ballast comes into play more.

“Personally I’m not sure the punishment fit the crime in race three but the rules are the rules and we’re still sixth in the championship which is some decent early points on the board, and it also means we don’t carry too much weight into the next round.”

Jack Butel, #96 EXCELR8 with TradePriceCars.com Hyundai i30 Fastback N, said:
“I think it’s been a good weekend after a tough qualifying session, where we just made the call to switch to slick tyres a bit too late as I couldn’t get the heat in them that I needed.

“From there, I think I’ve raced well and to get two top 20 finishes is very encouraging and we’ve shown some solid race pace, particularly in the opening race. Race three was a huge challenge with the conditions but I’ve gained a lot of experience this weekend and there is plenty that we have learned that will help as the season goes on.

“The team is pleased with how the weekend has gone, and that is the key thing.”

Justina Williams, team owner, said:
“It’s been a very challenging weekend to start the season with the conditions as they have been, and overall we’re pleased with the performance of all four drivers. For Tom to go out and get a podium finish on his first start in the Hyundai was fantastic, and I’m sure that Chris could also have been right at the front had it not been for an incident that he could do nothing about in race one.

“Both Jack and Rick have made good progress across the weekend and we know that they are only going to get quicker, so there are plenty of positives for us to take away from Thruxton as a team.

“We can look ahead to going to our home circuit next with all four drivers looking to build on their results here.“