EXCELR8 with TradePriceCars.com fights to triple top ten at Thruxton 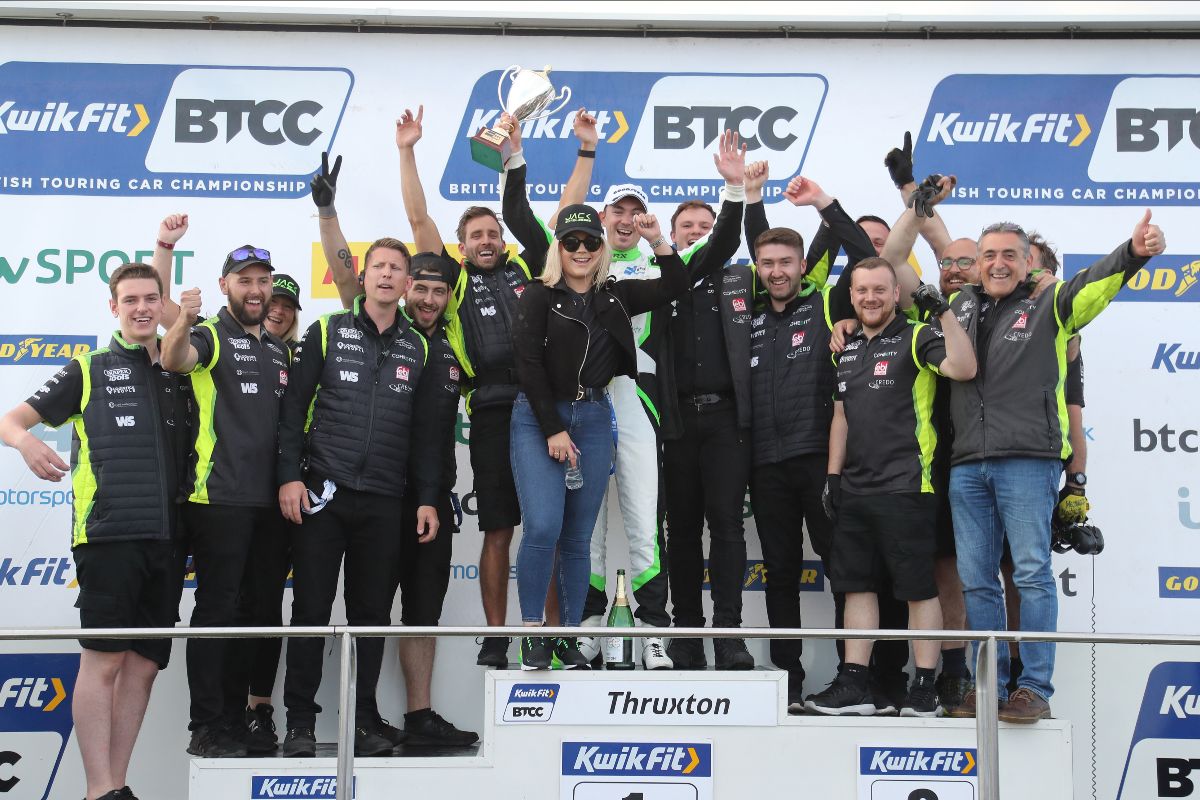 EXCELR8 with TradePriceCars.com fights to triple top ten at Thruxton

The EXCELR8 with TradePriceCars.com team fought hard on track to secure three top finishes as the Kwik Fit British Touring Car Championship returned to Thruxton for the sixth meeting of the season, and also wrapped up a first Jack Sears Trophy win of 2021.

The Suffolk-based team headed for the Hampshire circuit buoyed by a strong weekend at Knockhill two weeks earlier, where the Hyundai outfit had secured a third win of the 2021 campaign.

All four drivers showed solid pace across the two free practice sessions but Saturday’s qualifying session would yield mixed results in the highly-competitive field, with Tom
Ingram taking his ballast-heavy i30 Fastback N to twelfth place and Chris Smiley lining up in 16th.

Jack Butel enjoyed his strongest qualifying result to date to secure 22nd place on the grid with a lap less than tenth of a second away from the top 18, whilst Rick Parfitt lapped more than a second quicker than he had earlier in the season to line up 28th for the opening race.

The close nature of the field would restrict the amount of overtaking on race day, but all four drivers were able to make up ground in race one, with Tom working his way up into the top ten to finish in tenth spot, and Chris finishing just outside the points in 16th.

A strong start saw Jack quickly into the top twenty and he would remain there throughout to cross the line in 19th, with Rick’s pace improving as the race wore on as he took the chequered flag in 25th.

With the success ballast removed from his car for race two, Tom was quickly making up places at the start and soon found himself running in sixth behind the Toyota of Rory Butcher.

Tom finally made pressure on his rival pay as he got ahead into fifth but his good work was undone when an unfortunate puncture on the final lap exiting Church and heading up to the Chicane dropped him to twelfth place.

One of those drivers to benefit was Chris, who found himself as part of the train of cars chasing Butcher’s Toyota and crossed the line in eleventh spot, whilst there was a second points finish of the campaign for Jack thanks to a mature drive that saw him fight ahead of multiple race winner Tom Chilton.

Rick’s ever improving pace was shown by the fact that he lapped half a second quicker than in race one, with a strong start moving him up four spots on the opening lap alone. Into the top 20 before the half way stage, Rick lost two places after a small error but recovered well to bring his car home in 20th spot.

The final race of the weekend would be affected by three separate safety car periods that made it hard for drivers to get into a rhythm but Tom was one of those drivers able to make up places in the limited racing available, picking off cars ahead with a number of impressive overtakes to secure fifth place – crucially taking points out of championship leader Ash Sutton.

Just as important for the team’s title challenge, Chris was able to fight his way forwards to finish inside the top ten and produced a strong drive to keep Sutton at bay throughout having fought ahead of the points leader just before the half-way stage.

Jack would run in the points for a large part of the race before crossing the line in 16th place, but his results from the weekend would secure him the Jack Sears Trophy win –  the award open only to drivers without a podium finish.

Rick meanwhile would pick up a flat-spotted tyre early in the race but still produced his quickest race laps of the weekend with another encouraging top 20 finish, showing pace comparable with the top ten for a large part of the race.

Chris Smiley, #22 Ginsters EXCELR8 with TradePriceCars.com Hyundai i30 Fastback N, said:
“It’s been close all weekend and to come from where we qualified to get a top ten in race three is good, as I don’t think there are many people who made up places like we did.

“The last time we were here, we didn’t get chance to change the set-up much as we were always waiting to see what the weather would do, so this weekend we have been able to make a lot of changes to get the car more to my liking round here.

“I’d have liked to score more points this weekend, but we’ve been consistent across the three races and and have three solid results to take home.”

Rick Parfitt, #62 EXCELR8 with TradePriceCars.com Hyundai i30 Fastback N, said:
“I’m really pleased this weekend, as my race pace has been really strong – particularly in race three – and I’ve shown that I can be quick in these cars.

“On a bigger circuit where there was less bashing about, I’ve been able to race with the best of them and I’ve made good progress across the three races. To make up ground in the first two races and then hold on to my place in race three was really pleasing and I think it’s been my strongest showing so far and I’ve turned a corner.

“I think I had the pace on a lot of of people this weekend but it’s so competitive that it isn’t always easy to make up places. However, I was able to hound some of the established drivers a bit more and it was nice to get back to my GT days where I was flashing the lights at people because I was quicker. I’m really pleased with how it’s gone.”

Tom Ingram, #80 Ginsters EXCELR8 with TradePriceCars.com Hyundai i30 Fastback N, said:
“We knew we were on the back foot coming here with the weight onboard the car and we had to knuckle down to try and get the most we could from the weekend.

“Race one was all about scoring as many points as possible with the weight onboard, but race two was a real kick in the teeth because I’d pushed hard and done what we needed to do, and then lost it all to the puncture.

“We got some good points from race three and took some back from Ash, which is what we had to do as he has opened up a bit of a gap at the front. It was a solid way to end the weekend and I was particularly pleased to get ahead of Rory on the final lap, as the extra points there could be crucial at the end of the year.”

Jack Butel, #96 EXCELR8 with TradePriceCars.com Hyundai i30 Fastback N, said:
“This is the kind of weekend that I’ve wanted for a long time and to get another points finish and win the Jack Sears Trophy is fantastic. It’s shown what I can do again and I’m over the moon with how I’ve performed across the three races.

“The key thing was that we qualified higher up the order as it meant we were should have been on the grid rather than starting on the back foot, and it was great to be able to fight forwards into the points.

“At both Knockhill and here, I’ve scored points because I earned them rather than because I’ve been gifted them, and hopefully there are more to come.”

Justina Williams, team owner, said:
“Although we would have hoped for stronger results on paper at the end of the weekend, it’s been strong showing for all four drivers at Thruxton. Tom’s performance in race three to set the fastest lap by half a second was an impressive way to fight back from race two, and Chris made good progress across all three races to get up to the top ten.

“I’m particularly pleased for both Jack and Rick because I think this weekend was the strongest one that both drivers have had. Jack has won the Jack Sears Trophy on merit which is a great achievement and Rick’s pace has been hugely encouraging, so both can go home pleased with their performance.”