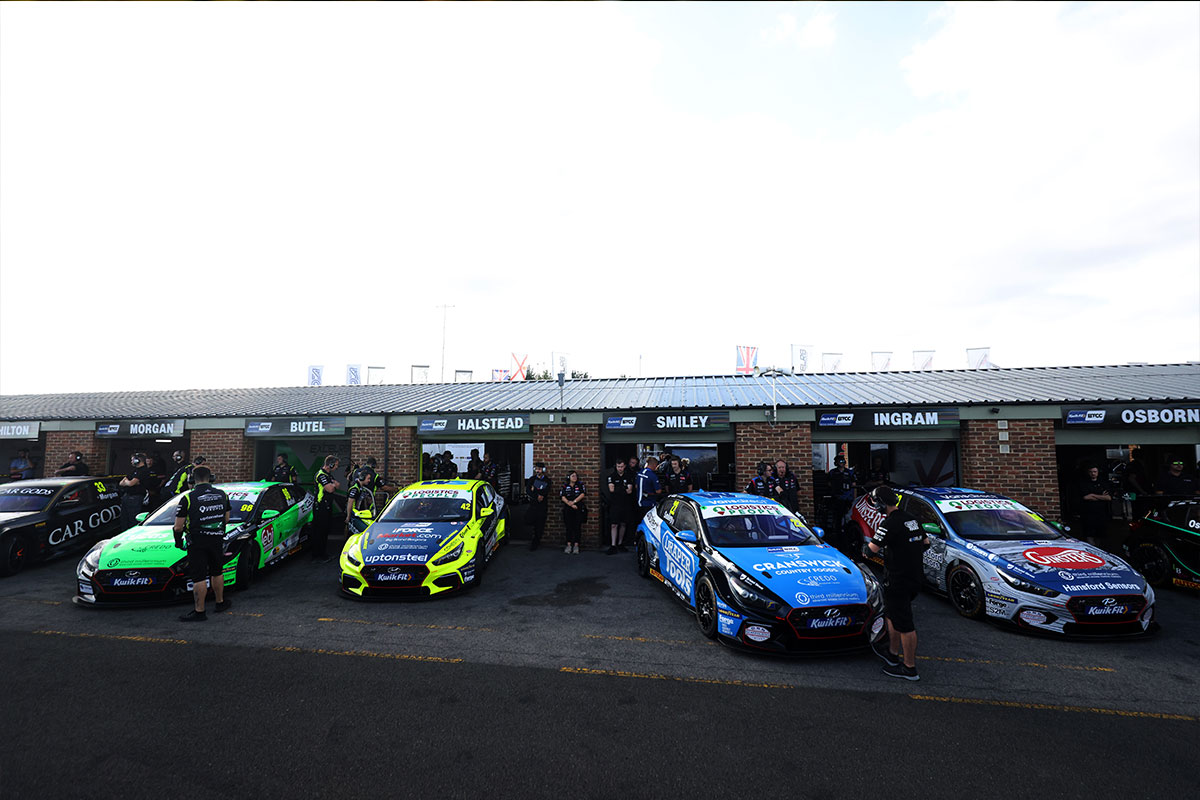 The EXCELR8 with TradePriceCars.com team produced another battling weekend on track to secure a hat-trick of top ten finishes from the seventh meeting of the Kwik Fit British Touring Car Championship season at Croft.

The Suffolk-based team headed for North Yorkshire looking to maintain its title challenge, with the Hyundai squad chasing success on multiple fronts with its four-car driver line-up.

The team headed into qualifying in confident mood after Chris Smiley showed top four pace in practice, but it would be a tricky session as a suspension issue left the Northern Irishman in 13th place on the grid.

Team-mate Tom Ingram, hampered by the additional success ballast for running second in the standings, found himself down in 21st place despite only being eight-tenths of a second away from pole, with Jack Butel in 25th and series debutant Nick Halstead – deputising for the weekend for team regular Rick Parfitt – in 27th.

The opening race would prove to be a solid one for all four drivers, with a strong opening lap for Chris seeing him move up into the top ten. Battling up into eighth at the hairpin on the third lap, Chris then made a fine move on Adam Morgan’s BMW at Tower to secure a solid seventh spot.

The opening lap would also be key for Tom as he jumped up to 16th and by the end of lap three, he found himself running inside the points. The end result would be twelfth place by the time the chequered flag dropped to allow him to put points on the board, whilst also getting rid of the additional ballast on his car.

Both Jack and Nick were able to stay out of trouble to take the flag in 23rd and 26th place respectively.

Race two would be Tom’s time to shine, despite his i30 Fastback N carrying plenty of battle scars as a result of contact in the pack. Up into the top ten on the opening lap, Tom fought hard throughout and was able to take any opportunities that came his way to work his way up to fourth place by the finish; a late move on title rival Ash Sutton at the hairpin being key.

Chris looked set to join Tom in the top ten after another solid drive saw him cross the line in ninth spot, but a post race penalty for gaining an advantage in the early stages would drop him to eleventh.

As in race one, Nick stayed out of trouble to bring the car home successfully in 25th place but Jack would be forced into an unscheduled stop after an incident on a restart saw him make contact with the car in front and dislodged the bonnet, dropping him off the lead lap.

The reverse grid final race saw Tom line up in fourth on the grid and he would retain his place throughout despite pressure from the Honda of Josh Cook, giving him another solid points finish to maintain his championship challenge.

Chris was battling for a second top ten finish when he was unfortunately forced to retire with a radiator issue, although there were best results of the weekend for both Jack and Nick in a race of attrition. Jack avoided trouble ahead at the start to make up places and would eventually be rewarded with 19th place, whilst Nick dropped off the lead lap after a spin at the complex, but was classified in 21st.

Chris Smiley, #22 Ginsters EXCELR8 with TradePriceCars.com Hyundai i30 Fastback N, said:
“We’ve shown good pace all weekend but a little issue in qualifying hurt us a bit and meant we weren’t at the front where we should have been. Passing here is really difficult but we made up ground in the races and were there or thereabouts, and it was just unfortunate in race three that we had the radiator issue.

“It’s been another weekend where we could have got more but we know the pace is there and we just need luck to go our way a bit.”

Nick Halstead, #46 EXCELR8 with TradePriceCars.com Hyundai i30 Fastback N, said:
“This has been a mega experience for me and even though it would have been nice to avoid the spin in race three, it meant I got to follow Colin Turkington for a bit, which was great! That was just a lack of experience on my part, but that happens when things are new.

“Overall, I couldn’t have asked for more in terms of the progress I’ve made although at times I think I gave a bit too much respect to others. However, I think my pace has been good, particularly in the technical parts of the circuit when compared to my team-mates. It was also important to keep the car safe for Rick when there is only a week between meetings, so it’s mission accomplished.”

Tom Ingram, #80 Ginsters EXCELR8 with TradePriceCars.com Hyundai i30 Fastback N, said:
“Considering we started so far back for race one, I’m really pleased to come away from the weekend with two fourth place finishes. Getting up to P12 in the first race was a good start as it left us in a solid position when the weight came for the other races.

“Of course we would like more but we have to be realistic after Saturday and although we have dropped a few places in the standings, that isn’t necessarily a bad thing as it’s still tight between us all, and we have less ballast onboard for the next round.”

Jack Butel, #96 EXCELR8 with TradePriceCars.com Hyundai i30 Fastback N, said:
“I hoped we could fight for points this weekend but Croft has never been my strongest circuit and sadly we couldn’t replicate the results we picked up in recent rounds. I haven’t felt 100 per cent today if I’m being honest so all things considered, I’m pleased with how I’ve driven.

“The race pace has been solid enough but it’s been so close on the times that making up ground was never going to be easy. I’ll look ahead to Silverstone and put this one behind me now.”

Justina Williams, team owner, said:
“We’ve scored more good points this weekend, although the results in qualifying proved to be key. When the grid is so competitive, it isn’t always easy to make up places, so for Chris and Tom to both come away from the weekend with top ten finishes to their name is good and it shows what a strong race package the Hyundai is.

“It’s a shame for Jack that he couldn’t fight for more points but three solid results when he was feeling under the weather is still a good weekend, and Nick did everything we asked from him and stayed out of trouble for three finishes.

“With a quick turnaround to Silverstone, we’re going to go there hoping to fight for more points and more silverware to keep our championship bid on track.”