EXCELR8 with TradePriceCars.com aims to carry Scottish speed to Thruxton 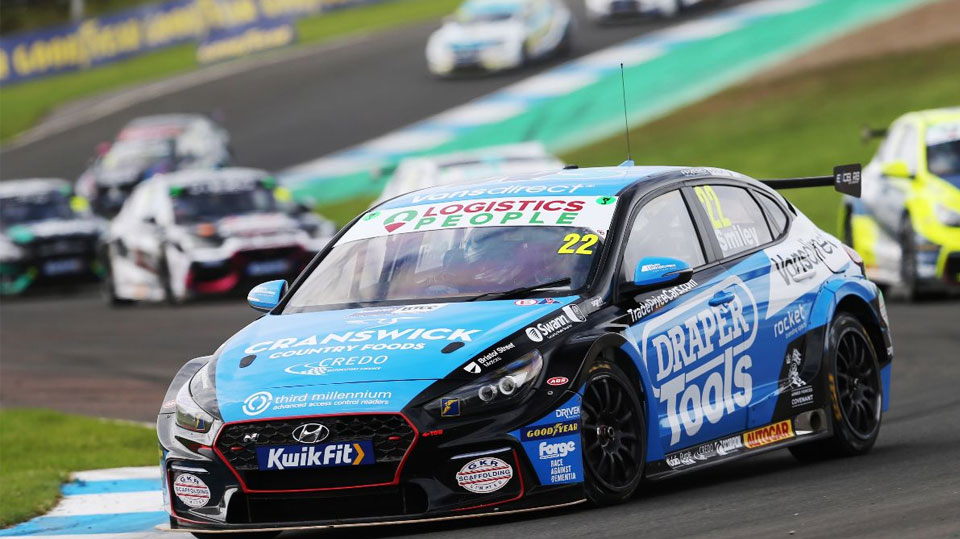 EXCELR8 with TradePriceCars.com aims to carry Scottish speed to Thruxton

The EXCELR8 with TradePriceCars.com team will seek to add more silverware to its ever-expanding collection when the Kwik Fit British Touring Car Championship returns to Thruxton this weekend for the sixth round of the 2021 season.

The Suffolk-based team secured a third victory of the year last time out at Knockhill, with the Scottish race weekend proving to be one of the most successful of the campaign for the four-strong Hyundai squad as it further showed the potential of the i30 Fastback N in Britain’s most competitive racing series.

On his debut at the wheel of the Hyundai back in May, Tom was able to impress from the outset as he qualified on the second row of the grid before going on to match what was then the best result for the team with a fine second place in the opening race of the weekend.

From that moment on, the two-time Independent Champion has been a firm fixture towards the head of the championship standings at the wheel of the ever-improving Hyundai, and will hope to keep the pressure on in the title race despite going into the weekend saddled with 66kg of success ballast.

Chris Smiley heads for Thruxton on the back of a strong weekend in Scotland, where he secured his best qualifying and race results of the campaign.

The Northern Irish racer matched his best starting position with the team after going third fastest in qualifying and then picked up a brace of top six finishes on race day – the latter after a battling drive through from 13th on the grid after a stall at the start of race two cost him valuable places.

Chris endured a difficult start to his campaign when he got caught up in someone else’s accident in the opening round of the year, but returns to the fastest circuit on the calendar feeling more at home with the revised Hyundai and confident of being in the mix towards the sharp end of the field.

Jersey-based racer Jack Butel also heads for Thruxton – the closest thing he has to a home circuit – in confident mood on the back of his best weekend of the season two weeks ago at Knockhill, where he was able to score his first points finish of the campaign.

Recovering well from a difficult qualifying session, Jack showed hugely impressive pace across race day as he battled his way forwards to match the best result of his touring car career, and came close to scoring further points in race three.

Having scored a pair of top 20 finishes in the Thruxton season opener, Jack will hope to continue with the forward progress made in recent events to fight for more points whilst also strengthening his position in the Jack Sears Trophy, open to those drivers who have yet to score a BTCC podium finish.

Rick Parfitt meanwhile heads for Thruxton looking to bounce back from a tricky weekend in Scotland, where on track contact prevented him from challenging for the first points finish of his BTCC career.

The multiple GT champion had raced well to put himself firmly in the mix for a maiden top 15 finish before being spun out of the second race of the weekend – leaving him unable to then make the most of the pace in his car in race three as he found himself battling in the pack.

On his series debut at Thruxton back in May, Rick came agonisingly close to scoring points on his first weekend in the series and returns this time around aiming to make the most of the extra experience he has gained in the Hyundai to fight his way further up the order.

Chris Smiley, #22 Ginsters EXCELR8 with TradePriceCars.com Hyundai i30 Fastback N, said:
“I feel I really turned a corner with the car at Knockhill last time out, and that leaves me feeling hugely confident going back to Thruxton. I had a bit of a rough ride there at the start of the season through no fault of my own, and return this weekend keen to try and push for the strong results that I know we are capable of.

“With no success ballast in the car, the first goal has to be to try qualify towards the front of the grid – as we did in Scotland – because that will give us the best possible opportunity to try and bring home a trophy on race day.

“In the last few rounds in particular, our race pace has been really strong and I see no reason why this weekend will be any different, so hopefully we can be right up there in the top ten and in the mix for a podium finish.”

Rick Parfitt, #62 EXCELR8 with TradePriceCars.com Hyundai i30 Fastback N, said:
“I’m really looking forward to this weekend, and going back to a circuit where I have raced the Hyundai as it means I have some frame of reference to work with!

“Back at the start of the season, I came close to scoring points on my first outing in the series, and since then, I have been able to learn a huge amount about racing these cars as they are so different to what I have competed in before.

“My race pace has been improving all the time and I know that I have the speed to break into the top 15, which has to be the goal. I’ll be giving my all to put some points on the board this weekend, and hopefully by Sunday evening, I’ll have given the ‘Parf Army’ reason to cheer.”

Tom Ingram, #80 Ginsters EXCELR8 with TradePriceCars.com Hyundai i30 Fastback N, said:
“I feel in a good place as we return to Thruxton this weekend, and am confident that we will be even stronger than we were back in May.

“With five race meetings under our belt, we are working better as a team, and we also have a car that has improved significantly since round one, which is what you would hope to see as a season goes on.

“As has been the case in the last few rounds, the weight we have to carry into the weekend is going to hamper us in qualifying and round one, but Thruxton is the kind of circuit where it is a bit easier to then make up ground as the weight comes out across the weekend.

“The rear-wheel drive cars have been coming on strong in recent events but we will keep pushing hard to take the fight to them in the championship and I’m going into this weekend keen to score as many points as possible to keep our title bid on track.”

Jack Butel, #96 EXCELR8 with TradePriceCars.com Hyundai i30 Fastback N, said:
“I came away from Knockhill on a real high, and I want to carry that on when we return to Thruxton. When we were there for the opening round, we had a nice base set-up to work with but I didn’t really know the car, and since then, I have been able to learn a huge amount and we have much more data behind us.

“From Brands Hatch onwards, I feel we have had a car that was capable of fighting for points finishes, and now we have achieved that, I feel confident that we can do it again and start to regularly challenge for top 15 results.

“I know it’s the same for everyone, but the fact that I have raced the Hyundai at Thruxton already is a huge bonus going into this weekend and it means we can hit the ground running in practice and work towards trying to improve in qualifying.

“I need to try and get myself up towards the top 20 on the grid as that is where we should be, and then make the most of the strong race pace we have shown in recent meetings to try and get more points on the board.”

Justina Williams, team owner, said:
“After a strong showing at Knockhill, we return to Thruxton this weekend in bullish mood and confident that all four drivers can impress on track.

“We know that the Hyundai is capable of fighting at the front around Thruxton from the opening rounds of the season, and a lot of hard work has gone in since then to improve the car – which has been reflected in the results.

“The aim every weekend now has to be on pushing for more points and silverware to maintain our title challenge, and it is important that we keep focused on the job at hand as we head into the second half of the season.”