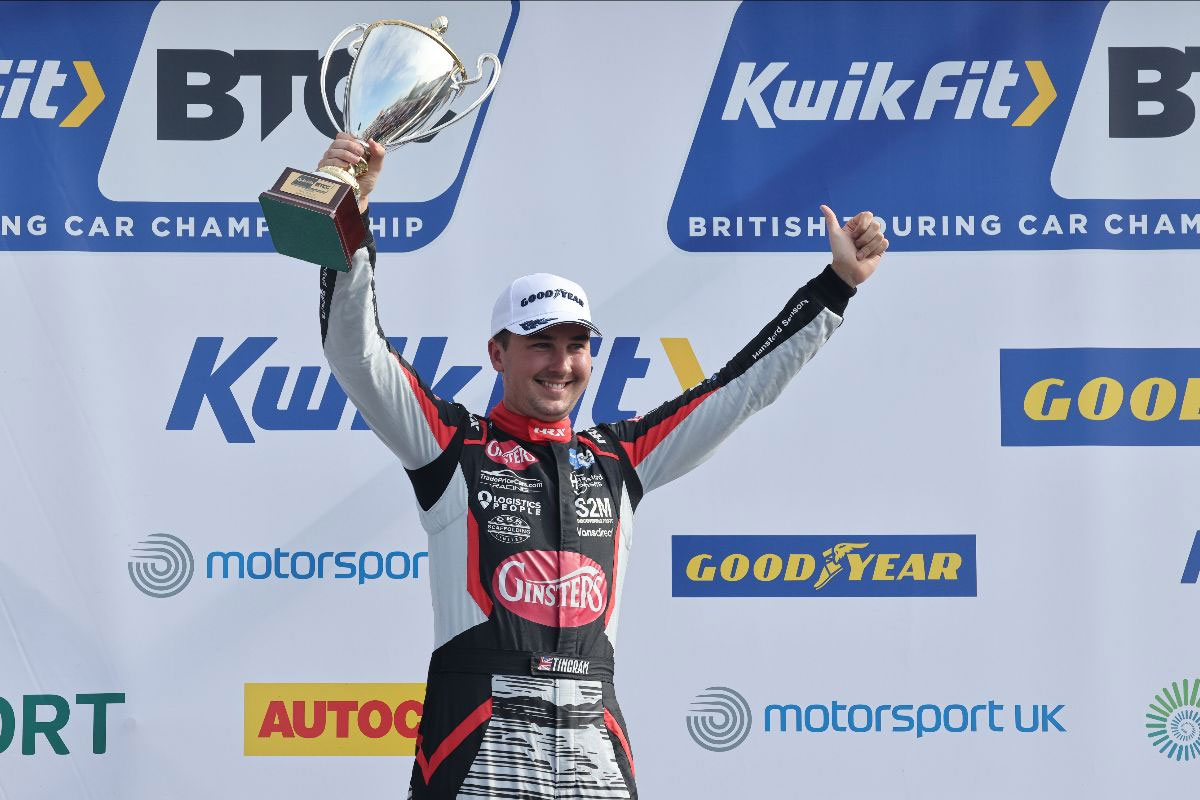 The EXCELR8 with TradePriceCars.com team enjoyed another strong weekend on track as the Kwik Fit British Touring Car Championship headed for Silverstone for round eight of the campaign.

The Suffolk-based team went into the second of back-to-back meetings aiming to impress with drivers Tom Ingram, Chris Smiley, Jack Butel and Rick Parfitt all optimistic that the short National circuit would be well suited to the Hyundai i30 Fastback N.

Free practice would be an encouraging start to the weekend as Chris topped the times for a large part of FP1 before being pipped by just 0.010s at the end, with Tom also in the top ten and Jack and Rick both within a second of the pace. Second practice then saw Tom end up sixth quickest, with Jack an encouraging tenth, Chris in 15th and Rick in 23rd – leaving all four drivers in a solid position going into qualifying.

Silverstone marked the return of the two part qualifying session seen at Snetterton, with the top ten drivers in the first stage of qualifying going through to Q2 and the battle for pole.

Tom would safely make it through with the third best time and was almost joined by Chris, who ended up 15th on the grid but with a best time that was only 0.060s away from the top ten.

Jack would end up 19th on the grid despite having a theoretical best that would have been good enough for P4 and a shootout slot, with Rick in 27th place but having also shown the potential to run higher.

Once Q2 got underway, Tom vaulted up into provisional pole and looked set to secure his place at the head of the field before being edged into second place by Rory Butcher by just 0.016s.

The opening race of the weekend on Sunday would result in the team adding to its ever-growing list of silverware, with Tom managing to jump ahead of Butcher off the line to secure the early lead. The ballast-light Toyota would get ahead on lap three, with Tom then putting in a fine drive to keep Dan Lloyd’s Vauxhall at bay as he picked up a solid second place.

From 15th on the grid, Chris kicked off race day with a solid 13th place to pick up more points, with Jack battling ahead of Tom Chilton’s BMW and then Jake Hill’s Ford Focus to take 18th – his impressive pace seeing him set the fastest first sector time of anyone in the race.

Rick’s pace was also impressive, particularly towards the latter stages, as he started the day with 23rd place.

Tom would slot into second place at the start of race two and would spend most of the race in a frenetic battle to keep the faster Honda of Josh Cook at bay. Cook eventually managed to sneak ahead after a mid-race safety car period, with Tom able to stay ahead of Colin Turkington’s BMW to the finish to take a second podium of the day.

He would later be promoted into second spot when Cook was excluded from the result, which also handed Chris more points from the race after he fought his way into the top ten.

A strong opening lap saw the Northern Irishman get up into tenth spot, and solid moves on Lloyd’s Vauxhall and the BMW of Stephen Jelley saw him cross the line in eighth spot before he was then moved up into seventh.

Jack would come close to a fourth points finish of the campaign as he was classified in 16th place, with Rick recovering from losing ground on the opening lap after contact to take 25th; the biggest encouragement being the fact that he would set the fastest lap amongst the Hyundai quartet for the first time.

The reverse grid final race saw Chris starting in fifth spot and he wasted little time in moving up to fourth ahead of Jason Plato, and then grabbed third from Jelley on lap four. A podium finish looked to be on the cards until he was overhauled by points leader Ash Sutton six laps from the end, although fourth place was a strong way to end his weekend.

The additional ballast on Tom’s car would hamper his chances to replicating his earlier results, and he would fight hard in the lower reaches of the top ten before taking the flag in twelfth spot; the points across the weekend moving him back up to second in the title race.

Jack’s pace had shown he was capable of pushing for points, but he would lose ground when forced to take avoiding action when two cars clashed ahead on the exit of Copse. That dropped him down the order to finish in 23rd spot despite again showing pace to run much higher up the pack, and it was a similar story for Rick – who was delayed at the start when a car in front failed to get away off the line but then lapped quickly and consistently to take 22nd.

Chris Smiley, #22 Ginsters EXCELR8 with TradePriceCars.com Hyundai i30 Fastback N, said:
“I think if it had been any driver other than Ash behind me in the final race, we’d have had a podium today but he was just too quick. However, I’m pleased that we were able to get into the position to fight for a podium considering where we started as we had to push forwards for it.

“The car felt brilliant in FP1 and the times were doing there were really strong, but for some reason, it wasn’t quite as good for the remainder of the weekend. Track conditions changed quite a lot and that seemed to affect my car but we’ve come from 15th on the grid to take two top tens and went close to a podium, so we’ve had worse days.”

Rick Parfitt, #62 EXCELR8 with TradePriceCars.com Hyundai i30 Fastback N, said:
“I’d have loved better results on paper, but I think this has been my best weekend in terms of how I’ve driven and my pace has been really strong – as I showed by being the fastest Hyundai in race two.

“I got hit early on in race two which cost me ground but I got my head down from that point on and made some solid overtaking moves, and my speed was the best it has been. It shows that the pace is coming now, and it’s now a case of getting a bit further up the order so I don’t get caught up in the melee that you can find in the pack.

“I can take a lot of confidence from this weekend, particularly knowing that I have two circuits still to come that I really enjoy.”

Tom Ingram, #80 Ginsters EXCELR8 with TradePriceCars.com Hyundai i30 Fastback N, said:
“We made up ground on Ash in the standings in the opening two races which was really good, and it showed the impact that carrying weight into a weekend has had in recent events. The reverse grid is always tough when you’ve been on the podium in race two, because you are up against cars that are a lot lighter than you so it was a case of getting what we could from it.

“We’ve closed the gap slightly in the points, although it would have been nice to get more, and we’re back up to second in the championship. Ash still has a buffer but we just need to get our heads down and reflect on a job well done this weekend, with a solid haul of points and two trophies to take home.”

Jack Butel, #96 EXCELR8 with TradePriceCars.com Hyundai i30 Fastback N, said:
“I’m taking a lot of positives away from this weekend as the pace we have shown throughout has been really strong. Had I been able to hook up my best lap in qualifying then we’d have been in the top ten shootout for qualifying, which would have been a massive achievement.

“Race day proved to be a bit more tricky as even though we had a quick car, we didn’t have track position and there were a few things that didn’t go my way. It’s a nice feeling to come away from the weekend with my first purple sector however, and I hope we can replicate this pace when we go into the final two rounds and the season on a high.”

Justina Williams, team owner, said:
“It’s been another strong weekend on track for all four drivers and we remain right in the mix for the championship, which was our goal coming into Silverstone. Tom did a great job to pick up two podium finishes, particularly in race two with the additional ballast, and Chris   has driven really well today to secure his best finish of the season so far.

“Although they didn’t manage to score points, the pace that both Jack and Rick have shown this weekend has been hugely impressive and they both deserved more than their results on paper.

“The performance of all four drivers leaves us confident of a strong end to the year across these final two rounds.”