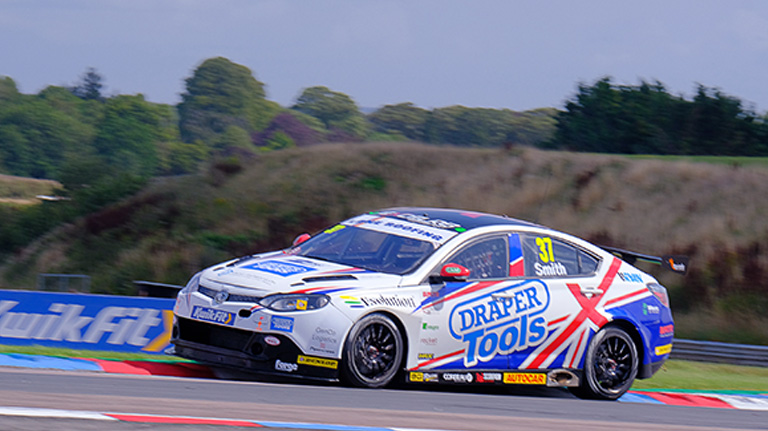 The seventh round of the British Touring Car Championship may not have delivered another haul of points for EXCELR8 Motorsport, but there were still plenty of positives to be taken away as the crew continued to eat into the performance deficit at Thruxton.

Any visit to the high-speed Hampshire track is always a tough test for any team new to the BTCC. Due to its flat-out, high-degradation nature, the cars can be ultra-sensitive on setup, meaning small changes can have particularly large impacts at Thruxton.

Having shown truly impressive pace last time out at Snetterton – particularly on the softer Dunlop tyre – for safety reasons all teams were limited to Dunlop’s harder rubber only for Thruxton, making the job of finding a good balance between outright speed and driver comfort even more difficult to strike.

However, having struggled during the opening free practice sessions, both Rob Smith and Sam Osborne made notable progress with their MG6 GTs to end the weekend with both respectable times and results.

Qualifying was a challenge. Smith changed setup across Saturday, and was still searching for the ideal balance into the first competitive session. He would start 28th, while Osborne had other issues after a strange collision with Mark Blundell’s Audi through Cobb corner wrecked his chances of improvement from 30th. Both drivers were disappointed, but knew there was more to come.

Sunday showed improvement from the start, with Smith climbing multiple places in the early laps of race one to run as high as 23rd as he got stuck in to a tight battle with Jack Goff’s Volkswagen an Nicolas Hamilton’s Ford. Smith stuck his ground well, and was unlucky to lose out to Goff on the final lap when the VW man managed to squeeze past into Church corner, leaving Smith 25th at the flag. Osborne, too, made strong early progress, but was struggling with the balance of his car around the fast sweeps. Despite climbing to 24th early on, he slipped back to 28th at the flag. However, the result still showed both drivers moving forward from their starting positions.

Race two was more of the same, with Smith leading the line for the MG6s, starting 25th but climbing to 23rd at the finish courtesy of some brave overtaking on Aiden Moffatt’s Infiniti and Michael Crees’s VW. Osborne held his own in a tussle with Hamilton and Senna Proctor’s Subaru to finish 28th.

The final outing of the weekend proved even trickier, thanks to the additional element of rain toward the end. While the field lined up on a fully dry track, the heavy clouds overhead threatened to upset the order, and the rain arrived with just a handful of laps remaining.

While Thruxton didn’t bring any more points, it did bring a whole heap of confidence as EXCELR8’s MG6s continue to show potential to consistently get amongst it with the more experienced teams.

Rob Smith said: “Sneaking under the surface, that was a very positive weekend. Sure, the numbers next to our finishing positions weren’t particularly great, but what we’ve had over the weekend are probably the best two consecutive race days we’ve had this year – starting from FP1 and closing up pretty much a second in pace to the top guys. There’s a real positive there. Having broken free of that gaggle of eight cars at the back and pushed more toward the midfield, I think what we’ve done with the setup will work even better at a more conventional circuit and not one where we’re restricted with the harder tyres, which we tend to struggle on a bit. What I needed was a weekend where I moved forwards, and I certainly had that this time.”

Sam Osborne added: “It’s just not really been my weekend to be honest, which is a shame after Snetterton, but that’s racing for you. I struggled with setup all weekend here and there’s still some more work to do on that side I think, but we’ll keep our head up and keep working and it’ll all come together I’m sure. Knockhill next will be an interesting one as I’ve never driven the track, so I think I’ll get on the PlayStation for a bit of practice first! The free practice sessions will be really vital for us up there as running will be limited, so fingers crossed and we’ll see what we can do next time out.”

EXCELR8 team manager Oliver Shepherd added: “It’s been a bitter-sweet weekend, basically the opposite of Snetterton. Rob’s made some really positive progress and has moved forward all weekend, yet we’ve had to do quite a lot of work for Sam and haven’t quite been able to get the car where he needed it to be. We’ve got a few things that we want to try going forwards and we did make some progression in the last race, but it’s a shame we couldn’t put that together at the start. Next up is Knockhill, which will be a huge challenge as we haven’t been there as a team before, so we’ll take that one as it comes.”

The next round of the British Touring Car Championship takes place at Knockhill in Scotland on September 14/15.