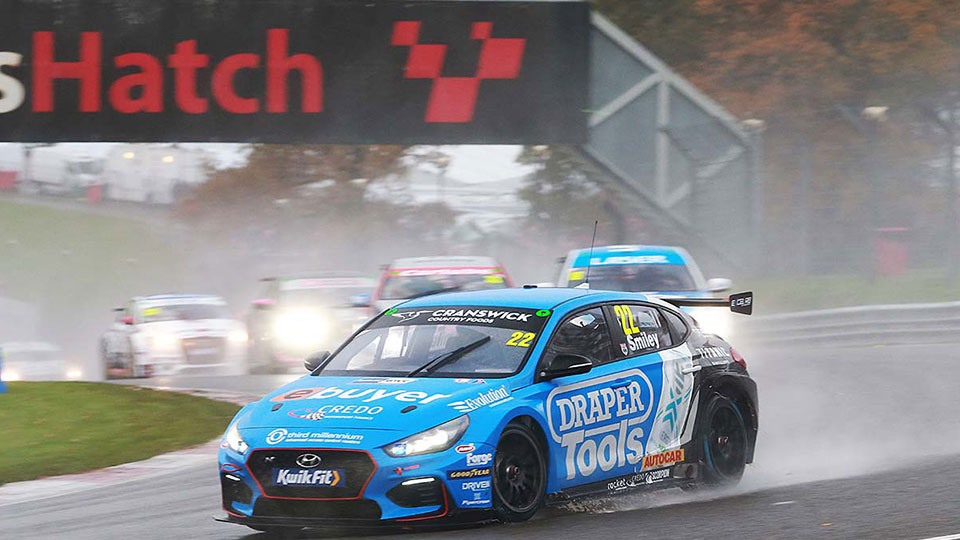 A dramatic end to the season saw EXCELR8 Motorsport leave the Brands Hatch Indy circuit with fifth in the Independent’s Teams Championship. From humble beginnings in the series during 2019, EXCELR8 have grown to be an established force in the British Touring Car Championship.

The weekend welcomed two major announcements for the team, as Trade Price Cars confirmed they would be coming on board to partner the up and coming Suffolk-squad ahead of the 2021 campaign. While long-term sponsors Draper Tools confirmed the continuation of their partnership that has been nurtured since the beginning. Heading into the winter, EXCELR8 is confident of the bright future that lay in front of it.

On track, rain proved the great leveller for many of the drivers. Chris Smiley ended his season with a run of three straight points finishes, while Senna Proctor recorded another top ten, to ensure that both drivers finish the season inside the top ten in the Independents Drivers’ standings. In the Overall standings, the team would end the year on 246 points, a substantial improvement on the 4 they recorded in 2019.

Damp and dreary conditions would welcome the Hyundai’s for the season finale. With only one free practice to get their cars set up, both drivers nestled within the top ten as the skies dried up towards the midpoint of proceedings, Smiley eventually ending the session under a second behind pacesetter Jake Hill (MB Motorsport).

The rain continued for qualifying, now more heavily than in practice. Unfortunately for Senna Proctor, a wheel on the grass at Druids saw him skate into the barrier in the opening five minutes, setting him back for the weekend. Unfortunately, the incident meant his best time was deleting, ensuring he started Sunday from 27th.

All attention switched to the skilled hands of Chris Smiley. Several other drivers also struggled with the slippery conditions, sliding off, as the Northern Irelander leaped into the top fifteen on his first flying lap.

A second red flag was caused by Practice pace setter Jake Hill, proving that even the best drivers were struggling to keep it on the tarmac. The final ten-minute sprint saw a shake up of the times as the track had gripped up slightly, ensuring it was vital for Smiley to improve his run. A slight excursion with three minutes to go at Paddock Hill prevented him from challenging the top 10, finishing with a best of 55.769 to line up 15th.

Determined to make up for the undesirable result of Saturday, Chris Smiley was up two places on the opening lap, continuing forward to scythe past Aiden Moffat (Laser Tools Racing). Proctor likewise was not one to slouch, working his way towards the top 20.

By the time the safety car was called, Proctor had gained 8 places, while Smiley was running 12th. The next target for the Cranswick Food sponsored driver was Stephen Jelley as Smiley closed in on the top ten.

His run though would be temporarily halted by Adam Morgan (TripleR Racing) and Tom Chilton (BTC Racing) as the conditions became trickier. Crossing the line in 13th, Smiley set himself up for a promising race two. Proctor meanwhile would settle for 19th, gaining the most places of any driver.

After the rain of race one, the second race proved a crossover as the track was starting to dry. The EXCELR8 drivers opted for dry tyres, proving to be a wise decision as the race played out. Carnage in front allowed Smiley to make the most of the start, jumping four places in his Credo-sponsored Hyundai to run ninth.

Proctor’s drive up the order was steadier, picking off the competitors one-by-one and by lap six, was not only inside the points, but now on the tail of his teammate. By the end of the race, with some assistance after the wet tyred drivers fell off the cliff, Proctor had gained an incredible 11 places.

Smiley likewise was in a forward-thinking mood, finishing eleventh, which gave him the front row for the reverse grid. Gaining the most places of any driver over the first two races, Proctor would also be one to watch in the Evolution-badged machine, finishing 8th.

Torrential rain peppered the circuit minutes before the race, hindering the EXCELR8 cars setup. Starting on the front row, Chris Smiley was determined to end the season on a high. Battling with polesitter Aiden Moffat though, he was pushed off wide at Graham Hill bend, losing his podium place and dropping out of the points.

The conditions were proving almost impossible for Senna Proctor as well, who disappointingly had to drop outside the top ten, before losing his points position due to another incident. Attempting to fight back, Smiley found himself hindered by Tom Oliphant (Team BMW), then Tom Chilton (BTC Racing), preventing him from regaining a top ten finish.

The twelfth-place finish for Smiley, helped the team secure fifth in the Independent’s Team’s standings, as well as seventh in the overall Team’s Standings. A vast improvement on their 2019 result, the team was delighted with the progress they’ve made throughout one of the most unique BTCC seasons to date.

“Thank you to everyone that has been involved with us this year, to see how the team has grown over the last 12 months is exceptional. The hard-work and dedication from our team has been key in developing this brand new Hyundai, and now we have had a chance to test them out at the UK’s premier motorsport venues, I’m eager for a new start as we head into 2021 with our partners.”

“We’ve been really proud of the work that our drivers have put in as well.  Chris’ pace on Sunday in the last race, being the 4th quickest, proves how we could be easily battling for a win in the future, while Proctor’s overtaking was key to helping us secure fifth in the Independent Team’s championship, I’m looking forward to the winter to get some testing under our belts and new season ahead.”

“We were really quick in that race three and could have been on the podium, unfortunately Moffat took me off. We’ve made a lot of changes to that car and it’s really worked, Daniel Bishop my engineer has done a fantastic job this round having only started working with me last weekend, cannot thank him enough.”

“We didn’t get the podium that we deserved, but I’m glad we got the points and we found a setup on the wet that works on the car, so it has certainly been a positive way to end the year. Thanks to all the sponsors that Justina has as without them we wouldn’t be able to go racing and it’s a credit to all the team that have been working so hard this year.”

“It was fantastic to help the team achieve fifth place in the Independents standings as well as seventh in the Overall Teams Championship. Qualifying and the rain did hamper the best running we had today, but my race one and two proved just how well this Hyundai can overtake when it matters.

Without Draper Tools and all our sponsors investing in what we do, as well as the platform the BTCC provide for their marketing, it wouldn’t be possible to do what we do. Thank you to everyone who has been behind us this year.”