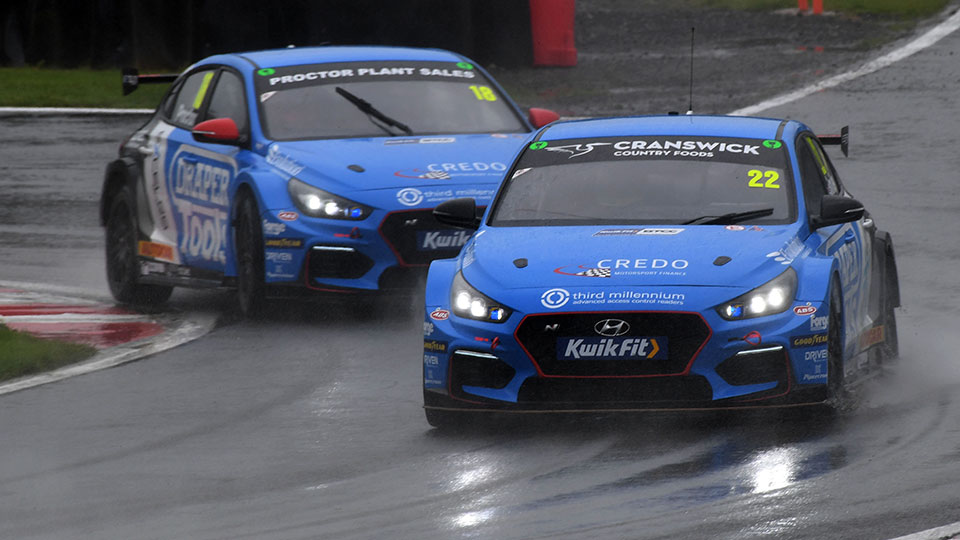 The third Kwik Fit British Touring Car Championship round took place at a mixed condition Oulton Park with both EXCELR8 Motorsport cars back in action. The wind and rain presented a new test, yet the team matched the challenge, producing their first perfect sweep weekend, as both Chris Smiley and Senna Proctor scored in every race, regularly working together on track.

Such was the difficulty of the conditions, of the teams with more than one machine, only EXCELR8 and defending drivers’ champions Team BMW saw all their cars score points in all three races.

Race three proved the highlight for the Credo-sponsored team, with Senna Proctor knocking on the door of the top five until an early red flag halted his progress. While Chris Smiley, moved back into the top ten of the Drivers’ championship.

Dark skies would greet the Hyundai i30’s for the first time this year, with Chris Smiley the first venturing out on a damp track. Switching between wet and dry tyres it was a new experience for the team who gathered valuable information during practice. Senna Proctor was eager to continue his run from Brands Hatch, finishing the first session sixth in the Independents.

Unsettled weather would make practice data crucial for the weekend as Smiley and Proctor both got on with rubbering in the Scorpion-sponsored machines. Like Proctor in FP1, Smiley proved to be a leading Independent. After a red flag stoppage, the 28-year-old was quick to utilise the free track, going fourth fastest overall.

The rain had gone for qualifying, but temperatures were still cool catching out many on cold Goodyear tyres. Proctor had no such issues though, jumping to third on his first competitive lap. Times tumbled but at the midway lull, Smiley was the top Hyundai in eighth.

Track limits would see two of Proctor’s times deleted with both cars knocking on the door of the top ten. Chris Smiley’s late push would give the team a small rebuilding task after running over the kerbs at Druids. Despite this, Smiley led the pair with a 1:26.264, while Proctor lined up 14th with a 1:26.523.

A sodden circuit greeted the EXCELR8 pair, along with a delayed start after trouble for Carl Boardley (Team HARD) saw him run off into the barriers on the formation lap, proving just how tricky the conditions were.

Both Smiley and Proctor ran line-of-stern at the end of the first lap, chasing the battle for the top ten. Ballast-free, Smiley was soon on the move, fighting Brands Hatch race winner Tom Oliphant (Team BMW), allowing his teammate to follow through a lap later. As the rain lashed down, Smiley settled in, with a lot of free space in front of him.

Catching former-champion Ash Sutton by the conclusion of race one, Smiley had preserved a valuable set of wets as Proctor eventually followed him home in for a double top ten finish after Josh Cook (BTC Racing) was disqualified.

The wet track would not favour the standing start on the sloped Oulton grid, with Smiley and Proctor both dropping a place behind the charging Bobby Thompson (TradePriceCars). Smiley, carrying 6kg of ballast for his race one success.

Working together to see of the challenges behind, Smiley would put up minimal resistance to the charging Proctor, who set about chasing Thompson. Smiley’s extra weight dropped him a few places, but once again another double points finish welcomed the Draper Tools-sponsored EXCELR8 pair, setting them up for a charge in the final encounter.

As the rain dried up for the final race of the weekend, both Proctor and Smiley in prime position to challenge the front runners. A cool head and smart driving from Proctor saw him gain five places on only the opening lap, with Smiley jumping three.

Both continued their forward momentum as the race wore on, with Proctor eventually getting stuck behind Tom Chilton (BTC Racing) in the battle for the Independents podium. Sadly, for Proctor the chance of a maiden EXCELR8 podium would be denied as a crash further back between Stephen Jelley, Nicholas Hamilton and Ollie Brown brought out the red flag and an early end to the weekend.

Smiley had scythed his way into the top ten and was running ninth by the time of the stoppage just over a second behind the battle for seventh. The weekend results see EXCELR8 leave Oulton Park fifth in the teams’ championship on 94 points.

“This weekend proved just how adaptable we are to all challenges mother nature can throw at us! To leave Oulton with both cars scoring in every race and no major damage is something only one other team can claim. The consistency we’ve shown is a testament to the work and dedication shown by the whole team. Roll on Knockhill.”

“We’re learning at every weekend we go to with a new track and a little bit of weight. We leave here very optimistic. Every weekend we leave with a list of things to do and that list gets smaller every weekend. We have our starts sorted out now, collecting 2 top tens and 3 points finishes, no major damage. We entered the weekend twelfth in the standings and left in ninth, so plenty of optimism to take into Knockhill.”

“On Saturday I didn’t extract the most out of the car, we got caught out in the dry a little bit. We had two consistent races on Sunday morning and made a step forward with the car in the wet and then a great last race to finish off the weekend. We seemed to find a lot of pace in the dry, so we’ll hope to carry that pace forward to Knockhill, where we’ll crack on for three more good results there.

“We experimented some changes to the car in race three and it paid off. We had a look at it after Brands Hatch and we wanted to throw it on the car in Qualifying, but it was never dry all weekend. We had nothing to lose in race three, so we gave it a stab and away we went.

EXCELR8 Motorsport is back this weekend (29th – 30th August) for the fourth round of the BTCC season at Knockhill.