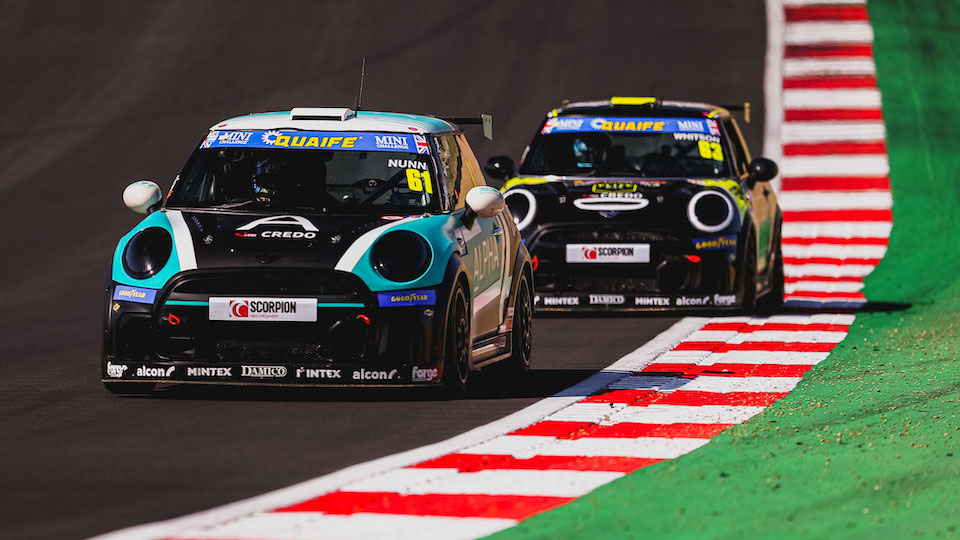 EXCELR8 Motorsport has boosted its Quaife MINI CHALLENGE entry for the final rounds of the 2022 season with the addition of Harry Nunn to its multi-car entry in the headline JCW class.

The Newmarket racer switches to the Suffolk-based team for the final two events of the campaign at Silverstone and Brands Hatch Grand Prix looking to realise his potential after a challenging year to date in the British Touring Car Championship support series.

Harry joined the JCW grid this season on the back of a hugely successful two-year spell in the Cooper class, where he secured championship honours back in his rookie campaign.

Last season, he remained in contention for the crown right through to the season finale, when an unfortunate incident in the opening race at Silverstone ultimately ended his hopes of back-to-back titles as he had to settle for fourth in the final standings – albeit as leading Graduate Cup racer.

A tricky season thus far since moving up into the JCWs has seen Harry take a brace of top 20 finishes, with his best result to date coming at Knockhill where he fought his way to 17th place in the final race of the weekend.

Eager to improve on those results through the final six races of the year, Harry now switches to the EXCELR8 Motorsport team that has secured the JCW title for the past two seasons.

Harry will hope to benefit from extensive experience of the multiple champions to push forwards towards the top ten, with the talented youngster hopeful of a strong end to his rookie season to lay the foundations for 2023 and beyond.

His first outing with EXCELR8 will come at Silverstone on the weekend of 24/25 September.

“Having spent two seasons fighting for the Cooper championship against EXCELR8, I know what a top team it is, and it’s great for me to now be joining the line-up for the rest of the season.

“Moving into the JCWs, I knew this season was going to be a big challenge but I think it’s fair to say that I was hoping for more in terms of results by this stage and I feel the time is right for a change.

“EXCELR8 has a huge amount of knowledge and experience, and my goal is to benefit from that to try and push forwards towards the top ten, which is where I hoping to be over the course of the season.

“The most important thing is to enjoy the final six races of the season, and hopefully that will help me fight for some improved results to then set me up for 2023.”

“There is absolutely no doubting the fact that Harry is a very quick driver, as we have been able to see first hand when he was fighting for the Cooper title against us in recent seasons.

“Although he hasn’t yet been able to replicate that kind of form in the JCWs, we know he has the talent to fight higher up the order, and hopefully over the course of the final two rounds, we can help him to unlock more of the potential we know he has.”