EXCELR8 Motorsport Launch Back into Action This Weekend 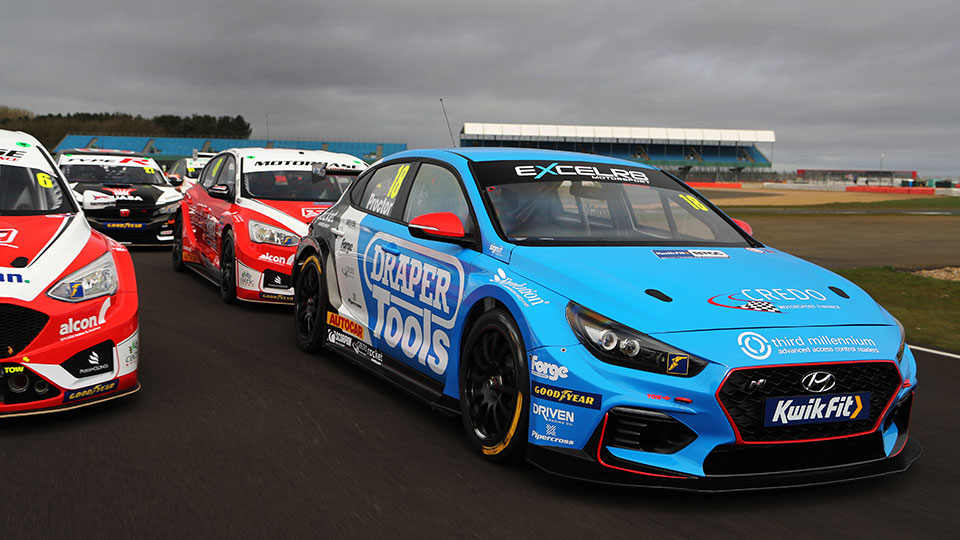 EXCELR8 Motorsport Launch Back into Action This Weekend

The Kwik Fit British Touring Car Championship is back in business this weekend! With it, the return of professional racing for EXCELR8 Motorsport. The Suffolk-based team is raring to go for the opening round at Donington Park (01/02 August), as they fortify the foundations for the year ahead.

Over the winter, EXCELR8 have had more than a lick of paint to spice up their 2020 title fight, with the introduction of two new powerhouses in the form of the Hyundai i30 Fastback N Performance. A brand-new car and manufacturer for a new era in the BTCC is the pinnacle of a winter of revolution, in which the team aims to move forward in the battle for silverware.

2019 saw the teams maiden exploits into the heart of the UK’s top Touring Car series, recording a ‘Spirit of the Championship’ Award for the best dressed and most innovative garage, a prestige that will be built upon as they become a force on the national racing scene. That innovation has not stopped with the introduction of new engineers and technical staff, including multiple-British Touring Car Championship winning engineer Kevin Berry, who will lead the on-ground operations.

This high-flying mentality has continued over into the driver pairing, obtaining the expert services of two BTCC-race winning drivers.

Chris Smiley joins the team after three seasons at BTC Racing, during which time he recorded a win, pole position and multiple podiums. Smiley is expected to be a natural addition to the team and has spent the winter getting to grips with the staff and their new car.

He is joined at EXCELR8 by another equally as talented young driver, Senna Proctor. The 21-year-old has spent his career in the TOCA paddock, starting out in the Ginetta Junior Championship, where he finished 2015 as vice-champion, even scoring the most overall points. After graduating to the BTCC in 2017, recording the Jack Sears Trophy, Proctor has quickly grown in stature, pulling off an incredible underdog victory at the 2018 Brands Hatch season opening weekend. Further podiums have followed since and he will be aiming to jump straight into proceedings this weekend.

While it will only be EXCELR8’s second year in the BTCC, the team is expecting a steep trajectory in the coming months, building upon the 11 years of experience the outfit already possesses from other series.

Team Owner Justina Williams is adamant of her team’s outlook as we head into Donington Park.

“At last, we start racing after the longest ‘off season’ there has ever been!

“Back in March we were raring to go with our new Hyundai BTCC cars, 8 JCW Drivers and 4 Cooper Drivers in the MINI CHALLENGE, when we had high hopes of some stellar results and looked forward to jumping up towards the pointy end of the BTCC grid, but something got in the way.”

The season, which had been delayed due to the global pandemic, will still be aired Live and in full on ITV4 this year, with all-day coverage promising a golden opportunity for the Hyundai’s to shine over the three-race weekends.

“So now we are about to start again and if anything, our excitement and confidence has grown, especially since our recent BTCC tests. We just can’t wait to get to Donington to repay the loyalty of our team partners: Draper Tools, Evolution, Third Millennium, Rocket, Xite, Cranswick, Titanic Distilleries, Credo Asset Finance, Forge, Driven and Scorpion with some great results and maybe even some silverware!”

Despite the condensed season, fans will still get to enjoy the EXCELR8 team at all ten rounds from eight of Britain’s top racing circuits.