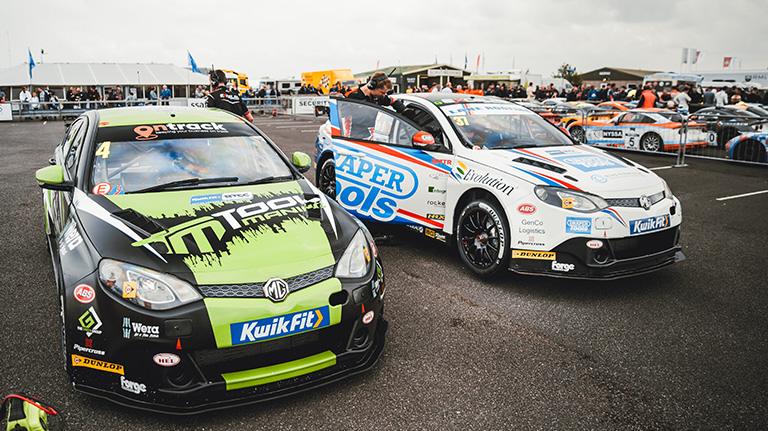 EXCELR8 Motorsport faced an uphill battle during its first British Touring Car Championship round at Thruxton last weekend, but came away with a whole heap of extra knowledge ahead of the return to the track in August.

With Rockingham dropping off the calendar for this year, it was decided that the BTCC would visit the super-fast Thruxton circuit twice this season to compensate. It meant that the mission for both Rob Smith and Sam Osborne during this first visit to Hampshire was to simply learn and keep things clean.

The high-speed changes of direction that characterise Thruxton demand a stable car that can ride the bumps well and give its drivers confidence. Due to the specialist nature of the track, the team knew that Thruxton, more than anywhere else this year, would highlight its lack of experience with the MGs.

Regardless, both Smith and Osborne threw themselves into the weekend and set about finding a balance with the two MG6 GTs. Osborne’s morning was disrupted by a gearbox oil leak, which cost him some time during first practice, but aside from that the morning was dedicated to setup work in the dry.

Qualifying showed the task the team had ahead of it. With Smith setting the 26th fastest time and Osborne going 28th quickest. A top-20 finish would be hard work, but was certainly achievable.

Hopes were still high for Sunday’s races as, in the BTCC, anything can happen. But, knowing that forward progress would be tough, both Smith and Osborne got their eye in during race one.

Smith benefited from troubles for Bobby Thompson’s Volkswagen to move up to 25th but couldn’t find a way past Nicolas Hamilton’s Ford. Osborne revived his rivalry with Mark Blundell’s Audi, but just fell shy of it at the flag in 28th.

Race two brought more progress as Smith defended stoutly from both Thompson and Carl Boardley to hold 21st place after Hamilton, Ollie Jackson and Dan Rowbottom all hit trouble ahead. Smith was then promoted to 20th post-race when Tom Chilton’s Ford was penalised time for not serving a drive-through penalty for disobeying track limits. Osborne was 27th after just losing out in a tight battle with fellow BTCC rookie Michael Crees’s Volkswagen.

Race three was more disruptive, with two safety cars and a lucky escape for Smith capping a challenging weekend. Another top-20 was on the cards, aided by an early collision between Rob Collard’s Vauxhall and Adam Morgan’s Mercedes helping both MGs up the order, with Smith into 21st and Osborne running 26th.

However, Smith’s hopes of going better than race two were hit when he got a huge slide on through Goodwood corner and was smacked by the unsighted Carl Boardley. It was an instant retirement for Boardley, but Smith escaped the worst of it to continue to the flag in 23rd. Osborne was elevated to 21st, having kept his head and picked his way through the chaos.

The results leave Smith 13th in the Independent Drivers’ standings and fourth in the Jack Sears Trophy. Osborne is 20th and seventh in the respective standings.

Rob Smith said: “On the whole it’s been a positive weekend as we’ve found pretty much two seconds of lap time since the test here and my times from races one and two were pretty much matching what Rory Butcher was doing in the car last year. The whole weekend was a big test. We were making quite big changes to the car with each session, some which worked and some which didn’t, just trying to get more comfortable with the car in high-speed corners. I was catching the huge slide in race three, then got a little help from Boardley. But after that it felt like the wheels were pointing in different directions, so it was a case of stroking it home and picking up some Independents and Jack Sears points.”

Sam Osborne said: “The weekend was OK, and we were just improving the car as we go. At the start we lacked confidence in the high-speed stuff and a bit of turn-in at the low-speed stuff, but the car moved forward with each race. We’re gradually learning more and more and finding these extra little things. Track time is so important to me right now. The more laps we can get in the car the better we’ll be. The main thing is we’re progressing and moving in the right direction. We started the weekend off on the back foot with setup and the oil leak, but we recovered it well. Now, on to Croft!”

EXCELR8 team manager Oliver Shepherd added: “Thruxton was always going to be a difficult weekend as it’s not the sort of circuit you can learn in a day. Having a car that’s comfortable in the high speed and responsive and precise enough through the slow speed is a tricky balance to strike, plus it takes a long time to understand how the tyres react with the load around the lap. But overall, we saw the same general trend from both drivers, that they progressed and got quicker and more competitive with every race. This weekend was hard, and we have to remember that this is a learning year. But Croft should be a less specialist circuit, so we can go there with high hopes.”

The next round of the BTCC takes place at Croft Circuit in North Yorkshire on June 15/16.