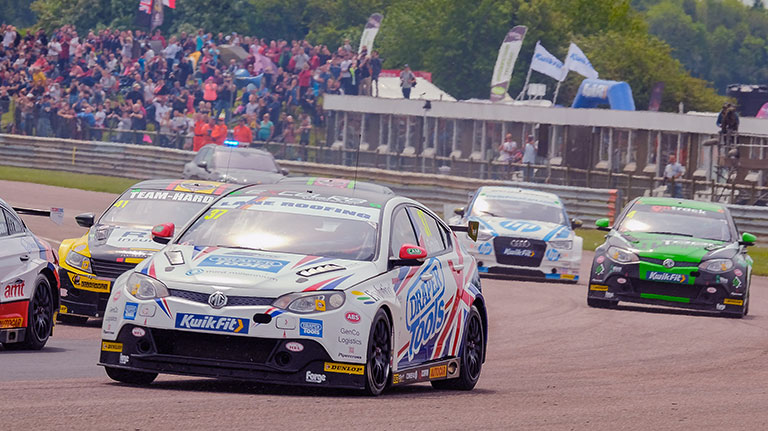 EXCELR8 Motorsport returns to the high-speed Thruxton Circuit this weekend keen to build on its strongest result in the British Touring Car Championship so far.

Sam Osborne secured the first points of EXCELR8’s new BTCC venture when he was classified 14th in the third outing during the last round at Snetterton. Rob Smith also showed impressive pace, especially on the softest tyre compound, despite battling the setup, which didn’t quite tick all the boxes.

The results proved a timely boost for the squad, which has continuously chipped away at the lap-time deficit to the established front runners during its first season in the BTCC with the twin MG6 GTs, and both drivers have made notable progress across the last few events.

Next up is round seven at Thruxton, which represents the team’s first familiar territory in BTCC terms, with the pack having also competed there back in May for the third round of the campaign.

The second visit to the Hampshire speed bowl means both the drivers and the EXCELR8 team head into the weekend knowing roughly what to expect, and with solid experience of how to set up the cars to best cope with the fast, flowing speeds of the airfield circuit.

Sam Osborne says: “In truth, I’m still buzzing from the Snetterton result. It took a while to sink in and it barely feels like two minutes since we had that round, now two weeks later we’re right back into it at Thruxton. I’ve got a taste for points now, so they have to be the aim again this weekend, and my confidence is really high. The car felt amazing on the soft tyre in the last race at Snetterton – it really came to life. So, our task will be to get that feeling on the harder Dunlops that we’ll be running at Thruxton. If we can do that, then I’m sure we’ll be in the mix.”

Rob Smith says: “I wasn’t happy after Snetterton. I felt it was a missed chance in many respects. But I went away and had a deep debrief with the team and we think we’ve identified that it was the setup direction we followed that caused many of the balance issues I had. In race three we went in a different direction and found an improved feel, so with that fixed it also opens the opportunity for us to do more with the basic setup and hopefully unlock another good step in performance. Thruxton is such a specialised track. It’s incredibly fast and you really need a stable, reliable car with a solid rear end that you know you can trust, especially around the fastest corners at the back of the circuit. I’m looking forward to getting back on track and showing everybody just how much we’ve improved since we first raced there.”

EXCELR8 team manager Marvin Humphries adds: “We’d been edging towards a point or two over the last few rounds, so to achieve that milestone at Snetterton was brilliant for the team. Everyone is working well in the team and that result was a real lift. We’ll approach Thruxton just like we did Snetterton, where we had a few days of good testing beforehand and went into the Saturday fully ready to run and up to speed. We’ve raced at Thruxton already this year, so we have the data and the boys know the circuit, plus the setup we had on the cars back at that first weekend wasn’t too bad. But it will be interesting to see how far we’ve come on in terms of experience. We’re really looking to going for it this weekend.”

Qualifying for the BTCC’s second round at Thruxton this year is set for 1525hrs on Saturday, August 17. Race one is scheduled for 1215 on Sunday, followed by race two at 1435 and the finale at 1725. All races will be shown live via ITV4, and live timing will be available via the TSL website.