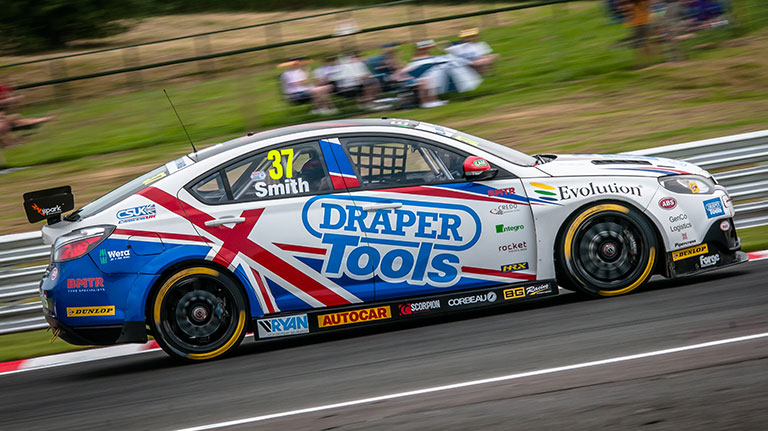 EXCELR8 Motorsport is gearing up for its home round of the British Touring Car Championship at Snetterton this weekend, and is keen to begin the second half of the campaign with a strong showing on its local circuit.

Based just a handful of miles from the Norfolk track, Snetterton is the venue EXCELR8 knows the best of anywhere on the calendar, and should therefore be the perfect place to resume this year’s competition after the summer break.

The downtime in the calendar gave the team and its drivers – Rob Smith and Sam Osborne – time to recover from a difficult last outing at Oulton Park. The three races this weekend come off the back of the recent two-day Dunlop tyre test at the same venue, during which Smith and Osborne managed to rack up over 800 miles of combined running in the pair of MG6 GTs.

The test also went some way to showing the team’s progress since the start of the season, with the lap times of the twin MGs comparing well to those of the front-running teams. It is estimated that EXCELR8 has halved the performance gap per mile to the top teams since the start of the season, putting the team in good shape to continue that sort of forward progress at Snetterton this weekend.

Rob Smith says: “I’m feeling good ahead of Snetterton, and the test really helped us. It would have been nicer to have a week’s testing, but we still found a good direction from the two days. We went back to basics and actually unlocked something really positive in terms of the feel of the car. Right now, I’d say I’m about 80 per cent there with the driving style needed for the BTCC, and there’s still some positive changes to be made to the cars. Plus some understanding of how to get the most from new tyres, which change the balance quite a bit for me. This weekend we’ll continue working on setup on Saturday and see what Sunday brings. It would be great to get our first points on the board on the team’s home turf.”

Sam Osborne says: “The Snetterton test was really useful. We basically turned the entire car upside down and inside out to find a better balance after the struggles we had at Oulton Park, and I definitely think we found something positive from all the work. I think we’ve got a good base now to improve upon. We’ve struggled a lot with understeer this season, so we wanted to make the cars more lively without making them feel too edgy. But mostly it was just good to get out and drive as seat time is so important in a series like the BTCC. For the race weekend, I think we can be very competitive. We showed great pace toward the end of the test and, as long as we can keep carrying that forward, then we can have a strong weekend. We have to start knocking on the door of points finishes, and that’s the aim.”

EXCELR8 Team Manager Oliver Shepherd adds: “We go into every weekend just looking to progress from where we start. The test at Snetterton gave us some really good information to work on, so now the goal is to convert what we learned there into progress over the race weekend for both cars. The Snetterton layout has a bit of everything, so it’s a great test in terms of setup. Obviously we want to put on a show and have a strong weekend on home ground, but right now the biggest thing for us is to continue chipping away at the gap to the frontrunners to ensure we’re right in the fight before the end of the season.”

Qualifying for the BTCC at Snetterton is scheduled for 1500hrs on Saturday, August 3. Sunday’s first race is due to get underway at 1135hrs, with all three outings shown live via ITV4. Live timing is available via tsl-timing.com.