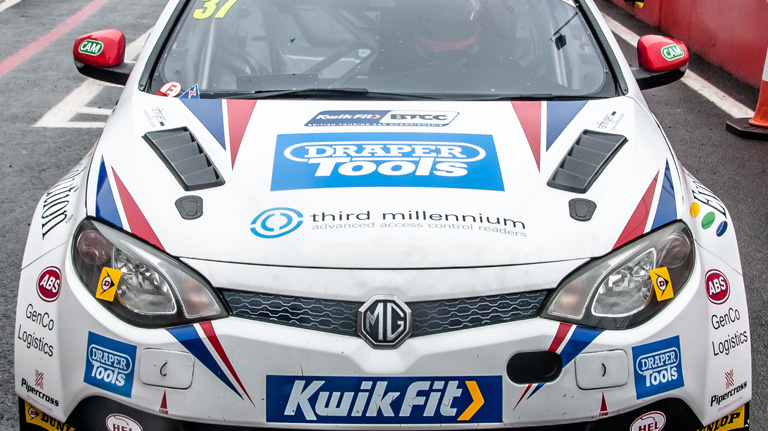 EXCELR8 Motorsport’s plans for its second season in the British Touring Car Championship are going from strength to strength after confirmation that the team will extend its partnership with leading security technologies business, Third Millennium, into the 2020 campaign.

EXCELR8’s impressive learning year in the top level of British motorsport has caught the attention of fans and drivers up and down the sport, as it continues to increase the performance of its twin MG6 GTs, raced by Rob Smith and Sam Osborne. The hard work done so far has already begun to pay off, with the team scoring its first championship points earlier this season at its home circuit of Snetterton.

That sort of progress can only be made possible by the unwavering support from a superb group of business partners, and Third Millennium is a key part of that, with its logos currently adorning the bonnet of Rob Smith’s MG6. The news that the firm will continue to be a part of EXCELR8’s plans for next year can only be a positive for the BTCC’s newest team.

Third Millennium is a leading independent security technology company, specialising in the design, development and production of advanced access control readers from its base in Pontypool, South Wales. Its 20 years in the industry ensures its products protect the security of hundreds of businesses across the globe.

EXCELR8 Team Owner Justina Williams said: “We’re absolutely delighted to confirm that our partnership with Third Millennium will extend into the 2020 season, and we cannot wait to join forces again for next year. Our first season in the BTCC has been a real learning curve so far, but the team has grown fantastically since our first race, and to have key partners confirmed so early ahead of next year can only help us to continue our upwards performance curve.”

Peter Jones, Third Millennium Managing Director added: “Third Millennium is a small, focused and successful technology company striving to achieve great things against powerful, global competitors from within our own resources. Over the last season, I have come to admire these same traits in the EXCELR8 Motorsport team as they take on their first season in BTCC. It gives me great pleasure to announce our continuing support for the team into 2020.”

For more information about Third Millennium and its range of security enhancing products please visit tm-readers.com.

EXCELR8’s BTCC season continues with the annual visit to Knockhill in Scotland over the weekend of September 14/15.