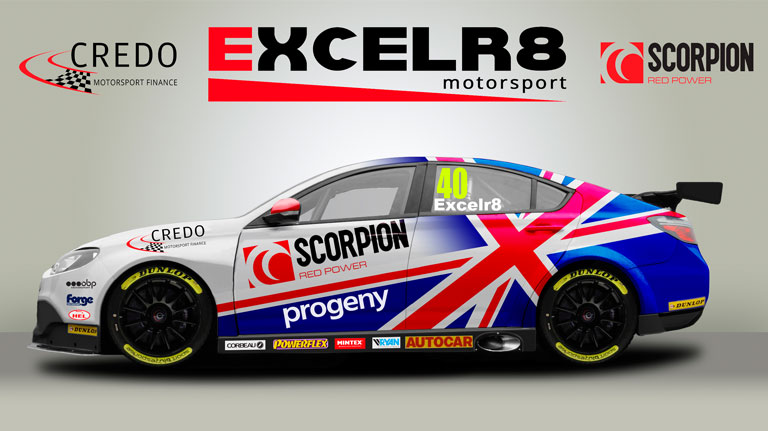 EXCELR8 Motorsport will become the newest team to join the British Touring Car Championship next season after securing a deal to take over the running of a pair of MG6 GT machines.

The Norfolk-based squad has purchased the MGs from the AmDTuning.com team, together with the TOCA BTCC Licences (TBLs) required to run them in the full 2019 Championship. One driver is confirmed for the new programme, while the team is assessing candidates for its second seat and welcomes further enquiries.

The deal marks a new venture for EXCELR8 Motorsport, which has been a leading power within the MINI CHALLENGE during recent years. As well as constructing over 75 of the high-powered CHALLENGE JCW race cars for both the UK and overseas markets, EXCELR8 also fields multiple drivers across the three classes of the Championship.

Team Manager Oliver Shepherd says the deal to expand into the pinnacle of British saloon car racing is an exciting opportunity for the team. “We’ve been looking towards the BTCC for a few years now and when we got the chance to get hold of the MG GTs it was an opportunity that we couldn’t pass up, especially as it fits with our ‘Great British’ theme.

“The BTCC is the highest-profile Championship in the country, with some incredible drivers and very high-calibre teams, so we know we will have our work cut out to learn about the racing and the new cars. However, we have no doubt that we can compete at this level, and we’re currently working hard to finalise an exciting driver line up for 2019.

“This is a sizeable investment for EXCELR8, and we’re acquiring all-new specialist equipment to make sure we have everything we need to hit the ground running next season and deliver the professionalism and presentation that we are known for in the MINI CHALLENGE”

The deal marks the start of a multi-year touring car programme for EXCELR8, which will use the MGs to learn the Next Generation Touring Car (NGTC) platform, while also assessing potential opportunities with other suitable automotive brands for the future, with a focus on British marques.

BTCC Series Director Alan Gow added: “It’s always great to see new teams joining the BTCC, and EXCELR8 has certainly proven its capabilities and professionalism in the MINI CHALLENGE – a series which has already produced many current or recent BTCC drivers.

“Keeping the MG GTs on the grid is great news and ensures the BTCC retains a good diversity of manufacturers. I look forward to seeing how quickly EXCELR8 and its new drivers can acclimatise to the BTCC and wish the team the best of luck ahead of next year.”