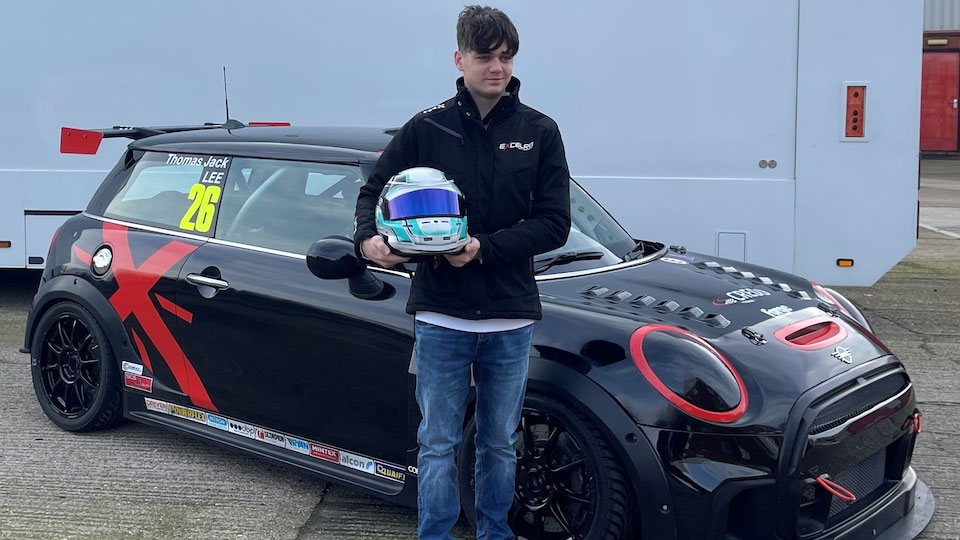 EXCELR8 Motorsport can today confirm that talented teenage racer Thomas Jack Lee will graduate into the Quaife MINI CHALLENGE with the team for the 2023 season.

The 15-year-old from Otley in Suffolk – less than half an hour from EXCELR8’s Brome base – will become one of the youngest drivers on the grid when he makes the move into the headline JCW class on the back of a fine campaign last year in the BRSCC Fiesta Junior Championship.

In what was his first full season of car racing, Thomas Jack marked himself out as one to watch from the first qualifying session of the campaign as he missed out on a front-row slot by just 0.009s before battling his way to a maiden win in the second race of the weekend on the Brands Hatch Indy circuit.

Although he would then suffer an unfortunate disqualification at Croft during the second meeting of the year, Thomas Jack bounced back in fine style with a victory at Oulton Park before a stunning weekend on home soil at Snetterton saw him take three wins from three.

Another hat-trick at Knockhill – despite a five-second penalty in the final race – as well as a victory during the season finale back at Brands Hatch resulted in an impressive nine wins from 17 starts, with the youngster finishing on the podium 14 times in total.

That was enough to see Thomas Jack take top rookie honours, whilst he only missed out on the overall crown by 16 points following a titanic, season-long fight with main rival Sid Smith.

Keen to now progress to senior-level competition on the back of his success last season – and having already had a taste for the BTCC support package from a two-round outing in the 2021 Ginetta Junior Championship – Thomas Jack will join forces with EXCELR8 as part of the team’s multi-car assault on the MINI CHALLENGE’s headline JCW class.

The decision to step directly into JCWs will provide Thomas Jack with the chance to showcase his talent at a higher level, whilst partnering with EXCELR8 will provide a wealth of experience from working alongside the most successful team in the series.

With a desire to potentially race in either sportscars or the BTCC further down the line, joining forces with EXCELR8 will also give Thomas Jack the opportunity to develop a long-term relationship with the team – which also runs programmes in the Porsche Carrera Cup GB and the BTCC, where it took the title last year with Tom Ingram.

The new MINI CHALLENGE JCW campaign will kick off at Donington Park in late April.

“It’s hugely exciting for me to be moving into the MINI CHALLENGE JCW series for 2023. Running alongside the BTCC means the opportunity for me to compete on the biggest package in UK motorsport as part of a big grid, and with EXCELR8, I feel I have the best team behind me to take on the challenge. It has shown what it can do across a number of championships in recent years, and is a team I could see myself working with on a longer-term basis as I look to further my career.

“When I had the chance to test the car, I was open-minded about what to expect as I knew it would be a lot different to the Fiesta, and working alongside EXCELR8 regular Ronan Pearson really helped me to get up to speed. I was able to make use of his experience to settle in quickly and I was happy with the pace I displayed, which I feel gives me a good platform to now build on.

“The higher speeds, longer races and the fact that the JCW is more on edge compared to what I have raced before means there will be a lot of new challenges ahead, but I feel ready for it. Being precise and avoiding mistakes is going to be key, and I really want to show what I can do on a bigger stage.

“As one of the youngest drivers on the grid, the goal has to be to learn as much as I can from the team and work hard to improve as the season goes on. Hopefully I can soon be in a position to challenge for rookie podiums, and work my way up the overall order.”

“It was a pleasure to sit alongside Thomas Jack on his first day in the JCW car. It’s an incredibly difficult car to get to grips with straight away, but he showed within a few sessions that he has the ability to put on a good showing during the year ahead.

“I’m looking forward to having him as a team-mate, and am interested to see him develop over the course of the season.”

“We’re hugely excited to welcome Thomas Jack into the team as, despite his limited experience, he has shown himself to be a driver with a huge amount of potential. To secure the results he did last year in his rookie season in cars was hugely impressive, as was his performance when he got behind the wheel of the JCW last year.

“He took onboard all the advice that Ronan and the team provided, and that was reflected in the amount of progress he made in a very short amount of time. Although it’s important for him to keep his feet on the ground going into the new season, we’re confident that he can show what he is capable of over the course of 2023.”