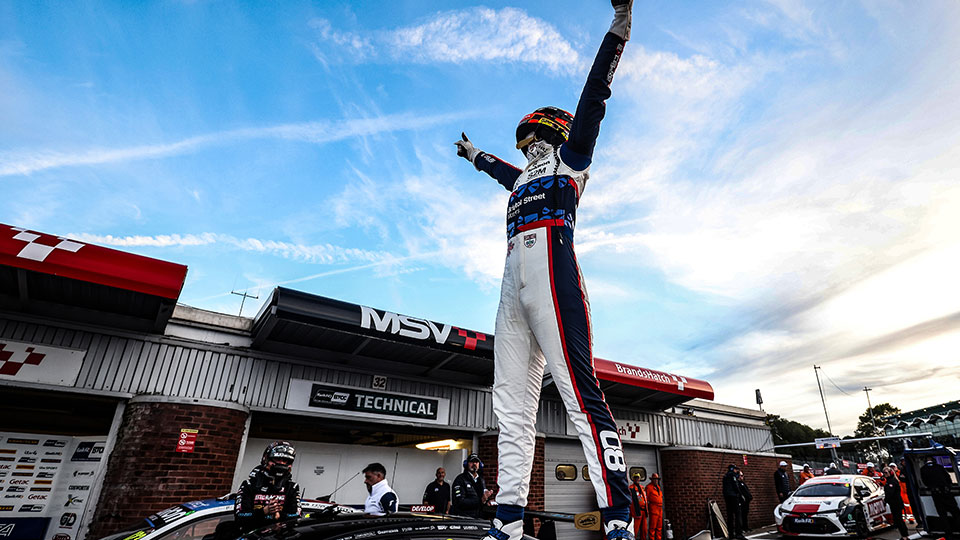 In only its fourth season competing in Britain’s premier racing series, the Suffolk-based squad secured the prestigious championship title thanks to Tom Ingram, who saw off the challenge of Ash Sutton, Jake Hill and Colin Turkington in the Brands Hatch finale to lift the crown for the first time.

Tom’s title success saw him nominated as one of ten contenders for the ‘National Racing Driver of the Year’ award, which would be decided through a public vote.

“It is certainly a cool achievement to win the 2022 Motorsport News Driver of the Year,” he said. “When the public can get involved and vote for their favourites, it is a nice thing to have your name put forward in the first place, but it is even nicer to win the award.

“It is a wonderful humbling experience to be voted for and thanks to everyone who did click online for me. It is a nice extra thing to round off this season’s success.”

EXCELR8 was given extra reason to cheer when a panel of six experts then selected the Hyundai squad as team of the year ahead of a similarly strong list of opponents that included RAM Racing, Hitech Grand Prix and Fortec Motorsport.

The award was reward for a successful campaign that was all the more impressive given that the team was running a new engine for the first time – having developed a bespoke Hyundai unit alongside Swindon Powertrain – and was also dealing with the introduction of the BTCC’s new hybrid technology.

In total, the team secured nine race wins – six for Tom and a further three for Daniel Lloyd – amongst a total of 14 podium finishes, and would lead more laps than any other team on the grid.

“The team all did a cracking job and the outstanding thing about them is that they each care so deeply about what they are doing,” Team Owner Justina Williams said. “It’s okay to do a job, but it is another thing to really care about the role they perform and that all had a passion for it.

“That has been proven on the days when things haven’t gone our way and they all had to roll their sleeves up and get stuck in until the early hours of the morning to get things done.

“We want to win the BTCC title again, and then again, and again after that. We do enjoy the winning feeling. There are so many lows in motorsport that when you do get these highs, they are absolutely incredible.”