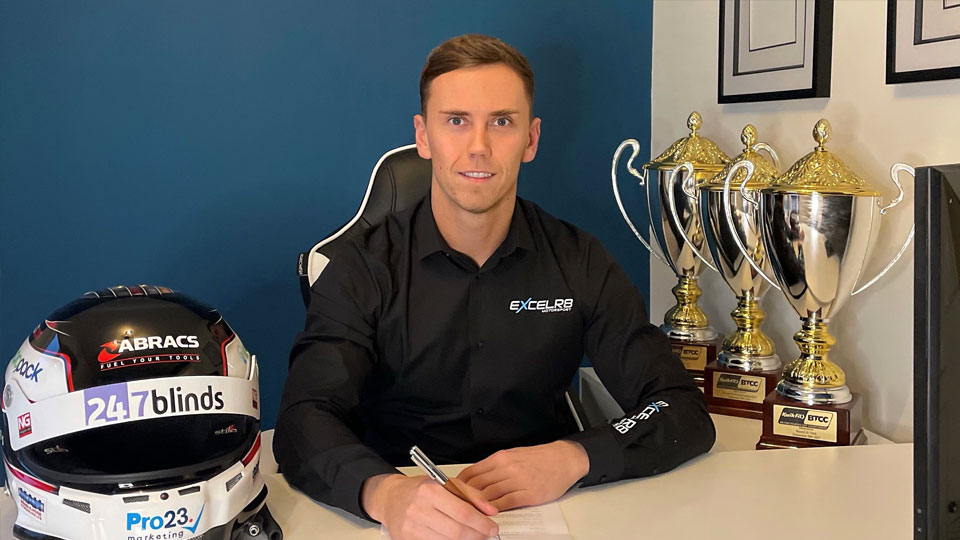 Kwik Fit British Touring Car Championship race winner Daniel Lloyd will return to the grid for a second successive season in 2022 after penning a deal with front-running outfit EXCELR8 Motorsport.

With the series about to embark on its ground-breaking new hybrid era, the signing signals Lloyd’s most serious BTCC challenge to date as the Huddersfield-based racer teams up with title contender – and two-time Independents’ Champion – Tom Ingram in one of EXCELR8’s Hyundai i30 Fastback N machines.

No stranger to the BTCC paddock, Lloyd celebrated four podium visits in the final three rounds of the 2021 season, turning around a tricky start to the year to demonstrate the benefits of experiencing a full campaign.

Following an intensive pre-season testing programme for Lloyd and the EXCELR8 Motorsport squad in the coming weeks, the 2022 Kwik Fit British Touring Car Championship season will get underway at Donington Park on 23-24 April.

Daniel Lloyd #123 Hyundai i30 Fastback N said:
“I’m very excited to announce that I’m joining EXCELR8 for the 2022 season. Although I’ve been involved in the BTCC for a number of years, last year was my first opportunity to really show my full potential across the season.

“It was probably one of my most successful seasons in motorsport, both on and off the track, and I managed to get some great race results as well as grow my network of partners, which is so important in the BTCC.

“My main goal this year is to become a more consistent front-runner and I feel that EXCELR8 has the full package to help me to achieve this. I’m hoping to learn as much as I can from the team and as quickly as possible transfer that into results on the track. It’s going to be great to have Tom [Ingram] as a team-mate and to be able to lean on his experience whilst getting used to the new car.

“I couldn’t have achieved this without the support of my sponsors 247blinds and ABRACS. These guys are both going to be giving the BTCC fans a chance to win some amazing prizes this season, which we plan to announce soon. My member’s club also continues to grow as well as new partners which I’ll look forward to announcing soon. The black-tie ball event and Silverstone track day were both a huge success and we’re going to go bigger and better this year. We’re still looking for new members and partners to join, but the fact that we’ve secured this seat with EXCELR8 early puts us in a great position.

“I’d like to take the chance to thank the Power Maxed Racing team and all the team fans for their support last season. There are many factors in the background that made me take this decision to switch, but I wish them all the best for the up and coming season.”

Justina Williams, EXCELR8 Team Owner said:
“Although we enjoyed a hugely successful season in 2021, in a series as competitive as the BTCC, you can’t afford to stand still and have to constantly look for ways to improve. Bringing Dan into the team alongside Tom as we prepare for the start of the new hybrid era adds further strength to our driver line-up, and we’re confident that he will be able to help us work towards our goals for the year ahead.

“Dan is clearly a quick driver as his results in both the BTCC and elsewhere have shown, but he also has a strong understanding into what is required in a commercial sense from a racing programme. We look forward to working with him to make a success of 2022 both on, and off, the track.”