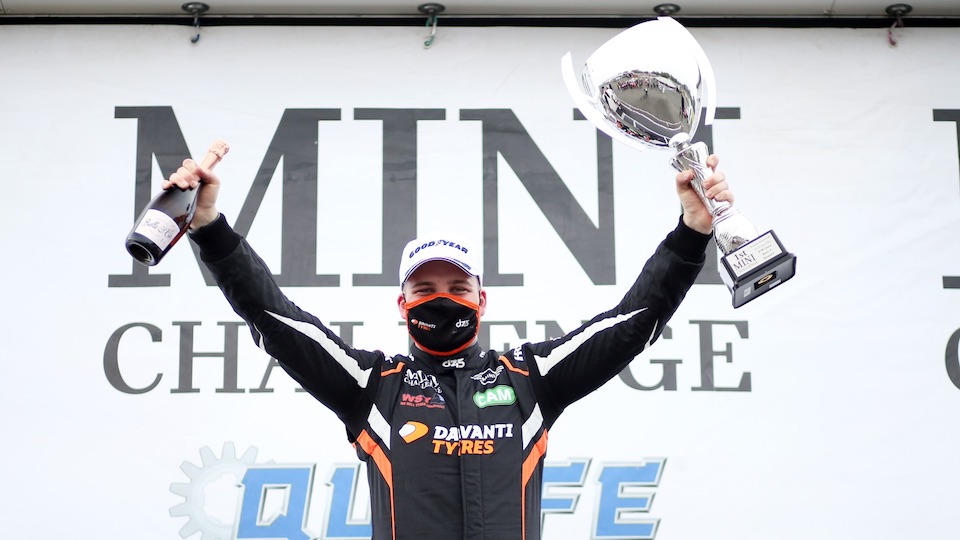 Dan Zelos returned to the top step of the Quaife MINI CHALLENGE podium in fine style with victory in the final race of the weekend at Brands Hatch.

From second on the reverse grid, it had been Sam Weller who led away when the lights went out having jumped Jason Lockwood, with Liam Lambert trying to split the pair going into turn one.

There, Weller’s hopes of a first win of the year disappeared as he suffered a sideways moment that allowed Lockwood through into the lead, and having slipped back into the pack behind, Weller then ran off track at Graham Hill Bend before returning to the pits – eventually rejoining the action three laps down and with any hope of a strong result having gone.

That left Lockwood leading at the front from a fast-starting Zelos, who had jumped up to fourth on the run to Paddock Hill Bend, with James MacIntyre, Issac Smith and Lambert rounding out the top six.

Zelos moved into the lead on the third lap when he got a run on Lockwood through Paddock Hill Bend and was able to slip up the inside into Druids, with Smith giving chase after he managed to battle ahead of MacIntyre into third.

Smith got a run on Lockwood going into Surtees on lap four and tried to go around the outside, but slight contact between the pair was enough to tip the two cars into a spin, with Smith rejoining back in ninth but Lockwood slipping out of the top ten before he was forced to pit to allow his car to be checked over.

After a caution period to recover Neil Trotter’s LDR-run car form the gravel at Paddock Hill, the action resumed with Zelos quickly breaking away from MacIntyre and Lambert, with Kenan Dole and Jack Davidson then squabbling over fourth spot; Davidson edging ahead on the first lap after the race restarted.

Race two winner Max Coates was running just behind, with Lewis Brown and Ronan Pearson also ready to strike in case something happened ahead.

Dole tried to go round the outside at Druids on lap 14 but couldn’t make a move stick as he then lost out to Davidson, with Coates almost able to draw alongside Dole on the run to Surtees before realising there wasn’t room to sneak ahead.

A recovering Smith had closed onto the rear of the train and dispatched with Pearson on lap 15 at Druids to move back into eighth.

Zelos continued to extend his lead heading into the final five minutes of the race from MacIntyre and Lambert but the latter was under pressure from Davidson, who managed to sneak through at Druids on lap 17 into the podium places – with Dole quickly following him through.

By now however the top two were clear up the road, with Zelos controlling things from the front as he secured his first victory of the campaign – giving him a first win since 2019.

“I haven’t won in over a year and I needed to tick this box off,” he said. “I’m glad to do it early in the season and hope we can now add to this. EXCELR8 gave me a great car and we’ve had a good weekend but there is still a long way to go.”

MacIntyre enjoyed his best result in the series as he earned a place on the podium for the first time on the road, having inherited third in race two, with Davidson taking third to complete a remarkable recovery from being excluded from qualifying.

Lambert followed him home after a drag race to the line with Coates, which came after Dole and Smith both lost out late on whilst trying to make up places in the final two laps. Dole dropped back to ninth place at the finish with Smith down in 17th having run off track through the final corner on the final lap.

Behind Coates in sixth was Brown, with Pearson in a solid seventh. Max Bird capped a remarkable recovery drive from his race two DNF to take eighth and maintain the points lead, with Dole and Robbie Dalgleish then rounding out the top ten.