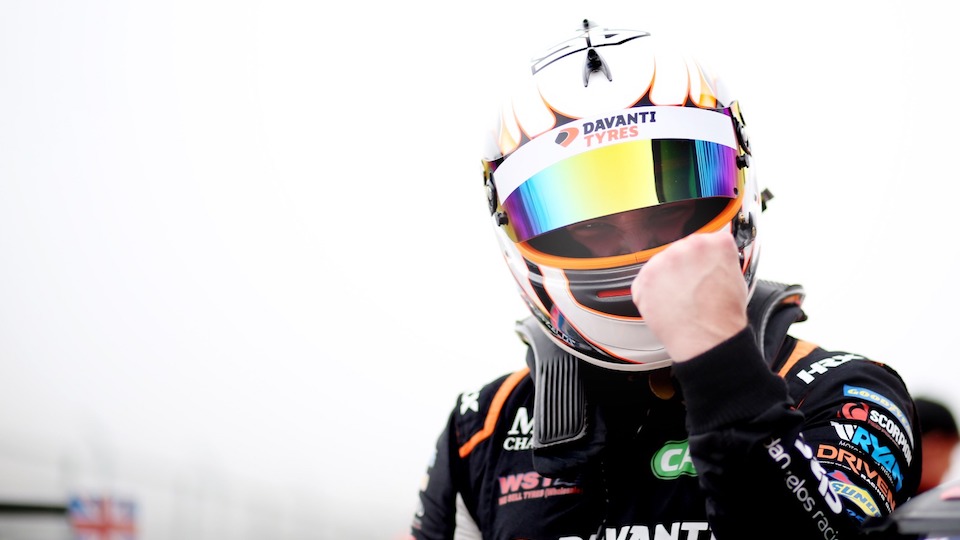 Dan Zelos continued a perfect weekend at Knockhill as he made it two wins from two with another victory in the Quaife MINI CHALLENGE.

The EXCELR8 driver had qualified on pole on Saturday before taking a lights-to-flag win in race one, which left him to start from the front of the grid for race two.

When the lights went out at the start, Zelos made the best start to lead the field into turn one, with Joe Tanner getting the jump on Jason Lockwood to move into second.

Behind however, a fast-starting Kyle Reid tried to go between Stephen James and Ryan Faulconbridge on the run towards turn one, but three into one didn’t go as Reid was squeezed between the pair, who then came together before spinning off into the tyres on the start/finish straight.

Going through turn one, Ru Clark then got out of shape going down Duffus Dip and suffered a spin before coming back onto the track and tagging the car of Neil Trotter, which would spin off into the gravel at McIntyres, with James Griffith also sliding off at the same place.

The red flag was thrown to allow the cars to be recovered, with Faulconbridge and James both unable to take the restart, with the race being reduced to 15 minutes in length.

Zelos once again got the best start when the lights went out for a second time as Lockwood bogged down alongside him on the front row, which allowed Tanner, Jack Davidson and Max Bird to jump ahead as the field streamed down to turn one.

This time, the field was able to make it through the opening corners unscathed but things would go awry on lap two with Lewis Brown and James MacIntyre got on the grass going through Leslies and slid off into the gravel at McIntyres – somehow avoiding the car of Ronan Pearson as they passed either side of the LDR Performance Tuning racer.

The race went back behind the safety car as Brown and MacIntyre were recovered from the gravel with the action restarting on lap six with little under seven minutes of time left on the clock.

Zelos nailed the restart to keep the lead with Davidson giving chase, with Tanner dropping away from the lead pair as he came under pressure from Bird for fourth; the EXCELR8 man aware of the need to try and minimise his points loss to Zelos at the front.

Bird however also had to be aware of Lockwood behind, with the pair almost side-by-side going into the hairpin at the end of lap eight, but managed to make his move on Tanner as the start of lap ten to go third, with Lockwood also passing the BTC Racing man with a similar move a lap later.

Zelos set the fastest lap to edge away from Davidson, Bird and Lockwood, but Tanner dropped away from the leading group when he ran wide out of the Chicane on lap 13 and dropped back down to ninth.

As the clock ticked down to zero, Zelos took the flag to make it two wins from two to maintain his perfect weekend, with a second victory of the weekend allowing him to extend his advantage at the head of the championship standings.

“It’s been another perfect race and the car was on rails again – even with it being as cold as it is this morning,” he said.

“In the last few years, we’ve started the season later and have run in warmer conditions and I think this is the coldest it has been for a while so getting heat in the tyres was a real challenge.

“Now I just need to stay out of trouble in race three.”

Zelos will start that final race from seventh on the grid after pulling seven on the reverse grid draw.

Having taken the flag in fourth spot in race one, Davidson was able to celebrate a second podium finish of the season as he chased Zelos home for his best result of the campaign – a result made all the more special given it came at the home venue for both driver and team.

“We put new fronts on today and the car was great,” he said. “Huge thanks to LUX Motorsport for setting the car up as it was mega. I tried my best to keep up with Dan but I made a few mistakes and dipped a wheel off so I just need to iron those errors out for race three.”

Bird would close in on Davidson through the final laps but wasn’t able to get close enough to make a move for second spot, although third allowed him to minimise his losses to Zelos in the title race.

“I wasn’t really thinking about the points, I just wanted to do as well as I could,” he said. “Obviously the points are important and I made a good few moves on Jason and then on Joe at turn one to get the places.

“It was a tricky race because of how cold it was, and after the safety car it was like a rallycross track in places because of all the gravel on the circuit, so it was good to just get through that unscathed.”

Lockwood was left to wonder what might have been had he got away off the line, with strong pace as the race wore on leaving him to cross the line in fourth spot as top Graduate runner with Sam Weller taking fifth having been the main beneficiary of Tanner’s mistake.

Ethan Hammerton enjoyed one of his best races of the season to take sixth spot having battled ahead of Max Coates, with Isaac Smith taking eighth ahead of Tanner. Pearson then rounded out the top ten ahead of Brad Hutchison, Clark, Hannah Chapman, Reid and Kenan Dole.

MacIntyre and Brown would both continue in the race after their early incident but would end up three and four laps down respectively, with Callum Newsham and Mark Dickson the two drivers who joined James and Faulconbridge in retirement.

Dickson’s participation in the race came after LUX Motorsport worked to repair his damaged car overnight but a late night for BTC Racing repairing Lydia Walmsley’s car came to nothing when engine troubles ruled her out of Sunday’s action.