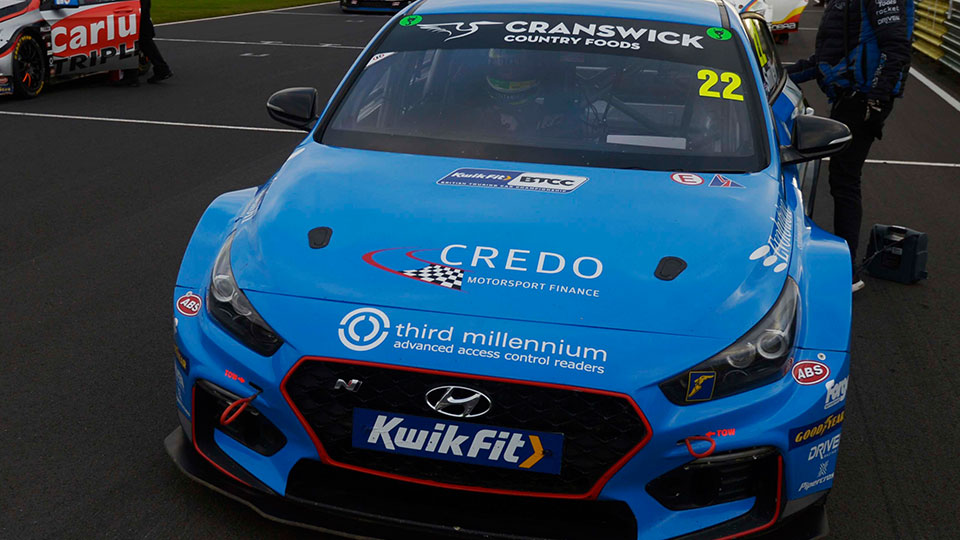 With just two rounds to go in the British Touring Car Championship, the pressure could not be more intense as we prepare for the end of season rush at the series penultimate round.

Based in Norwich, Credo Asset Finance, like EXCELR8 Motorsport will be determined to show off their golden side at their local Snetterton circuit and to celebrate have partnered up with the BTCC team to offer a Draper Tools Track Pack prize to a lucky winner.

Offering over £800 worth of equipment the prize will include a Low Entry 2.25 Tone Trolley Jack, XP20 Brushless 1/2″ Impact Wrench and 149 Piece Socket & Bit Set, this is not to be missed. Simply head to the BTCC Facebook or Twitter posts to find out how to win this amazing prize.

Like EXCELR8, Credo is a local results-driven business that has been on the rise for over a decade of operation. Offering business and personal finance services, they are specialists in asset management from cars and vans to construction and agriculture.

Team Owner Justina Williams heads into the weekend confident, buoyed by the support Credo have shown them this year.

“It’s fantastic to be back to the venue that holds such a special place in our hearts. The teams first points last year was directly influenced by the support of Credo Asset Finance and Draper Tools and with them back for our sophomore year, I only expect greater results.

The prize is a fantastic opportunity for our fans and highlights the determination and commitment Credo have offered us throughout the last two years, remaining loyal throughout this extraordinary season, as one of our key supporters.”

Success has peppered EXCELR8’s year, with the team recording their first top ten in the opening race of the year, before picking up their maiden podium and pole position just after. This set the precedent for the journey ahead, with both drivers experiencing the rostrum during the year and will be determined to continue that legacy this weekend.

Snetterton itself was a special venue for the team in 2019, recorded their first ever points scoring finish in an entertaining third race.

Since then the new Hyundai i30 Fastback N Performance pair at the hands of Chris Smiley and Senna Proctor have been one of the most improved teams on the grid, fighting amongst the series most established front runners in their striking bright blue livery. Could EXCELR8 yet continue their proven track record at the 2.97-mile circuit.

Fans at home can follow the teams progress with Live Coverage courtesy of ITV4 on Sunday 25th October 2020.

The competition is promoted and organised by EXCELR8 Motorsport. Contact us via our website or social media channels.

The competition closes Monday 26th October at 4pm and the prize winner will be declared on our social media channels later that week.

How we picked the winner.

The process for finding a winner was as follows:

We used https://retweetdraw.com/ to get the random twitter user that had retweeted the tweet. This gave us https://twitter.com/claugirl77. We also checked that they followed Credo https://doesfollow.com/claugirl77/credofinance

For Facebook We copied the list of recently liked users into https://miniwebtool.com/random-picker/ and pulled out ‘Antony G Down’

We then ran both names through https://miniwebtool.com/random-picker/ and it delivered claugirl77 as the overall winner.