BTCC points are the prize for EXCELR8 at Snetterton 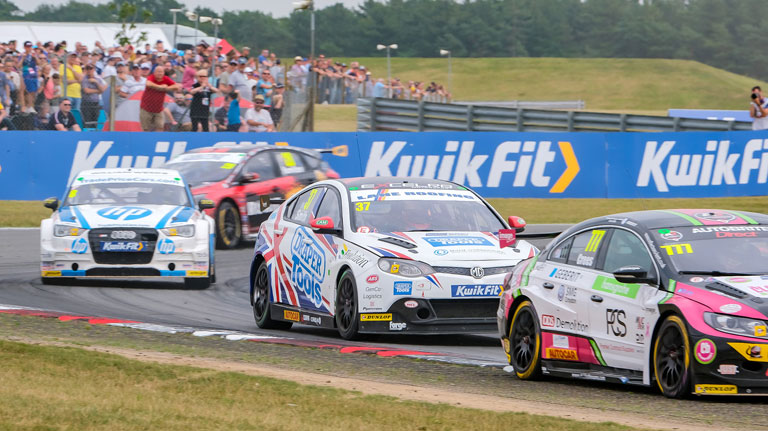 BTCC points are the prize for EXCELR8 at Snetterton

EXCELR8 Motorsport celebrated a milestone result during its home British Touring Car Championship event at Snetterton last weekend as the team notched its first championship points at the highest level of British racing.

When Sam Osborne crossed the line to finish within the top 15 in his MG6 GT in the third race of the weekend it sparked jubilant scenes within the EXCELR8 garage. The hard work across the last year had just paid off again as the team officially got off the mark in the UK’s toughest championship.

The race-three result was the high point of an otherwise difficult weekend for the team and its drivers, Osborne and Rob Smith. After two hard days of setup work during the annual Dunlop tyre test that preceded the event, the team was hopeful of making a step up the order. However, qualifying proved more difficult as both drivers struggled to find a comfortable balance around the three-mile track. Smith would start from 27th, with Osborne in 28th.

But Snetterton’s three races also brought an unknown variable, with teams having to use all three compounds of Dunlop tyre across the races – soft, medium and hard – with an estimated 1.5-second per lap differential between the softest and the hardest rubber. It added an extra dimension of race strategy that allowed EXCELR8 to play the long game with tyre strategy.

Race one proved a battle. Preferring to keep the faster tyres in reserve, both Smith and Osborne started the opener on the hard Dunlops, and both cars made some strong early progress as chaos broke out ahead of them. Both cars had trouble getting the hard tyres into the right operating window with their respective setups. Smith fell behind Osborne, with the MGs taking the flag in 24th and 26th places respectively.

Smith took the softer tyres for race two, planning a charge up the order, but never got the chance to show what he could do with the quicker compound after he was forced to brake hard to avoid a sideways Matt Neal on the first lap, killing his momentum. Smith was then caught up in a tight battle with Michael Crees’ Volkswagen, which ended with a side-by-side collision at the Wilson hairpin that resulted in a tour back to the pits for the MG with broken rear suspension.

Osborne – on the medium tyre – managed to escape the worst of the first-lap chaos and got stuck into a great fight with Mark Blundell’s Audi and Nicolas Hamilton’s Ford. The three exchanged places regularly, but Osborne eventually lost out when he was pincered between the two into Hamilton and spun on the corner exit. That restricted him to 24th.

However, race three was where it would all come together. Osborne had saved the fastest soft tyres until the end, while Smith took the mediums, which would still be quicker than many of the hard-shod cars around him. Sadly, Smith was once again delayed on the first lap by a spinning Stephen Jelley at the hairpin, costing him vital ground on the opening tour again through no fault of his own.

Osborne again escaped the chaos, and took the fight to the cars ahead, chasing down race-winners like Dan Cammish (Honda), Adam Morgan (Mercedes) and Senna Proctor (Subaru), getting himself well into the fight for the final points-paying places from early on.

With the faster tyres, and a heap of determination when given a sniff of the team’s best result yet, Osborne pressed on, piling the pressure on those ahead. He eventually found a way by Cammish’s factory Honda Civic to slot into 15th and take the last championship point at the flag. Cue celebrations on the pit wall. Things then got even better post-race, when Osborne was elevated to 14th when Jason Plato picked up a post-race time penalty for driving standards. It’s also important not to miss the fact that Smith recovered from his tough start to battle home in 19th, putting both MGs within the top 20 for a brilliant result to cap off the weekend.

The overall pace of both drivers from the final outing was also cause for encouragement, with Osborne’s fastest lap being just 1.6s off the fastest of the soft-shod runners, and Smith being an impressive 0.9s away from the fastest medium-tyred time. It’s clear that the team has found another performance increase on both tyre compounds, bringing the gap to the frontrunners down yet further.

Sam Osborne said: “Points! I never would have thought we would be saying that at the end of what’s been a really difficult weekend. Practice one was largely a disaster, FP2 slightly less of a disaster and then qualifying was back to disaster again. In race one we just couldn’t quite get the hard tyres to work for us, it got better on the mediums for race two, but the car just came alive on that soft tyre in race three. It handles so nicely and just feels mega. We just have to work out how to set the car up across the different compounds to make it more consistent. But that third race was just amazing. Keeping up with drivers like Matt Neal and Dan Cammish. It was out of this world to be racing against drivers like that. It eventually turned into a great weekend and the little MG really did its bit. What a superb result for both myself and the team.”

Rob Smith said: “Obviously I’m delighted for Sam and the whole team at EXCELR8 on our first points in the BTCC. It’s the culmination of a lot of hard work behind the scenes. Sadly, on my side of the garage that was probably one of the toughest weekends I’ve had. We went from starting off being fairly happy with the car to being in a place where I didn’t really know what was going on. It’s just been one of those weekends for me and we have to go away, reset and work how to move forwards again. Perhaps I went the wrong way with setup, and that’s led me down a slightly incorrect path, so we need to figure out what we need to do to correct the balance in the car ahead of Thruxton.”

EXCELR8 Team Manager Marvin Humphries added: “The weekend’s been good overall, but we really had to go through an uphill battle at times. We’ve been looking for those first points for a while now and it’s been coming, and today was really great in the end. Sam did brilliantly in race three, and it’s a shame that Rob had a tough weekend, but you have those in the BTCC. Everybody here is working hard to make sure we move forwards. I’ve worked with teams that have won races, and I think scoring points can mean just as much as a win to teams new to the BTCC, and it certainly means a lot to this one. It will be a big lift for the team going forwards.”

The next round of the Kwik fit British Touring Car Championship takes place at Thruxton in Hampshire on August 17/18.