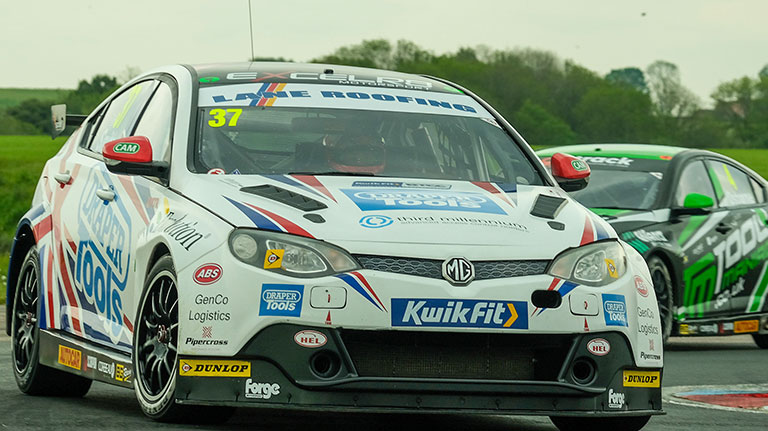 EXCELR8 Motorsport will continue its British Touring Car Championship learning curve as it heads North, in more ways than one, with round four taking place this weekend at Croft in North Yorkshire.

The EXCELR8 team – and drivers Rob Smith and Sam Osborne – have headed into each of the three rounds so far this season with at least some previous on-track experience to call upon. But Croft will be the first genuine unknown for the team, which has thus far shown an impressive aptitude to running its new MG6 GTs.

Croft will be an all-new challenge in terms of set-up. Consisting of a series of very fast sweeps around the back of the 2.1-mile circuit before a very slow and tight complex and final hairpin temper the average lap speed, cars must have both good high-speed balance and low-speed agility to fare well at what is usually considered to be a haven for rear-wheel-drive cars.

With no on-track testing at the circuit prior to the event, EXCELR8 will only have the Saturday free practice sessions to hone an effective setup, but does have some stock data to draw from following the previous appearance of the MGs at the circuit. Last year the car was a top-10 finisher in the hands of Rory Butcher, so there is some evidence that the longer-wheelbase MGs go well there.

The team has also been on a recruitment drive to add experience and depth to its engineering crew ahead of the mid-season break.

Both drivers, Smith and Osborne, have raced at the circuit before during their respective campaigns in the Renault Clio Cup and say they’re ready to dive into the BTCC action again.

Rob Smith said: “I haven’t raced at Croft since 2013, so I’ve got to get reacclimatised quickly. In some ways, going to a track we’ve not got much experience of is nice, because you approach the weekend with no expectations or pressure. It can actually be a good chance to start with some fresh thinking, attack the weekend and actually find we’re in a better place than we thought. I’m quietly optimistic about Croft. We’ve got extra engineering strength onboard and we’re learning the cars more every time we go out. The aim is to be in the mix inside the top 20 to start with, and hopefully be knocking on the door of a points finish.”

Sam Osborne said: “I’ve raced at Croft in each of the last two years in Clios, so it’s a track I know pretty well, and I really enjoy it there. There’s some great high-speed stuff and some tricky technical bits, so it’s got a nice mixture. The test we did recently at Donington has put us in a really good place, I think. We did some back-to-back testing to help me validate what I’m feeling in the car and to understand the MG better and it was brilliant. The aim for this weekend is to be competitive from the get-go and move forward up the grid.”

EXCELR8 team manager Oliver Shepherd added: “Croft is a new one for us as a team – we’ve had no testing or experience there previously so it’s a bit of a journey into the unknown. But that doesn’t mean we haven’t prepared at all. We did the test at Donington, which we got some serious value out of and we have a few new and experienced people in the team on the technical side, who I think can add a lot to our engineering knowledge. Historically Croft has been a strong track for the MG, we can see that in the results from last year and have a base setup to work on. I’m feeling really good with where the cars are at and where the drivers are at, so I think Croft can be a good one for us.”