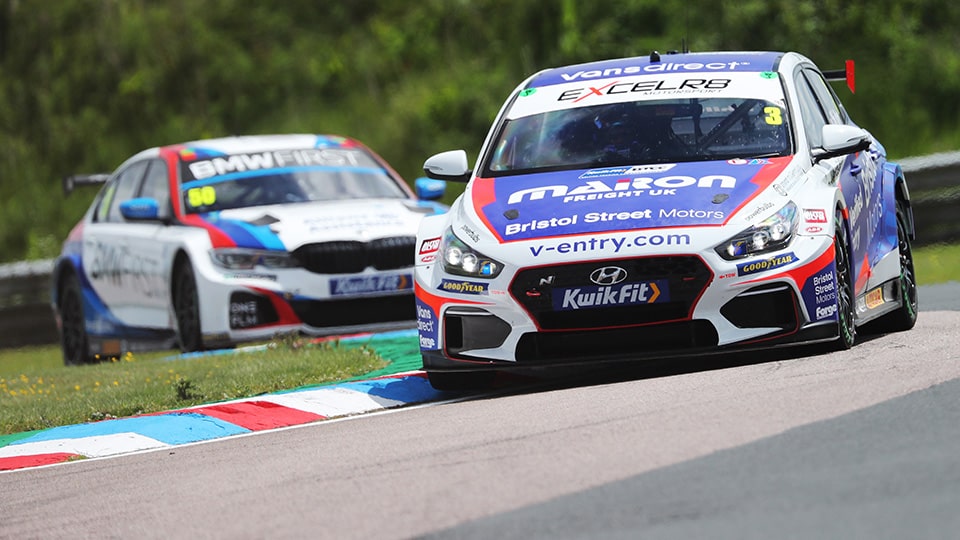 Bristol Street Motors with EXCELR8 TradePriceCars.com will look to return to the podium positions when the Kwik Fit British Touring Car Championship visits Oulton Park this weekend for the fourth round of the season.

Although the Suffolk-based team was able to secure five top ten finishes and retained its position at the head of the Teams’ Championship last time out at Thruxton, the weekend marked the first time this year that the Hyundai squad has failed to pick up a trophy – something it will seek to put right when it takes to the track in Cheshire.

An off-track excursion avoiding an incident ahead in race one at Thruxton hampered Tom Ingram’s chances of fighting at the sharp end of the field, although he recovered well to pick up a pair of top eight finishes.

Whilst he slipped to fourth in the championship standings as a result, Ingram now heads to Oulton Park with some hybrid power under his belt for Saturdays vital qualifying session, something which hasn’t been the case for the last two meetings.

Ingram has endured his fair share of misfortune at Oulton Park in the past but has shown his pace on multiple occasions, including last year when he set the fastest lap in two of the three races.

A podium finish is very much the goal this time around, and the same is true for Daniel Lloyd, who maintained his record of scoring points in every race this season at Thruxton.

One of only four drivers to have achieved that feat, Lloyd moved back up into eighth place in the championship going into one of his ‘home’ rounds of the season at a circuit where he secured his first ever BTCC front row start back in 2016.

Currently on a fun of five consecutive top ten finishes, Lloyd heads for Oulton Park aiming to reap the reward of the work that has been carried out over the opening three rounds to get his i30 Fastback N better suited to his driving style, with a first top three finish of the year being the target.

Tom Chilton picked up his first triple score of the season last time out at Thruxton, with the most experienced member of the EXCELR8 line-up hoping to fight his way forwards into the top ten.

Chilton has a solid record at Oulton Park in the past having scored five podium finishes, including a victory back in 2005 and a pair of top three finishes in 2018 en-route to third in the championship standings.

Like Lloyd, Chilton will seek to make the most of the lessons learned through the nine races run so far to challenge higher up the order and make up ground in the championship standings.

Jack Butel rounds out the line-up, with the Jersey racer also hoping that Oulton Park will provide him with the chance to fight for the kind of results his race pace has deserved this season.

Butel suffered from an unfortunate engine issue at Thruxton that thwarted his bid for a first points finish of the year, and he will seek to make amends during the long trip to Cheshire.

Although yet to make it into the points at Oulton Park, Butel has four top 20 finishes from six starts since making his BTCC debut in 2020, and has his sights firmly fixed on breaking his duck this time around.

In a change to the usual broadcast plans for this weekend, coverage of the three BTCC races will be shared between ITV4 and ITV, with race one and two airing on ITV at 12:20 and 14:25 before coverage switches to ITV4 for race three at 17:10.

Tom Chilton, #3, said:
“Oulton Park was a tricky meeting for me last season with the BMW, so I’m looking forward to going back there this weekend in a front-wheel drive car and am really hoping to push for some strong results.

“I’m now working with a new engineer and there has been a lot of work put in to get the car suited to my needs and to mould my team around me. I’m going into weekend feeling like I know the Hyundai a lot more, and can really look to push on.

“I have a car that I feel is going to be quick this weekend and we need to hit the ground running in practice so that we can look to qualify well, as qualifying around Oulton Park is almost as important as on a street circuit given how hard it is to overtake.

“Saying that, I think the hybrid is going to have an impact with the uphill drags that there are at Oulton Park and come rain or shine, it’s a circuit that I love and I’m going there hoping we can push for some trophies.”

Tom Ingram, #80, said:
“Qualifying is going to be super important this weekend because we all know how difficult it can be to overtake at Oulton Park. If you can lead into turn one at the start, you stand a great chance of winning the race, so it makes a strong result on Saturday more important than ever.

“As I said after Thruxton, the fact we have dropped to fourth in the points could be a blessing in disguise as it means we now have some hybrid to take into the weekend. It isn’t a lot with 4.5s per lap, but it’s a little hybrid boost that I’d rather have than not have.

“Although luck has never really been on my side at Oulton Park, I’ve shown good pace there in the past; like last season when we scored two fastest laps but were out of position for various reasons. I expect the car to be strong as usual, and if we can qualify well and fight for some strong results at the front, then I’ll be happy.”

Jack Butel, #96, said:
“It’s been a tricky season so far for me, and I’m a bit frustrated that we haven’t yet been able to put some points on the board. At Brands Hatch, we certainly showed the pace to fight higher up the order and then after the team changed the engine at Thruxton, I was able to battle forwards into the top 20 in race three before a trip off track.

“Hopefully this is the weekend where we can push for our first points of the season and I’m looking forward to getting out on track at Oulton Park. I know that qualifying is going to be important and we’ll be working hard in practice to get the car in top shape for the session. That way, we’ll be in the best position to try and make the most of our race pace when we get into Sunday.”

Daniel Lloyd, #123, said:
“I regard Oulton Park as something of a home circuit and it’s always one of the biggest rounds of the season because you get such a big crowd. I’m really looking forward to going there and putting on a show this weekend, and I feel we’re in good shape.

“In the opening three rounds, we’ve shown that we can be consistently in the top ten and that has been with a car that hasn’t been totally to my liking, and with a few issues that we’ve had to overcome.

“A huge amount of work has been going on behind the scenes with the car and this is the weekend when I hope we can really benefit from it. I’m hoping to push forwards into the top six, and my goal is to try and bring home my first silverware of the year.”

Justina Williams, Team Owner, said:
“The fact we were a little disappointed not to bring a trophy home from Thruxton shows how far we have come as a team and we head for Oulton Park confident that we can be back in the mix for top three finishes. All four drivers have shown good pace there in the past, and with the package we now have, I’m hopeful of strong results across the board this weekend.

“Track position is going to be key so we’ll be working hard on Saturday to make sure we maximise our result in qualifying, and that will then set us up to challenge towards the sharp end on Sunday.”