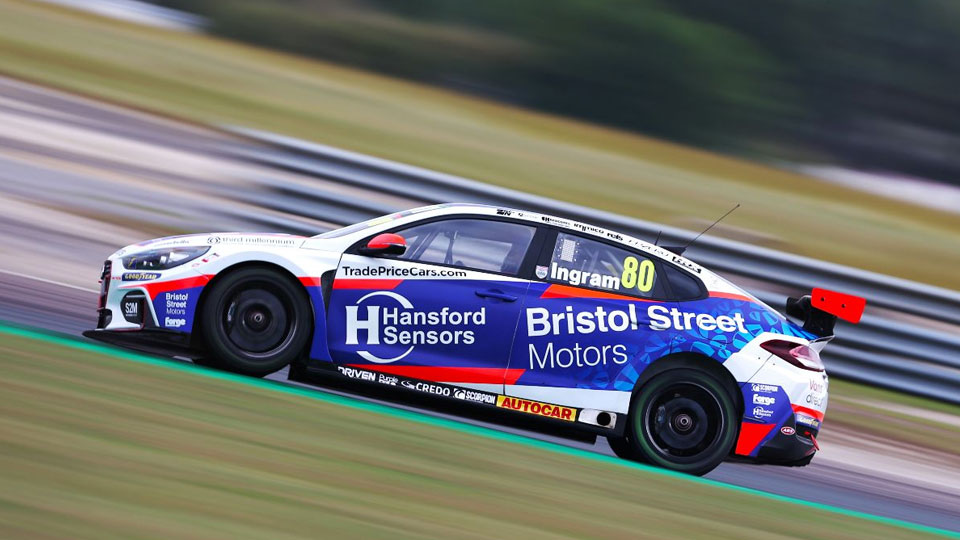 Bristol Street Motors with EXCELR8 TradePriceCars.com will bid to keep its Kwik Fit British Touring Car Championship title challenge firmly on track this weekend when the series heads to Silverstone for the penultimate meeting of the year.

The Suffolk-based outfit makes the trip to the home of the British Grand Prix amongst the contenders for top honours in Britain’s premier racing series, and with realistic hopes of challenging for two of the championship titles still on offer.

Tom Ingram currently sits third in the Drivers’ Championship, but is just 18 points away from top spot as he arrives at a circuit where he has enjoyed huge success in his BTCC career to date.

The two-time Independent champion has scored at least one podium finish at Silverstone in each of the last six seasons, and has taken to the top step on five occasions – more than at any other circuit on the schedule.

Having won three times so far in 2022, Ingram will be bidding to add to his previous success at the circuit to keep the pressure on in the title race, with the 29-year-old seeking to remain in contention for the crown going into the Brands Hatch finale.

Experienced team-mate Tom Chilton has also won more times at Silverstone than any where else during his time in the BTCC, with five victories of his own at the Northamptonshire circuit.

Chilton has endured a wretched run of form in the last two meetings after technical issues at Snetterton and race one contact at Thruxton that left him unable to score in the last six races.

That was a particular source of frustration for the 37-year-old having shown improved pace at the wheel of his Hyundai i30 Fastback N, and he goes into the weekend hoping to turn his speed into three strong results on track.

Daniel Lloyd is also eager to challenge at the sharp end of the field at the circuit where he enjoyed what was then the best weekend of his BTCC career twelve months ago – with a brace of podium finishes.

Lloyd finds himself embroiled in a tight fight for eighth in the championship standings, and is one of five drivers covered by just eleven points going into the penultimate meeting of the year.

This weekend will see Lloyd celebrate his 100th start in the series and like Ingram and Chilton, he makes the trip to Silverstone looking to challenge for silverware.

Trophies are also the goal for Jack Butel, who will be seeking to fight for top honours in the Jack Sears Trophy for the second weekend in succession.

Butel secured the JST win – amongst those drivers without an overall BTCC podium – for the first time this season at Thruxton last time out, and will bid for a repeat at a venue where he showed impressive pace in 2021; matching the pace of his more experienced team-mates.

A strong qualifying performance on Saturday will be key to Butel’s chances of success, with his goal being to once again break into the overall points scoring positions to add to his championship tally.

Tom Chilton, #3 said:
“Although the results on paper might not reflect it in recent rounds, I feel we’ve taken huge strides forwards with my car and it leaves me feeling confident going into this weekend. We have worked hard to get the car where I want – and need – it to be, and I now feel we’re in a position to benefit from the huge amount of effort that has gone in from the whole team.

“I know I’m going to Silverstone – which is a circuit I love and where I’ve won in the past – with a quick car that is more than capable of fighting towards the sharp end of the field. It’s been too long since I was last on the BTCC podium, and that is something I want to put right before the season comes to an end.

“Hopefully, I’ve got my bad luck out of the way over the last two meetings and I’ll be giving my all this weekend to try and bring home some silverware.”

Tom Ingram, #80 said:
“I’m really excited about the weekend ahead as Silverstone is a circuit where I’ve always gone well in the past. People say it looks like an easy circuit when there are only really four corners and a few straights, but that actually makes it more of a challenge because the times are so close.

“You have to really maximise what you have, and I believe that Saturday will be the most important qualifying session we have had so far this season. A good grid slot is going to be vital because if you find yourself back in the pack, the fact things are so close will make it tricky to fight your way forwards.

“Although we’re now getting into the business end of the season, I’m feeling really relaxed going into the weekend. We’ll just focus on doing the best job possible and as far as I’m concerned, it’s a case of maximum attack.”

Jack Butel, #96 said:
“Winning the Jack Sears Trophy last time out was a huge boost to my confidence after a challenging season, and it was a massive relief to get some points on the board. It showed that we have the pace to fight well inside the top 20 and just needed to avoid some of the bad luck we’d faced in earlier rounds.

“I’m really excited about the prospect of going back to Silverstone as it was one of my most competitive weekends last season in terms of pace, where I was setting times that were similar to Tom [Ingram].

“It will be very close with the lap being so short, but hopefully we can have another good run in qualifying and that will set me up to fight for some more points on race day.”

Daniel Lloyd, #123 said:
“I’m feeling both excited and optimistic about the weekend ahead, and head to Silverstone confident about being back at the sharp end of the grid. After the challenges I’ve faced in recent months, the goal for me now is to have a strong end to the season – particularly with Silverstone and Brands Hatch being two circuits where I’ve enjoyed success previously.

“On a personal level, I had a great weekend at Silverstone last year with the double podium, and given how strong the Hyundai was, I’m hoping to try and replicate those results. I’m not in contention for a title and having to worry about championship points, so if I can be in the mix for the podium places then I’ll be happy, as it’s results that really matter at this stage.”

Justina Williams, Team Owner, said:
“We’re really getting to the business end of the season now and it’s great for us as a team to be right in the middle of the title fight, as it is where we wanted to be when we first joined the BTCC grid back in 2019.

“There is no doubt that we have taken huge strides forwards over the last few seasons, and now we have to give it our all over these final two rounds to see where we end up in the final reckoning.

“Silverstone is a circuit where all four drivers have gone well in the past, and where we know the Hyundai should be quick which means we can head their in confident mood. Whilst it would be nice to come away with some trophies, the points are the most important thing at this stage and hopefully we pick up a good haul to boost our total.”