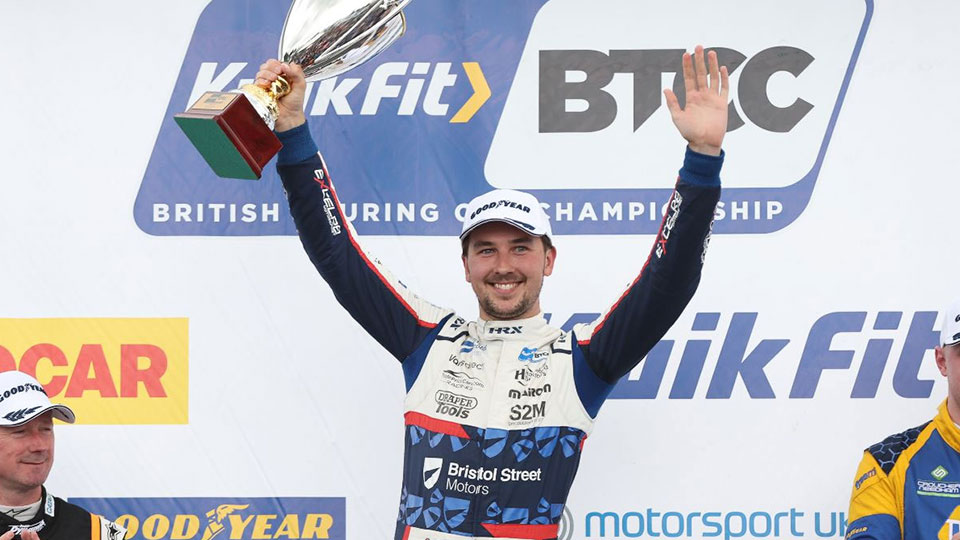 Bristol Street Motors with EXCELR8 TradePriceCars.com secured a double win for the first time in the Kwik Fit British Touring Car Championship at Oulton Park to maintain its bid for title honours.

The Suffolk-based squad made the long trip to Cheshire looking to return to the podium places after a tricky weekend at Thruxton, with hopes high of strong results at a circuit where the Hyundai i30 Fastback N had scored two fastest laps last season.

Free practice proved to be encouraging for the team, with Tom Ingram second quickest in both sessions and Daniel Lloyd also showing strong pace to end up with the third best time.

Tom Chilton was able to lap within a second of the fastest time, although Jack Butel was unable to show his true potential and went into qualifying seeking to extract more from his car.

When the all-important session arrived on Saturday afternoon, Ingram was able to build on the pace displayed in practice as he secured a stunning pole position – breaking the lap record as he put EXCELR8 and Hyundai at the front of the grid for the first time in the series.

Just behind him on the grid, Lloyd produced a fine run to third place for his best qualifying result of the campaign to date, with Chilton in 23rd after an unfortunate clash with another car prevented him from improving his time on his final run. Butel would improve on his practice time by nearly two seconds, and ended up 26th ahead of the opening race.

That opening race on Sunday would see Ingram convert pole into a second victory of the campaign thanks to a controlled drive at the front of the pack, even after a mid-race safety car period allowed the field behind to close in.

Lloyd looked set to join him on the podium as he ran strongly in the opening stages of the race, setting the fastest lap of the race as he sat in third before the safety car period. After the restart, Lloyd would find himself shuffled back down to seventh place, with Butel in 24th despite mid-race contact from the Infiniti of Dexter Patterson.

Unfortunately for Chilton, an early charge up the order to 18th by the end of lap three came to an early end when he pitted with a temperature warning light illuminated on the dash.

Race two would see a similar result for Ingram as he once again led the race from start-to-finish to take his third win of the campaign in impressive fashion. It marked the first time that the team had secured two wins on a race weekend, and was also the 300th victory in the series for an NGTC-spec car.

Lloyd would run in seventh spot for much of the race before slipping back to eighth late on when Jake Hill nipped ahead at the hairpin whilst Chilton had made up impressive ground to come through to the fringes of the top 20 before he was run onto the grass at Clay Hill and was forced to retire to the pits with rising engine temperatures.

Butel meanwhile recovered well from a tough opening lap that saw him drop back to 28th place to come through to the finish in 23rd.

The reverse grid final race would see Lloyd leading the team’s challenge from fourth on the grid and he held his position through the opening corners before he was tipped into a spin on the exit of the hairpin.

The #123 Hyundai made heavy contact with the barriers before bouncing back onto the circuit where it was then collected by the BMW of Colin Turkington, with Daniel forced out on the spot. Having been taken to the circuit medical centre, he was then transferred to a local hospital for precautionary scans but was able to escape without serious injury – a testament to the strength of the Hyundai given the high–speed nature of the contact.

The incident saw Ingram forced to take to the grass in avoidance and he would drop to the back of the grid when he pitted behind the safety car to have grass removed from the front of the car.

Both Chilton and Butel had been able to avoid the incident and when action resumed, Butel found himself running in 17th spot with Chilton losing ground after a clash with Sam Osborne. He and Ingram would then battle through the pack and the three Hyundais would be involved in a train of cars of dicing for the final points, with Ingram taking the flag in 17th spot, closely followed by Butel and Chilton in 19th and 20th.

At the end of the weekend, Ingram now sits second in the overall championship standings with Lloyd retaining his place in the top ten, whilst Bristol Street Motors with EXCELR8 TradePriceCars.com continues to lead the Teams’ Championship ahead of the next meeting at Croft in two weeks time.

Tom Chilton, #3, said:
“It’s been a pretty tough weekend and I’m gutted to come away from it without putting a point on the board. In both race one and race two, we had made up some really good ground so to then lose two potentially strong results was really disappointing – particularly in race two when a dangerous move that put me on the grass filled the front of the car with grass.

“In the last race, I managed to avoid all the kerfuffle ahead to make up ground and then trying to pass Sam Osborne on the outside at hairpin and he turned across me and I had no option but to take to the grass and it dropped me back down the order. I didn’t think we deserved that after what happened in race two, but as disappointed as I feel, the important thing is that Dan and Colin are both okay after that incident, as it was a nasty one.”

Tom Ingram, #80, said:
“The car this weekend has been absolutely incredible. To get in a car and not have a single criticism because it is doing everything you want is very rare, but that is what I had. I really couldn’t have asked for more from it and having come into the weekend having never made it onto the podium here, I leave now having bagged pole position and a double win – which I’d say is pretty successful.

“The last race was bedlam in terms of trying to stay out of trouble. I came over the hill to find cars all over the place in front of me and I just had to bail out and went right across the grass, which ultimately resulted in us ending where we did. Seeing a car sideways in front of the pack like that is never nice, and the important thing is that everyone is okay.”

Jack Butel, #96, said:
“What a weekend that turned out to be. Practice was difficult but we made changes for qualifying and things were much better, although we still weren’t as high up as we should have been.

“Race one wasn’t ideal but then in races two and three we were able to make up ground, and in the final race in particular we showed strong pace to run with the pack and it was good for three of us to be running in formation together. It’s just a shame to see what happened to Dan and I’m glad that has escaped without any serious injuries from what was a pretty big accident.

“For me, this weekend has shown again that I need to work on getting the most from the car in qualifying, because ultimately we just had a bit too much to do in the races to score the points we deserved.”

Justina Williams, Team Owner, said:
“This has certainly proved to be a weekend of mixed emotions. On the one hand, it is fantastic to have secured our first double win in the BTCC and credit to Tom Ingram for the way he drove in the first two races to take the win.

“Without the safety car backing up the field, I’m confident Dan would have joined him on the podium in at least one of those two races, and to see his weekend end as it did was hugely disappointing, but the important thing is that he will okay after what was a very big hit.

“Both Tom Chilton and Jack have driven better than their results would suggest this weekend and we’ll now head back to base and regroup ready to come out fighting again at Croft next time out.”