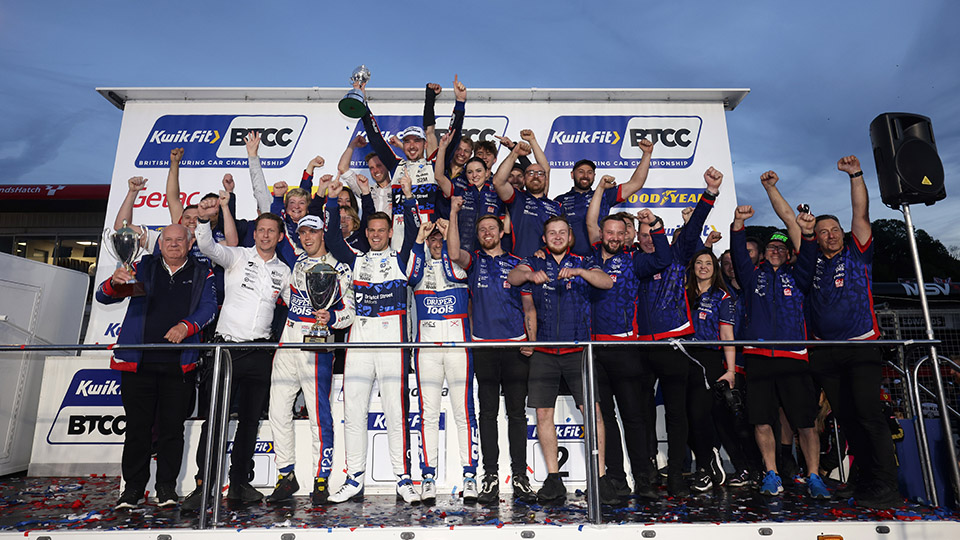 Bristol Street Motors with EXCELR8 TradePriceCars.com enjoyed a dream weekend when it mattered most to wrap up the Kwik Fit British Touring Car Championship title at Brands Hatch.

The Suffolk-based outfit went into the weekend as part of a four-way fight for the drivers championship title, with confidence high on the back of the team’s most successful season to date.

Title contender Tom Ingram gave an indication of what was to come in free practice as he topped the times, with Daniel Lloyd also at the sharp end as two Hyundais ended up inside the top three. Tom Chilton meanwhile was only seven tenths of a second off the pace in P15, with Jack Butel on the fringes of the top 20.

Come qualifying, Ingram stormed to pole position by more than four-tenths of a second with an astonishing performance that saw him set four laps good enough for pole and break the lap record, with Lloyd securing a place on the sixth row of the grid.

Chilton would suffer an engine issue that left him to start back in 22nd place, with Butel lining up in 25th place.

Race one on Sunday went perfectly to plan for Ingram, who controlled things from the front despite two safety car periods to grab a crucial fifth win of the season, setting fastest lap en-route to a victory that allowed him to move into the championship lead.

In the heart of the midfield battles, Lloyd fought hard to take 13th place, with Chilton making forward progress to finish just outside the podium spots in 16th. Butel would also fight his way forwards in the race to cross the line in 20th spot.

Despite the best efforts of title rival Jake Hill to find a way through, Ingram repeated his race one result in race two as he once again led from start-to-finish to strengthen his position at the top of the standing going into the final race.

Both Lloyd and Chilton would again make up places to finish inside the points in tenth and 14th positions, although Butel would find himself in the wars in the early stages as he dropped down the order before working his way back to 24th.

The reverse grid draw saw Lloyd line up on pole for the final race of the season and, like Ingram in the earlier two races, he led from start-to-finish to grab his third win of the campaign and cement his place inside the top ten in the championship standings.

Ingram meanwhile produced a drive worthy of a champion as he stayed out of trouble in the early skirmishes before settling into position ahead of Hill and within touching distance of Ash Sutton on track.

Fifth place at the finish meant Ingram wrapped up the championship title for the first time, which also marked a first BTCC crown for both EXCELR8 and for the Hyundai brand.

A race long battle with the retiring Jason Plato ended with Chilton crossing the line in 18th spot, with Butel just behind in 19th to round out his campaign with a positive run through the field.

Tom Chilton, #3 said:
“I’m absolutely delighted for the team and for Tom that we’ve been able to win the title. He really deserves the championship, particularly for this weekend where he has absolutely nailed it – and it’s also great for Dan to win the final race of the season.

“On a personal level, I’ve enjoyed some really good battles on track this weekend and the final race was particularly special to fight throughout with Jason Plato on what is set to be his last BTCC appearance. It was like the good old days and when I raced him to the line, it was like a repeat of our fight at the same circuit back in 2009 when he just pipped me to a win.

“A nice clean battle with him was a great way to end the year and brought back a lot of memories, and now I can turn my focus towards 2023 and look to come back stronger and challenge at the front myself.”

Tom Ingram, #80 said:
“It’s absolutely bonkers to be able to stand here and say that I’m the BTCC champion. This is a moment that I have dreamed about and that I’ve chased for my whole career, but I never envisaged that I would feel as emotional as I did when I crossed the line.

“To qualify on pole and then win two races with fastest lap was just remarkable, and then we had a good battle in race three to finish things off. This has been a stressful weekend and a stressful season, but we’ve come out on top at the end and I’ve loved every minute of it.

“The fact that I had such a perfect car this weekend is down to all the hard work that has gone on behind the scenes and whilst it is fantastic to take my place alongside all of the famous names on the trophy, and to realise a dream I’ve had since I was ten years old, this isn’t just a win for me.

“This is for every single person here who has worked so hard all season; we’ve only gone and won the bloody thing!”

Jack Butel, #96 said:
“Like my season, this has been a weekend of ups and downs but it has ended with a positive result in race three. There is no getting away from the fact that this year has been a huge challenge with everything I’ve had to deal with off-track and then the misfortune I’ve had on-track, where a lot of things outside our control have really hurt my chances.

“Big congratulations to Tom for winning the title today. He’s done a mega job all year and really deserves to be crowned champion.”

Daniel Lloyd, #123 said:
“I’ve had my fair share of bad luck this season so when I had the good luck of the reverse grid, I had to make sure I took it! I’d been struggling with the car up to that point, but we made a load of changes for race three and the colder temperatures and clear air worked in my favour.

“I was able to soak up the pressure at the front and to end the season with a third win of the year is fantastic and a great way to head into the winter. There is a lot of hard work to do now as I look towards 2023 but I’m really proud with how this season has gone.

“Huge congratulations to Tom as he deserves to be champion, and what a great way for us as a team to finish the season with three wins.”

Justina Williams, Team Owner, said:
“It’s hard to find the words to describe how I feel at the end of the weekend as things couldn’t really have gone any better. To win all three races and wrap up the biggest championship title in British motorsport is absolutely fantastic and an astonishing way to end what has been a brilliant season.

“I’m extremely proud of the way we have performed this year, which was a big step into the unknown with the introduction of the hybrid systems, and the fact that we were running our own engine for the first time. A huge thank you has to go to Swindon Powertrain for the work they have put in throughout the season to help us optimize our package.

“The drivers have done a fantastic job on track but everyone behind the scenes has played their part, and I couldn’t be happier.”