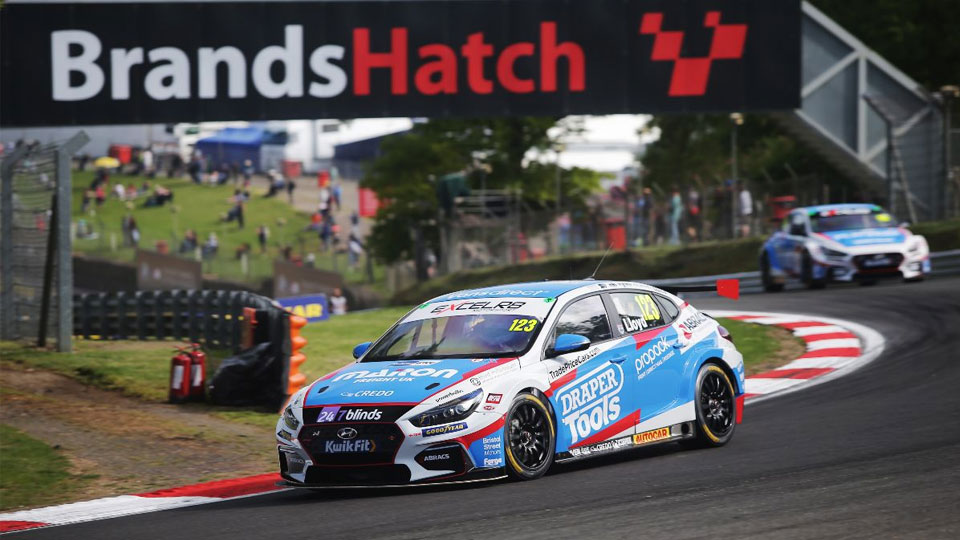 Bristol Street Motors with EXCELR8 TradePriceCars.com was able to maintain its place at the head of the Kwik Fit British Touring Car Championship on what proved to be a challenging, mixed-weather weekend on track at Brands Hatch.

Things started well for the Suffolk-based team, with points leader Tom Ingram topping the times in the opening practice session of the weekend despite not being able to use hybrid power due to his championship position.

He would then end FP2 sitting in third place – with Tom Chilton and Daniel Lloyd also lapping with a second of the fastest time and Jack Butel getting plenty of meaningful mileage under his belt after a tricky opening meeting at Donington left him on the back foot.

Come qualifying, Ingram would secure sixth spot on the grid in a closely-fought session that saw over half of the grid dip below the previous lap record, with Chilton in twelfth and Lloyd in 16th; the latter having suffered an issue with his hybrid that cost him time. Butel meanwhile would line up in 27th, with his focus on trying to make up ground when the race action kicked off.

Rain in the preceding Porsche race provided a fresh challenge for the quartet going into the opening race of the weekend, with all four competing in the wet with hybrid power for the first time.

In tricky conditions on a drying track, Ingram fought his way forwards through the field with a number of impressive overtakes; making light of only having nine laps of hybrid available to climb into the top three. When Jake Hill then had a moment at Paddock Hill Bend, Ingram took full advantage to grab second place and add another podium to his total.

From twelfth on the grid, Chilton was in the heart of the action in the midfield and ran tenth in the early stages. Part of a four-car battle for position throughout, he would start the weekend with a 13th place finish with Lloyd two spots behind after he recovered well from running wide through the gravel at Clearways after an issue with the brake bias on lap one to grab a point, despite being without hybrid.

Jack also made good progress as he showed impressive speed to come through to 19th place, setting a fastest lap comparable with the top six.

With the rain continuing for race two, Ingram lined up second on the grid but was shuffled back to fifth in the early laps, where he would remain right through to the chequered flag.

Lloyd’s recovery from the opening lap incident in race one continued with a battling drive through to eighth place – the highlight being a three-way fight with the BMWs of Colin Turkington and George Gamble in the closing stages – whilst Chilton would take the flag in twelfth spot.

Jack would repeat his result from race one to cross the line in 19th having lost ground avoiding an incident at the start, with the reverse grid draw for race three seeing Chilton drawn onto pole position.

The final race would be held in the worst of the conditions, with Chilton holding position at the start before the safety car was called out to recover the Honda of Jason Plato from the gravel.

On the restart, he would stay out front before falling prey to some of the quicker cars behind, with his hopes of bringing home a top six finish ended by a contact-induced puncture that forced him to pit. A spin into the gravel at Clearways would then see his weekend end with an unfortunate DNF.

From eighth on the grid, Ingram battled his way through to fourth place at the finish to retain his strong start to the campaign, with Lloyd adding another top ten finish to his tally with ninth spot. Jack meanwhile would once again take the flag in 19th having raced hard in midfield pack.

At the end of the weekend, Ingram continues to lead the overall championship standings, with Bristol Street Motors with EXCELR8 TradePriceCars.com on top of the Teams Championship and EXCELR8 Motorsport heading the Manufacturers/Constructors points.

Tom Chilton, #3, said:
“It’s always close round here and it was bonkers that a tenth of a second would have seen me up in the top six in qualifying. It’s been a tricky weekend though, and I struggled a bit for pace which is something we’ll look at before Thruxton.

“We managed to bag points in the opening two races and it’s frustrating that we ended the weekend in the gravel when I’d started on pole, but unfortunately I was just struggling for grip after the early laps and then contact from George Gamble damaged the front left.

“A little rub with Ash Sutton on the next lap was enough for the tyre to let go and I think it was just a cold tyre that then caught me out at Clearways when I went back out – and there was no saving it in those conditions. Roll on Thruxton, where I’ll be fighting hard to bounce back.”

Tom Ingram, #80, said:
“All in all we’ve had a solid day. To come away from race one with a podium was a bit of a surprise after qualifying, but the conditions worked in our favour a bit. It was changing all the time which made it difficult, but we were able to stay out of trouble and have bagged more solid points.

“At this stage of the season, that is the real focus rather than worrying about where we are in the championship, although it’s nice to be going away from here still leading the standings. We’ve also now got some experience behind us when it comes to running the hybrid in wet conditions as – amazingly – all of our pre-season running was in the dry.

“It’s good that we’ve been able to tick that box, and we can leave Brands Hatch with our heads held high.”

Jack Butel, #96, said:
“After Donington Park, I would have bitten your hand off for three 19th place finishes if you had offered them to me, although I do feel mixed emotions a bit. Qualifying was difficult and it left me with work to do in the races, and I don’t feel our pace is reflected in the end results.

“The positive is that we have had good pace in all three races but unfortunately, we just haven’t been in the position to really benefit from it. I hope we can go well at Thruxton, where I won the Jack Sears Trophy last season, and push for the kind of results that I feel we deserve.”

Daniel Lloyd, #123, said:
“Brands Hatch has thrown a lot at us this weekend and it’s been a challenging one. We went a certain way with the set-up coming into it but we could see in practice it was the wrong call, and we made changes for qualifying only to lose the hybrid, which cost me time.

“After the issue at the start of race one, it was all about recovering as best we could and we came through the pack well to score points in all three races and grab another pair of top ten finishes.

“Although there is a bit of frustration that we weren’t able to score the results I know we could have done, the pace is in the car and it won’t take much for us to be right up there fighting in the top five in the events to come.”

Justina Williams, Team Owner, said:
“It’s been a really challenging weekend with the conditions that were thrown as us on race day, but it’s mission accomplished in terms of retaining our position at the head of the standings.

“Although we have had a few niggling little issues, the pace of all four drivers this weekend has been encouraging and it shows how good our package is with the new Hyundai engine and the hybrid system in place.

“Yet again, there are plenty of positives to take away from this weekend and we’ll go to Thruxton keen to maintain our strong start.”