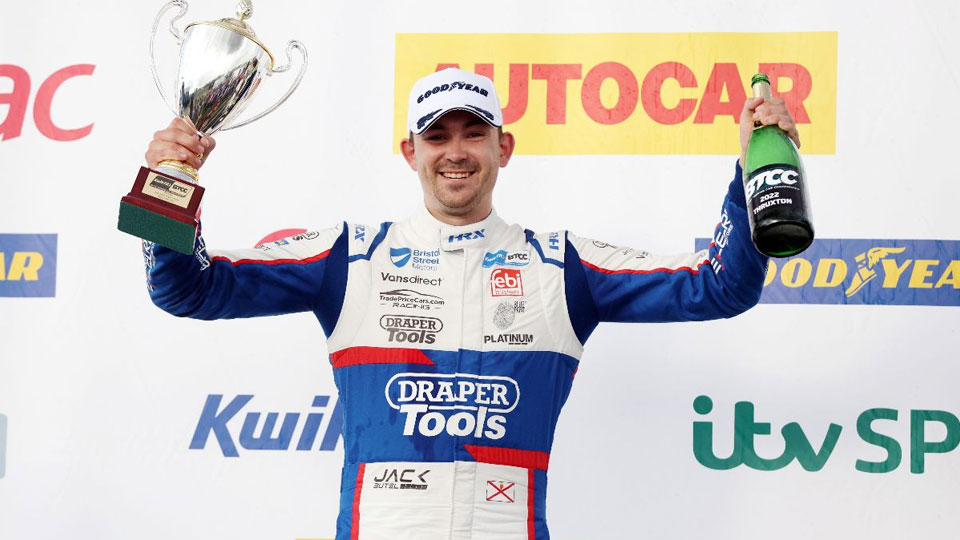 Bristol Street Motors with EXCELR8 TradePriceCars.com fought hard on track to maintain its challenge for top honours in the Kwik Fit British Touring Car Championship at Thruxton, whilst also securing the Jack Sears Trophy for the first time this year.

The Suffolk-based team headed to the fastest circuit on the calendar sitting second in the Teams’ Championship and with drivers Tom Ingram, Tom Chilton, Daniel Lloyd and Jack Butel all optimistic about what they could achieve at a venue where the Hyundai i30 Fastback N had been quick in the past.

A tricky session however would see only Chilton break into the top ten as he set the ninth best time, with Ingram back in 13th – albeit less than a tenth of a second behind. Lloyd would end up 20th on the grid having lost his fastest lap to track limits, with Butel one spot further back.

The team has now exclusively revealed that post qualifying analysis identified serious powertrain concerns on Ingram’s car, which contributed to the disappointing qualifying result and would also seriously impact on the remainder of the race weekend.

Frantic overnight work by the team alongside engine partner Swindon Powertrain created a series of emergency counter measures, including a complete engine change, to increase the chances of Ingram’s car being able to finish the races, let alone compete at the front.

A strong start for Chilton in race one saw him making up places before he was tagged by the Toyota of Rory Butcher going through the fast right-hander at Church – sending the Hyundai spinning into the infield at speed. Luckily remaining on its wheels, Chilton would recover to the pits for fresh tyres and would rejoin lap down in 28th spot, the pace from that point on being an indication of what might have been.

Instead, despite nursing the newly revealed powertrain concerns that could have led to a non-finish, it was Ingram who would lead the team’s challenge as he came through the opening lap having moved up into the top ten and would take the flag in ninth – allowing him to take points out of championship leader Colin Turkington in the process.

Lloyd and Butel would both be part of a titanic battle for the final points scoring positions, with Lloyd taking the flag in 17th despite his hybrid system failing, and Butel finishing 20th having lost ground late on with a wild moment at turn one.

Although lacking the outright pace of the leaders, Ingram adapted to the continuing technical issues and would battle his way forwards to sixth in race two, whilst Lloyd was also able to break into the points as he continued to work his way up the order and took the flag in 13th.

Both Butel and Chilton would be delayed by an incident involving Dexter Patterson’s Infiniti at the final chicane on lap four, but would climb back up to 21st and 22nd place by the finish.

The reverse grid saw Ingram drawn in P6 for the final race and a spirited attack at the start saw him fight his way to fourth while continuing to carry the cloud of a possible engine related DNF.

Unfortunately, a further unrelated gearshift problem caused Ingram to suddenly lose places, allowing championship rival Ash Sutton – along with Rowbottom and Butcher – to skip past and demote him to P7. However, he would display guile and determination to find ways to work around the issues and managed to match the pace of those ahead to maintain seventh place to the flag, despite having to manually shift between fifth and sixth gears. The resulting three top tens from the weekend to leave him third in the championship standings.

Lloyd would make up a place on the opening lap and ultimately took the flag in eleventh spot, with Butel and Chilton working their way up to 17th and 18th heading into the final laps.

When Ash Hand and Adam Morgan then tangled on the penultimate tour, Butel was able to come through to 15th to snare the final overall point, with Chilton just missing out in 16th. That result was enough to see Butel win the Jack Sears Trophy having scored the most points amongst the eligible drivers across the three races.

Tom Chilton, #3 said:
“It’s a case of what should have been this weekend. We had a fantastic qualifying session on Saturday and then got a good start in race one to climb up into the top six before I got fired off by Rory on the exit of Church. That wasn’t a nice moment, and I was so lucky that the car didn’t dig in on the grass and go over.

“That moment ruined the rest of my weekend as I have no doubt we’d have scored three solid race finishes with the pace we had in the car, and could have been in the mix for a reverse grid podium or win had it not been for something outside my control.

“It’s a real shame for the team as they worked so hard and I feel I drove well – I just need some luck.”

Tom Ingram, #80 said:
“On the surface it would be easy to be disappointed this weekend, but when you look at the standings, we’ve only lost a handful of points to Colin despite the real possibility that the issues identified on Saturday could have resulted in three non-finishes.

“We came in 15 points behind and we go away 18 behind, so things certainly could have been a lot worse and hopefully we’ll get to the end of the season and look at a weekend like this as being one that won the title for us rather than one that lost it. This is especially as the team worked tirelessly into the wee hours on Saturday evening/Sunday morning to implement bush fixes to give us a chance of finishing three races.

“We were on the back foot a bit after qualifying which didn’t allow us to really maximise the limited potential we had, but we just had to put it behind it and focus on doing the best job we could when we were out of position on the grid. We fought back and all things considered, I feel we did a good job despite the underlying problems we had to manage.”

Jack Butel, #96 said:
“It’s been a challenging season for me and coming to Thruxton, I’d have been happy if we could take three race finishes without any problems. We’ve been around the top 20 throughout and when I got into the points in race three, it was a really emotional feeling – and that was before I found out I’d won the Jack Sears Trophy!

“We’ve worked so hard to try and get a points finish on the board this season so to now do it is great, and gives me a boost as we look ahead to Silverstone. We showed decent pace last season so I’m looking forward to going back there, but before that, I’m going to enjoy the feeling of leaving here with a trophy.”

Daniel Lloyd, #123 said:
“On paper, the results aren’t the best I’ve had this season but the big thing is that I feel so much more relaxed in the car compared to recent rounds. I feel like I’ve got my head back into gear and have raced well, but a lack of hybrid in race one really hampered my progress.

“I don’t think we had the ultimate pace but we have scored points two of the races, which has allowed me to retain a place in the top ten in the standings. Thanks to the support of Bristol Street Motors and the fans who have backed me, hopefully we can go into the final meetings and finish on a high.”

Justina Williams, Team Owner, said:
“As a team, it’s been an incredibly challenging weekend in the garage and on track, but I’m delighted for Jack to be able to secure the Jack Sears Trophy as he deserves it for the effort he has put in this season.

“Partly due to the critical issues we had to manage we haven’t quite had the outright pace to challenge for top honours but all four drivers have given their all on track and the points we have scored here could well be the key ones when we get to the end of the season.

“I want to thank all the team for pulling together to manage our issues over the weekend and now that we know for sure what the issues were, we can guarantee these will be rectified in the short break before Silverstone, where we will come out fighting like a pride of lions.”