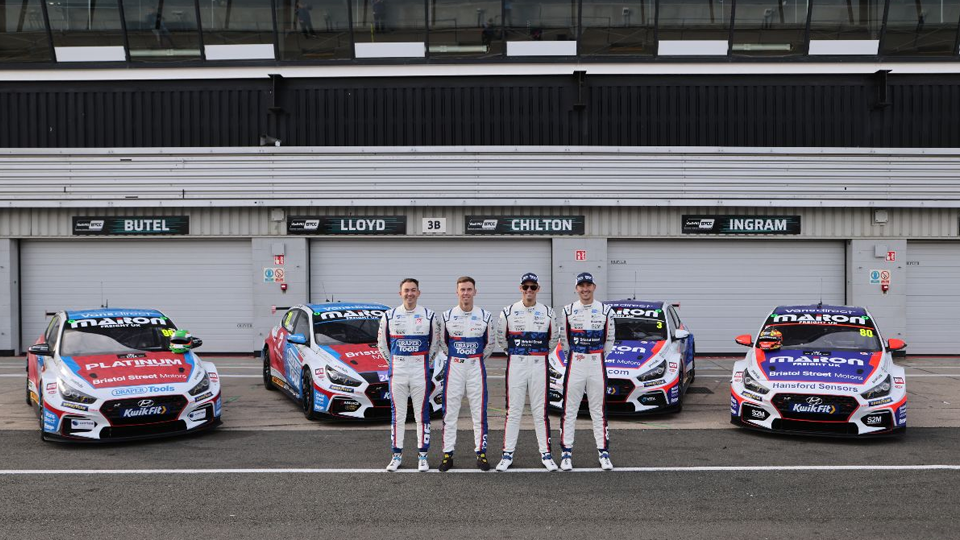 Bristol Street Motors with EXCELR8 TradePriceCars.com will head into battle for the final time this season when the fight to secure the 2023 Kwik Fit British Touring Car Championship draws to a close this weekend at Brands Hatch.

The Suffolk-based outfit makes the trip to Kent firmly embroiled in a four-way battle to secure the biggest prize in British Motorsport, with just three races left to determine who will emerge on top.

Tom Ingram heads the team’s challenge going into the finale and sits just seven points away from top spot after a strong campaign that has seen him win four times – including race three last time out at Silverstone.

Ingram has already scored more points this year than in any of his previous seasons in the BTCC and will be able to benefit from having slightly more hybrid power than the two drivers ahead of him – Ash Sutton and Jake Hill – going into the weekend.

Having scored multiple podium finishes around the famous Grand Prix loop in the past, Ingram will now hope for three front-running results as he bids to add an overall BTCC championship to the Independents’ Trophy titles he secured in both 2017 and 2018.

Alongside Ingram, Daniel Lloyd will be looking to battle his way back into the top ten in the championship standings to conclude what could also be his best BTCC season to date.

A double winner at Croft earlier in the year, Lloyd has been a consistent points scorer throughout the campaign and will hope to try and replicate the podium finish he secured at the circuit last year.

Such a result would boost Lloyd’s chances of securing a place inside the top ten, with the Yorkshire racer currently five points shy of tenth spot and within striking distance of the top eight.

Tom Chilton will also be looking to rise up the championship standings on the final weekend, with the experienced racer seeking to build on the solid pace he has shown in recent events.

Chilton grabbed his best result of the season so far at Silverstone last time out and is bidding to end his campaign on home soil with another solid haul of points to cement his place inside the top 15.

In fact, with the GP loop having been the scene of his strongest weekend of the year twelve months ago and given the improved pace in his Hyundai, Chilton heads into the weekend optimistic of being in the mix for silverware in the final three races.

Jack Butel meanwhile arrives at Brands Hatch buoyed by the pace he has displayed in the last two rounds, with a Jack Sears Trophy victory at Thruxton being followed up by a strong weekend at Silverstone.

Although unable to add to his points tally last time out after contact in race one, Butel displayed top ten pace across the weekend which leaves him optimistic of being in the mix for points during the season finale.

The Brands Hatch GP circuit was the venue where Butel scored his first BTCC points finish, although he was unable to take part in the race meeting last year as a result of concussion sustained in an incident in the previous event – meaning he will be racing the Hyundai on the GP loop for the first time.

Saturday’s qualifying session is scheduled for 15:40 and will air live on the ITV website, with the three races that will determine the destination of the title then taking place live on ITV4 HD on Sunday at 11:30, 14:30 and 17:15.

Tom Chilton, #3 said:
“Silverstone was a really good weekend for me, and it was clear to see we’re in a position with the car where our race pace is really strong. What we now need to do it focus on making sure we can get a good time from it in qualifying, and that will be the first goal heading into the final meeting.

“Brands Hatch GP is a fantastic circuit and if we can nail qualifying on Saturday and get ourselves higher up the grid, then I certainly feel that we have the pace in the car to be pushing for a podium finish. That would be a great way for me to finish off the season, and would mean I can go into the winter on a high.

“Of course, I’m also there to try and help Tom as much as possible when it comes to the championship. I’m not in contention for a title myself, and as a team, we’ll all be working to try and help him achieve his goal.”

Tom Ingram, #80 said:
“I’m really pumped up for the weekend ahead, and I’m not feeling nervous or anxious about what is to come. We have put together a really good season, and it’s now a case of trying to put the final piece of the puzzle in place.

“This is the best position I’ve been in going into the season finale, and therefore the best chance I’ve ever had, and it’s vital that we do the best job possible when we hit the track and don’t drop the ball at all. That is going to be key to who comes out on top in the title race and it won’t necessarily be the quickest driver that wins – it will be the one that stays out of trouble and doesn’t make mistakes.

“Although Colin [Turkington] has the most hybrid out of the contenders, Ash and Jake are the two closest rivals in the points and I’m in the power seat when it comes to the three of us. As far as I’m concerned, the pressure in on the others.

“Even when we had weight on the car last year, we were strong around the GP circuit and the car now is better than it was then. In one respect, this is just another weekend with qualifying and three races, but there is a much bigger prize at the end of it. For me, it’ll be maximum attack.”

Jack Butel, #96 said:
“I have fond memories of Brands Hatch GP from my debut season and scoring my first points finish. I was gutted that I wasn’t able to take part in the race meeting last year as the full Grand Prix layout is one of the best there is, and I’m looking forward to getting back out on track.

“Heading back to the circuit this time around, I’m feeling in confident mood on the back of the last few rounds, where we’ve been much closer to the pace and have shown that we have the potential to challenge higher up the order.

“This has been a challenging year for me away from the track with my dad and girlfriend both being ill, and it would be great if we could bring the season to an end with some strong results on track. Having shown top ten pace at Silverstone, I’ll be pushing hard to try and bring home some points.”

Daniel Lloyd, #123 said:
“I’m really looking forward to the final round and I’m confident that we can end on a bit of a high. Brands Hatch GP is my favourite circuit on the calendar and one where I’ve always gone well, including last year where I got a podium finish.

“We ran well on the Indy layout earlier in the season and I feel we have a good set-up on the car that should allow us to challenge for some strong results. Qualifying well on Saturday will be important, but we shouldn’t have any of the traffic issues we had at Silverstone and I’d like to think we can right in the mix towards the front.

“Whilst I want to try and get the best results I can on a personal level, it’s also a big weekend for the team and I’ll be doing as much as possible to help support Tom when it comes to the championship fight.”

Justina Williams, Team Owner, said:
“This has been a hard fought season on track and a huge amount of effort has gone in throughout the year to get to a position where we are now in contention going into the final round.

“We’ve left no stone unturned since Silverstone to ensure that we are in the best shape possible for Brands Hatch and the whole team makes the trip to Brands Hatch more determined that ever to try and deliver the results on track.

“All four drivers are going into the season finale in a strong position and we will be giving our all to come away with the results we crave.”