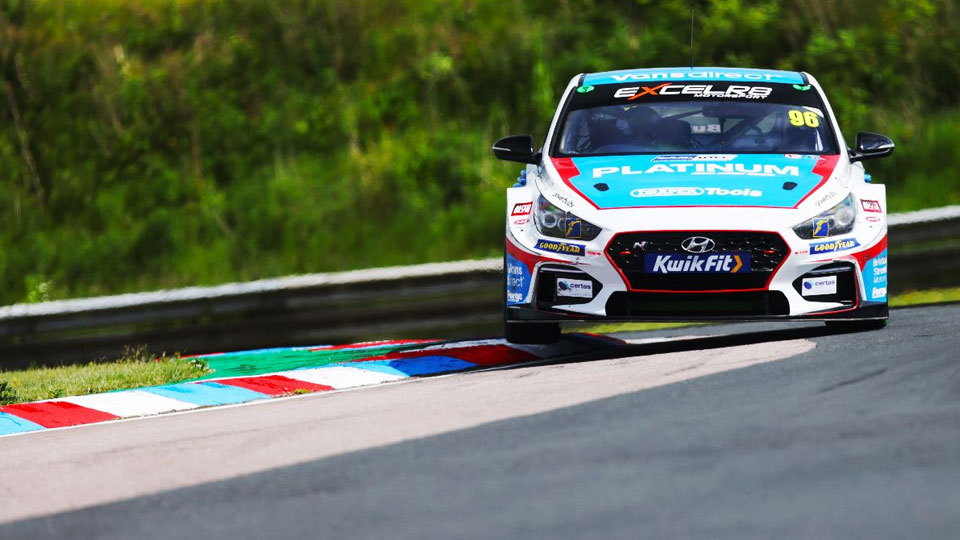 Bristol Street Motors with EXCELR8 TradePriceCars.com will look to strengthen its bid for top honours in the Kwik Fit British Touring Car Championship when the series returns to Thruxton this weekend for the eighth round of the campaign.

The Suffolk-based team secured a hat-trick of podium finishes last time out at Snetterton, and now makes a second visit of the year to the fastest circuit on the calendar with eyes firmly focused on adding to an ever growing collection of silverware.

Three third places in Norfolk moved Tom Ingram to nine podium finishes for the campaign, equalling his tally from the 2021 season and allowing him to keep in touch with former champion Colin Turkington at the head of the championship standings.

Ingram is currently 15 points behind the Northern Irishman and will bid to close the gap to his rival at a circuit where he has gone well in the past, with a double win in 2020 and then a podium finish last year on what was his first outing in the Hyundai i30 Fastback N.

The first visit to Thruxton earlier in the season saw Ingram’s hopes of victory ended when he was forced off across the grass in the opening race and finished well down the order, although he recovered to secure a brace of top ten finishes in races two and three.

That showed the pace in the Hyundai and with further improvements made to the car since then, the 29-year-old will hope to push for a fourth victory of the campaign.

Experienced racer Tom Chilton endured a trying weekend at Snetterton, where he was robbed of the chance to build on an encouraging performance through free practice and qualifying by an engine failure in race one that would ultimately end his weekend early.

Buoyed by the pace displayed during the Saturday running – where he was well inside the top ten – Chilton heads into the Thruxton meeting optimistic about challenging for his best results of the season, with the 37-year-old having scored a best result of ninth so far.

Now feeling more comfortable than ever at the wheel of the Hyundai, Chilton will look to add to the three podium finishes he has secured at Thruxton in the past and make up ground in the championship standings.

Although unable to break into the top ten at Snetterton, three points finishes for Daniel Lloyd allowed him to maintain his place inside the top eight in the championship standings and he now returns to Thruxton looking to try and add to the silverware he secured with a stunning double win at Croft prior to the summer break.

Lloyd secured three top ten finishes on the first visit to Thruxton earlier in the season despite admitting at the time that he was still trying to find the sweet spot with the Hyundai.

With the benefit of more time at the wheel of the i30 Fastback N, and with the knowledge gained on the previous trip to the circuit under his belt, Lloyd will seek to hit the ground running and remains confident of maintaining the strong form he has displayed thus far in 2022.

Jersey racer Jack Butel meanwhile will continue his quest for points at the closest thing he has to a home circuit, having again seen his pace go unrewarded at Snetterton last time out.

Butel looked on course to push for points in the opening race of the weekend before being run wide off track, but recovered in race two to grab his fifth top 20 result of the campaign so far.

The opening Thruxton meeting ended with mixed emotions for the 26-year-old, who displayed strong race pace but would be forced to contend with engine gremlins that forced him to miss the second race of the weekend.

Confidence remains high however and Butel will hope for the upturn in fortune he needs to belatedly open his points account for the campaign.

Tom Chilton, #3, said:
“Although Snetterton was such a disappointing weekend in terms of race day, I came away from it feeling really positive because the pace we had shown throughout practice and qualifying was so strong. We were consistently inside the top ten, and it was arguably the most competitive I’ve been in the car so far this season.

“It showed how the work we’ve done to get the Hyundai more suited to my driving style is now paying off, and gives us a platform to build on over the final three rounds.

“Thruxton is one of my favourite circuits on the calendar, and I’m optimistic that we can go there this weekend and battle inside the top ten. I genuinely feel this is my best opportunity yet to fight for some silverware, and if the chance comes along, I’m planning to grab it with both hands!”

Tom Ingram, #80, said:
“The results were alright on our first visit to Thruxton, but the incident in race one meant we weren’t able to really show what we had to offer, which was a bit of a shame at a circuit where we’d gone well previously.

“Since then, we’ve made big improvements to the car, and we know we’re at that stage of the season where we need to be on the attack and try to be ‘pointsy’ again – as we were at Snetterton in really maximising what we could from the three races.

“After a few rounds where the BMW has been particularly strong, I hope that Thuxton will play to our strengths a bit more – but you can’t rule anyone out in this game as there are plenty of quick drivers out there.

“We’ve got to keep our heads down and focus on doing the best job possible, but I feel we’re in good shape and can hopefully look forward to a really strong weekend.”

Jack Butel, #96, said:
“When we visited Thruxton earlier in the year, the pace we showed was really promising, but our races were hampered by issues outside our control. That’s been the story of my year as if it wasn’t for bad luck, I don’t think I’d have had any!

“Hopefully this will be the weekend where things finally go my way, because the results on paper don’t reflect how I feel I’ve performed on track, or show the progress we’ve made compared to where we were at the start of the season with limited testing.

“We’ve always shown stronger pace in the races than in qualifying, but in recent rounds, our Saturday performance has been much better and I’ll be aiming to try and get into the top on the grid for a third straight meeting to then fight for those points finishes that’ve been chasing.”

Daniel Lloyd, #123, said:
“I’ve had a few challenging rounds where things haven’t really gone my way, and I feel that we’re due a strong weekend again when we get to Thruxton. I’m going there in confident mood because we left the circuit with a good set-up on the car when we visited earlier in the year, and means we will start this time around in a better position.

“The podium positions have to be the target this weekend and I need to try and score some good points to try and close the gap to the drivers in front in the championship standings.

“We know that in recent meetings, the BMWs have been particularly strong but I feel Thruxton will be a good weekend for us with the Hyundai and hopefully that will be reflected in the results.”

Justina Williams, Team Owner, said:
“We’re getting to the business end of the season now, and every race – and every point – is now more important than ever when it comes to the championship battle. To be well placed in the standings at this stage is exactly where we wanted to be, but we can’t afford to ease off and have to keep pushing hard to take the fight to what is very strong opposition.

“With Thruxton being a circuit that should play to our strengths, we are confident about what we can achieve this weekend and a big haul of points – and hopefully some trophies – has got to be the goal.”