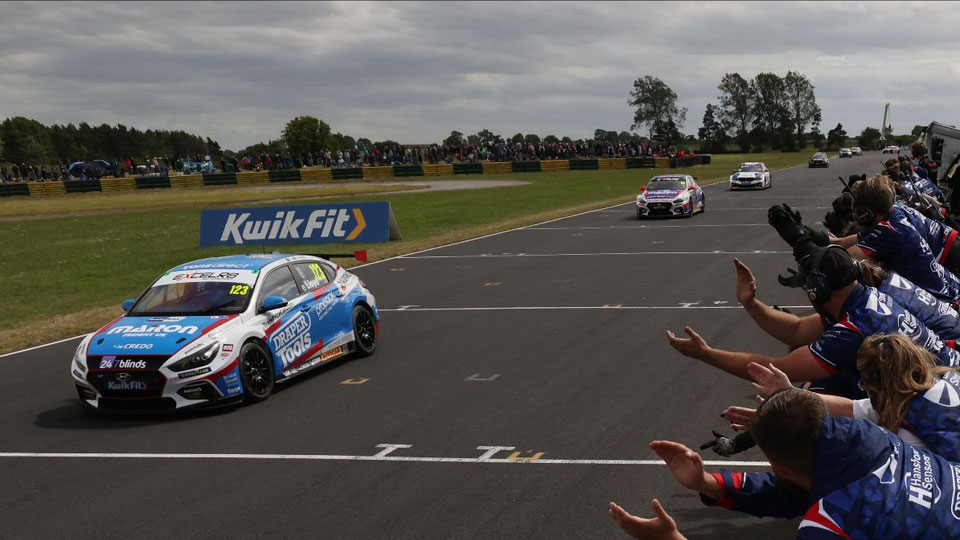 Bristol Street Motors with EXCELR8 TradePriceCars.com continued its rich vein of form in the Kwik Fit British Touring Car Championship with a double victory – and a first ever one-two finish – as the 2022 season hit the half-way stage at Croft.

The Suffolk-based team headed into the fifth meeting of the year hoping to replicate the front-running pace it had displayed in the previous meeting at Oulton Park, where Tom Ingram had grabbed a pair of race wins to maintain his title challenge.

However, the Oulton Park meeting had also seen the car of Daniel Lloyd heavily damaged in an accident, with the team working round the clock to rebuild his Hyundai i30 Fastback N to ensure all four cars could make the trip to North Yorkshire.

The weekend started in positive fashion with Ingram topping the times in the opening practice session, whilst he was then joined in the top six by Lloyd following the second session as the team worked to refine the cars ahead of qualifying.

After a number of revisions to his car ahead of the weekend, Tom Chilton was showing solid pace to sit just outside the top ten, with James Gornall – drafted in for the weekend in place of the absent Jack Butel – finding plenty of time across the two sessions as he got comfortable in the car.

As had been the case at Oulton Park, the Hyundais were on fine form when qualifying came around, with Lloyd and Ingram at one stage looking well set to lock-out the front row.

Improvements elsewhere would leave the pair in third and fourth on the times, with Chilton producing his best qualifying result of the season to go eighth and Gornall lining up in 15th having gone more than half a second quicker than in practice.

A storming start when the lights went out saw Lloyd grab second on the run to turn one and a fine move half-way through the opening lap saw him fight his way ahead of Colin Turkington into the lead.

From there, and despite two safety car periods backing up the field, Lloyd produced a defensive masterclass to keep Turkington at bay and secure a fairytale second career win in what was EXCELR8’s 100th race in the series.

On his 250th BTCC start, Ingram was part of the train of cars dicing for position behind Lloyd throughout and set the fastest lap en-route to fourth place, with Chilton taking tenth having lost out to two fast-starting rear-wheel drive cars on the run to turn one.

Gornall meanwhile slipped a place on the opening lap but worked his way back through to 14th place at the finish meaning that all four Hyundais finished inside the points in the same race for the first time.

From pole position after his race one win, Lloyd would produce another fine drive from the front of the grid to make it two wins from two, with Ingram battling his way up into second place on the opening lap and following him to give the team a first one-two finish – setting the fastest lap again in the process.

After his tenth place finish in race one, Chilton was able to go one better as he took his best result of the campaign in ninth spot, although there was disappointment for Gornall when he was forced to retire in the early stages with broken suspension.

With the top twelve on the grid reversed for race three, Chilton led the team’s challenge from fourth spot but he would lose ground when run wide in the early stages and ultimately had to settle for a second successive ninth place finish.

That left him two places behind Ingram, who stayed out of trouble to work his way through to seventh place to ensure he now sits back on top of the championship standings, with Lloyd capping the best weekend of his BTCC career with eleventh.

With his car repaired following the race two retirement, Gornall produced an impressive run from the back row of the grid to make up ten places despite early contact – crossing the line in 17th place little more than a second away from a second points finish.

Bristol Street Motors with EXCELR8 TradePriceCars.com sits on top of the Teams’ Championship, with EXCELR8 Motorsport / Hyundai second in the Manufacturers’/Constructors’ title race with the BTCC season resuming at Knockhill on the final weekend of July.

Tom Chilton, #3, said:
“This has been my best weekend of the season so it shows that the changes we made to the car coming to Croft were the right ones and that we’ve taken it in the right direction. Three top ten finishes is what I’ve been aiming for so far, and I feel it was just unfortunate in race three that we got pushed around a bit as we could have been on the podium.

“It’s been a fantastic weekend for the whole team – especially Dan with his double win – and on my side of the garage, there are an awful lot of positives to take into the summer break. I now have a car underneath me that is doing what I want it to do and I feel a lot more comfortable to really push.

“It was a lot more enjoyable to drive and I feel that the tyre test we have during the break is going to be important now for us to take what have learned here and develop the car further. There are still improvements to come, but with the car I have now, I’m genuinely excited about the remainder of the year.”

James Gornall, #18, said:
“I’m really pleased with the weekend when you consider that I’ve come into with no seat time in the car and at a circuit where I haven’t raced in really quick machinery for so long.

“At one point in qualifying, I was up in the top ten but 15th on the grid was a good place to start and it was nice to bring home some points in race one. I lost a spot early on but managed to fight back ahead of Adam Morgan, and then I was able to keep the guy who was leading the championship behind which was a decent enough result.

“What happened in race two was a shame and then early on in race three I got a hit that affected the rear geometry of the car which hampered me a little bit. Despite that, I made up ten spots and had loads of fun overtaking people, and we got close to scoring some more points. Had it not been for race two, we’d have definitely had more on the board.

“I think I’ve shown this weekend that I can do a good job with the right package underneath me, and I’d like to thank the team for welcoming me onboard, and also Jack for trusting me to look after the car in his absence.”

Tom Ingram, #80, said:
“After such a strong weekend at Oulton Park, it’s great to have come to Croft and put more good points on the board. This was a weekend where it was all about making sure that we stayed out of trouble and did what we needed to do, as we know that wins are nice, but it’s the points that really matter.

“Once again, the car felt absolutely great all weekend, particularly in the slow to mid-speed stuff when I was able to get it rotated really nicely and the traction was phenomenal. Having a car like that gives you such a positive feeling, and we’ve got it in a really good place.

“Saying that, development never stops and we’ve already had a few chats about things we can look at for Knockhill when we head there after the summer break. It’s great that we’ll be going there out front as it’s where we want to be, and we’ll keep working hard to maintain the lead we now have.”

Daniel Lloyd, #123, said:
“When I consider where I was two weeks ago leaving Oulton Park, I would never have imagined that I’d get to Croft and come away with a win to my name – never mind two. It’s been the most amazing weekend and I have to thank the whole team for getting the car fixed and out on track; hopefully this goes some way towards repaying them.

“From the moment we hit the track, I knew we could be on for a strong weekend and after qualifying, I had a plan in my head of what I needed to do in race one. I was so focused at the start and knew I had to get ahead of Colin in the first few laps if I wanted to try and get the win. It was a massive battle to keep him behind as the car wasn’t as its best through the final part of the lap, so to hold on and bring it home was fantastic.

“Winning again in race two was a really surreal feeling, particularly with Tom following me for a one-two, and then race three was just about scoring points and staying out of trouble. I have a busy summer break ahead working to find new partners after what happened at Oulton, and these results here will help me no end.”

Justina Williams, Team Owner, said:
“It’s been the most fantastic weekend for us as a team, and I’m hugely proud of the results that we have been able to achieve across the board. After the effort that has gone in over the last two weeks, to come away from Croft with another two victories and our first ever one-two finish is brilliant, and the perfect way to enter the summer break.

“For Dan to get his first wins for the team was a dream come true and he drove fantastically all weekend, as did Tom Ingram to regain his lead in the championship. I feel sure that Tom Chilton will now be able to show what he is really capable of after his best showing of the season, and James did a great job to score points when you consider he had never driven the car before this weekend.

“The season so far has been a great one for us but we can’t rest on our laurels, and we need to work hard during the five week break before Knockhill to make sure we come out fighting when we get to Scotland.”