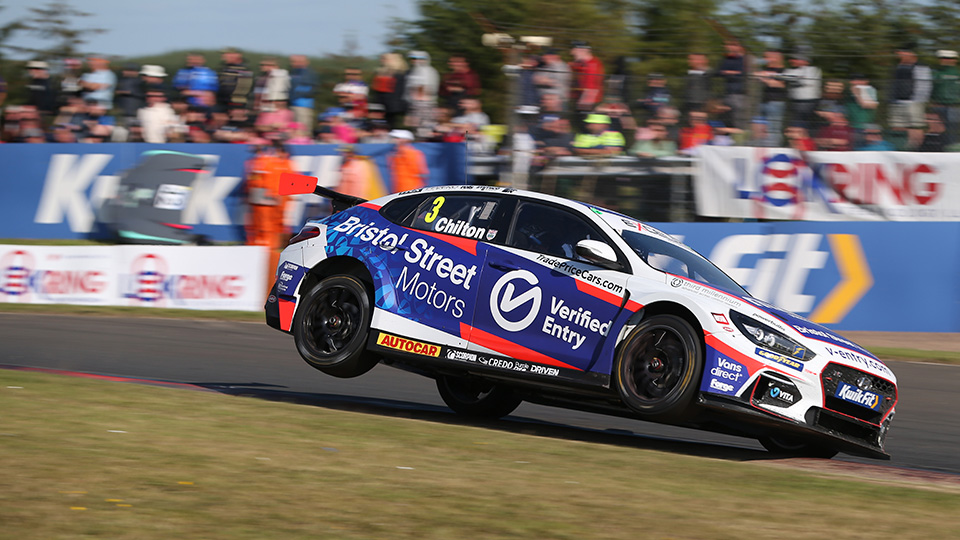 Bristol Street Motors with EXCELR8 TradePriceCars.com was able to hold on to its advantage as the leading team in the Kwik Fit British Touring Car Championship despite a challenging weekend on track at Knockhill.

The Suffolk-based team headed for Scotland hoping to fight for victory for the second season in a row, and whilst that wasn’t possible, the Hyundai squad was able to retain the lead in the Teams’ Championship as focus now turns to its home event at Snetterton in two weeks time.

After a tricky pair of practice session for all four drivers, qualifying would see Tom Ingram haul his car to eight on the grid despite having no additional hybrid power as championship leader, with Tom Chilton taking 16th place – albeit only a tenth of a second off the top ten.

Jack Butel – returning after missing the previous event at Croft for personal reasons – was able to set the 20th best time after an error on his quick lap prevented him from qualifying higher up the order whilst Daniel Lloyd endured a tricky session with a combination of set-up issues and hybrid trouble leaving him in 22nd.

Holding station at the start, Ingram fought his way ahead of Aiden Moffat and Rory Butcher in the early stages to sit in sixth spot and would hold the position to the finish having done well to keep pace with two rapid rear-wheel drive BMWs ahead.

Chilton joined him in the points after benefitting from a strong opening lap to make up three places before working his way up to eleventh by the chequered flag, although it would be a tricky opener for Lloyd as a diff issue left him in 19th.

Butel would also be left disappointed after he was forced off track by the Vauxhall of Ash Hand and forced to retire to the pits.

A strong start to race two saw Ingram get ahead of the BMWs of George Gamble and Stephen Jelley on the opening lap, and he fought hard to pressure Colin Turkington into an error in the early stages before being forced to settle for fourth spot.

Chilton’s forward progress continued as he improved into the top ten after overhauling the Toyota of Ricky Collard, although further diff issues for Lloyd – and mid-race contact – left him to finish in 22nd. From the back of the grid, Butel was unable to show the true pace of his car in traffic as he followed Lloyd across the line.

A clash on the opening lap of race three when he was forced wide onto the grass by the Honda of Gordon Shedden saw Ingram drop down the order and left Chilton to lead the team’s challenge as he picked up his second top ten finish of the weekend with a solid P9, setting his fastest race laps of the weekend in the process.

Ingram was able to recover from 20th at the end of the opening lap to take twelfth place and salvage more championship points with Lloyd going close in 18th spot having showed his strongest race pace of the weekend.

Butel meanwhile ended the weekend with a 22nd place finish having been left to rue the race one incident, which ultimately prevented him from challenging for a first points finish of the campaign.

Tom Chilton, #3, said:
“We’ve found a lot on my car and after the triple top ten at Croft, it’s been good to come here and add another two to my tally. I made a small mistake at the chicane in qualifying that cost me time and that would have put us up into the top ten on the grid and I think that would have made a real difference.

“Saying that, we came close to a top ten in race one with a solid run to eleventh and then we followed it up with two decent results; it’s just a shame we didn’t manage to catch the reverse grid as potentially we could have then challenged for a podium.

“We haven’t had the fastest car this weekend but we have been able to go out there and race people for position. My view has always been that if you have a car that you can race with, you have a good car and I can go home happy this weekend with how we’ve performed.”

Tom Ingram, #80, said:
“We’ve been able to pick up some solid results this weekend considering the competition we were up against with the BMWs, which seemed to have so much pace in the bank to give and take as they saw fit. I think our pace was similar to Ash Sutton over a race distance but he had the advantage of being further up the grid, and that was ultimately what was key.

“We were able to make up ground in both of the first two races which was really positive but we weren’t able to really maximise race three as I tried a move that had come off earlier in the day and Gordon closed the door and I ended up the grass. The positive thing is that we managed to come back through and grab some points, which could end up being very important when we get to the final rounds.

“We know that the opposition are going to be strong until the end of the season, and we have to work hard in the coming rounds to keep taking the fight to them. We have to learn and improve to come back stronger at Snetterton, which was a good circuit for us last year, and hopefully will be again this time around.”

Jack Butel, #96, said:
“The weekend started well with qualifying, where I was on for a new personal best before a small mistake on my part, although P20 still meant we were in a good position for the races and in the mix to fight for some points.

“Unfortunately, the good work we did on Saturday was undone in race one when I got forced off track and had to retire the car to the pits, because that left us right at the back of the grid at one of the hardest circuits to overtake.

“When the times are so close, it really ended our hopes of scoring points, and it’s a shame that the incident in race one stopped us from picking up the kind of results I know we are capable of.”

Daniel Lloyd, #123, said:
“After the high of Croft, this has been a really tough weekend and one we just need to put behind us. We were chasing the set-up on the car on Saturday and also had an issue with the hybrid that meant we were out of position on the grid, and it was always going to be difficult to come back from that on race day.

“Unfortunately we had some issues outside our control on race day that hampered our chances, which is a real shame as we know we have a package that is more than capable of running right at the front of the field. We had a positive run on track at Snetterton in the recent test, and I’m confident that we will return to form there in a few weeks time.”

Justina Williams, Team Owner, said:
“We saw this weekend that one make of car had the edge over the rest of the field, but I think we can go away from Knockhill happy with the pace we have shown and with the fact that we are still leading the Teams’ Championship.

“We were amongst the quickest front wheel drive cars, which allowed both Tom and Tom to pick up some solid top ten finishes, although both Dan and Jack have been unfortunate for different reasons and weren’t able to pick up the results we know they are capable of.

“We have a big weekend next at Snetterton, and hopefully we can head to our home circuit – and the place where we secured our first win – and be back fighting right at the sharp end.”