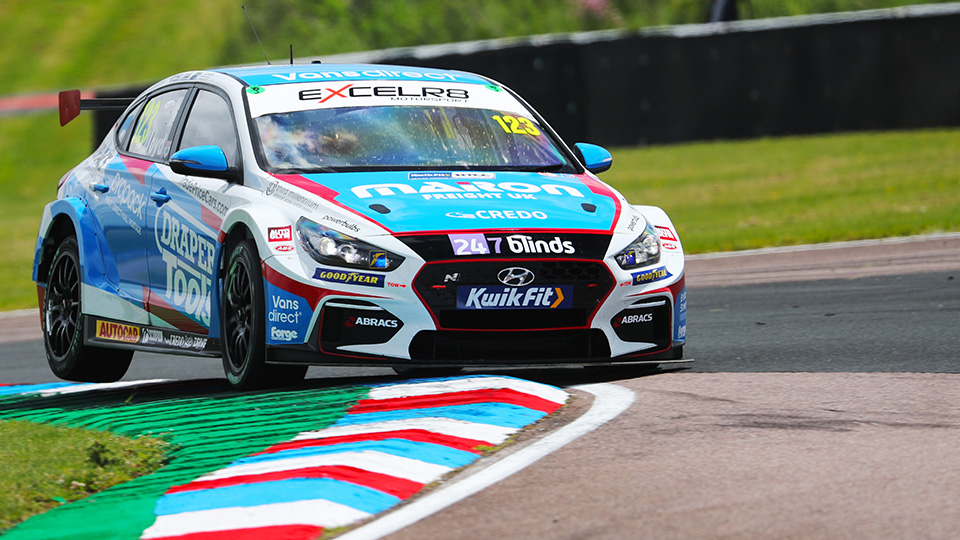 Bristol Street Motors with EXCELR8 TradePriceCars.com fought hard on track to secure five top ten finishes from what would prove to be a challenging weekend on track at Thruxton.

The Suffolk-based team went into the third round of the Kwik Fit British Touring Car Championship season looking to retain its place at the top of the championship standings, but an unfortunate set of circumstances on race day would prevent the Hyundai squad from fighting for silverware.

After two busy free practice sessions around the fastest circuit on the calendar, confidence was high going into qualifying for all four drivers, with points leader Tom Ingram heading the challenge as he secured eighth on the grid.

Dan Lloyd would go 13th quickest in the session having missed out on the top ten by just two-tenths of as second, with Tom Chilton lining up in 18th place for the opening race and Jack Butel lining up in 27th.

A fine start from Ingram saw him rapidly making up places at the start of the opening race to find himself in the battle for a place on the podium, before he was forced to take to the grass in avoidance after two other cars clashed ahead mid-way through lap one.

That resulted in an unscheduled trip to the pits to have grass removed from the radiator, and left him to finish back in 21st place.

Lloyd was one of the drivers to benefit from the drama ahead on the opening lap as he rocketed up into eighth, with the Yorkshireman able to show solid race pace to maintain his place through to the finish.

Twelfth place for Chilton allowed him to put points on the board after he too benefitted from a strong opening lap to make up places, although there was disappointment for Butel when an early race charge up towards the fringes of the top 20 was ended by an engine problem that led to him retiring.

Race two would see the team secure a solid double top ten finish, headed by Ingram after he showed the pace in the Hyundai to charge through the order, with a number of impressive overtakes allowing him to work his way up to eighth place.

Lloyd would follow him home in ninth having been a factor in the top ten throughout the race whilst Chilton crossed the line in 16th spot before a penalty for a rival for running off-track making a move for position saw him promoted up into 15th. Butel however would be unable to take the start as the team continued work to replace the engine in his car.

Ingram and Lloyd would unfortunately just miss out on the reverse grid for race three, but the pair were able to once again secure a double top ten finish as they took the flag in sixth and seventh place.

Battling his way forwards from his starting position, Chilton came close to the top ten places after a long battle with the Toyota of Rory Butcher ended with another eleventh place finish, whilst Butel – who was able to join the race at the last minute as work was completed on his car – was once again making up ground towards the top 20 when a moment at Noble saw him run over the grass. Forced to pit, he would drop off the lead lap and was classified in 23rd place.

At the end of the weekend, Bristol Street Motors with EXCELR8 TradePriceCars.com continues to lead the Teams’ Championship standings, with EXCELR8 Motorsport / Hyundai now third in the Manufacturers’/Constructors’ standings.

Tom Chilton, #3, said:
“I’ve scored points in all three races this weekend which is good, but they were all outside the top ten which isn’t what I was hoping for and not what I would expect at Thruxton. In all three races, I got a fantastic start but I was struggling on the end of the long straight and people kept getting ahead of me into the chicane which was frustrating.

“The pace hasn’t quite been there and it isn’t for a lack of effort on my part as I was really pushing hard and driving my socks off. There are a few of us who should have been in the top ten this weekend and weren’t, but that just shows how tough the BTCC is – and that’s why we all love racing in this championship.”

Tom Ingram, #80, said:
“The incident in the first race was a real game changer and without that, I think the weekend would have been totally different. Despite us only getting alright points as a result, we have worked hard to improve the car all day and it has felt good.

“It was a real shame that such a great start in race one went unrewarded as we were up fighting for third when the incident happened, but it’s just one of the unfortunate things that can happen around Thruxton. We came back well to score some points, and that is all you can do in that situation.

“In a weird way, we might benefit from the fact we’ll now have more hybrid when we go to Oulton Park, so it could be a blessing in disguise.”

Jack Butel, #96, said:
“Coming into the weekend, I was hopeful that this would be the meeting where my season really kicked into gear after a difficult start but it turned out to be massively frustrating. We were on the back foot a bit after qualifying but I knew we would have a strong race car, which we showed in the early laps of race one.

“To then have the engine issue was really unfortunate as I’m sure we would have got up into the points this weekend with the speed we had in the car. Missing race two and having to watch on was tough, and then in race three there was a trip across the grass that meant I had to pit and dropped a lap.

“Hopefully I’ve got my bad luck out of the way now, and things will improve when we head to Oulton Park.”

Daniel Lloyd, #123, said:
“It’s been another tough weekend as I try to find the sweet spot with the car, but at the same time, it’s been very positive as we’ve been able to score three solid points finishes and move up in the championship standings.

“We were on the back foot a bit after qualifying where things didn’t go our way, but I just got my head down on race day and a strong start in race one really set us up for the rest of the day.

“I know we are getting the car closer to where I need it to be, and I feel that we will go to Oulton Park next with a good base set-up on the car that will allow us to put into practice the things we have learned here.”

Justina Williams, Team Owner, said:
“Although we haven’t been able to hit the heights of the first two rounds this weekend, there are still plenty of positives to take away from Thruxton – not least the fact that we have retained our lead in the Teams’ Championship.

“Without the incident at the start of race one, I’m sure we would have been in the mix for podium finishes this weekend, but we’ve showed strong pace and all four drivers have battled hard on track.

“Jack’s issue was unfortunate but it shows the strength of the team to get his car back out on track, and we’ll look to fight back to top form at Oulton Park.”