Back to where it all began for EXCELR8 in BTCC finale 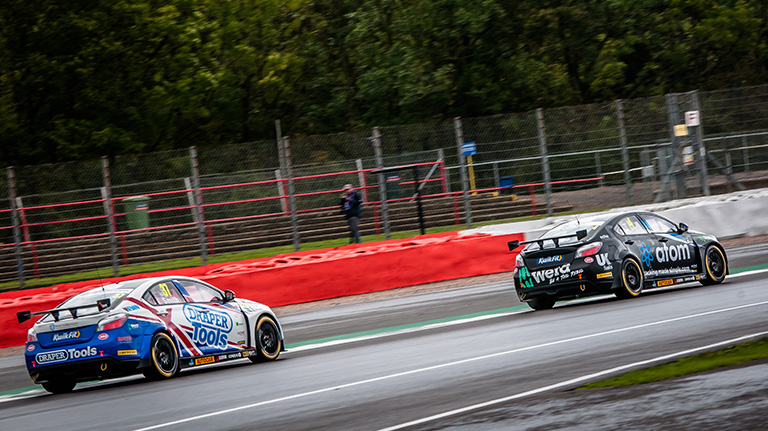 Back to where it all began for EXCELR8 in BTCC finale

It seems like only a few weeks ago that EXCELR8 Motorsport first unloaded its twin MG6 GTs at Brands Hatch ahead of its British Touring Car Championship debut in April. Now, this weekend marks the end of its maiden campaign at the same venue where it began as the team heads back to the Kent circuit, this time to take on the historic Grand Prix layout.

Based on current form, the season finale holds much promise for the team and both its drivers – Rob Smith and Sam Osborne. After a tough start to its first year in touring car competition, EXCELR8 has made huge inroads into the gap to the frontrunners, and has become a genuine challenger for the points since the start of the second half of the season. Osborne first put the squad on the score sheet at Snetterton, and then Smith equalled that feat last time out at Silverstone.

Much work has gone into refining the setups of the MGs, to not only aid traction, stability and speed, but also to further driver comfort and confidence, and the three races around Brands’ GP loop represent one final chance for the squad to show quite how far it’s come since that murky first weekend in April.

The longer, 2.4-mile Brands Hatch Grand Prix Circuit is a real test for drivers, especially in a touring car. Featuring big elevation changes, blind corners and flat-out turns through the Kentish woods, Brands’ longer layout is a track that has to be attacked in order to find those vital final tenths of a second. And both the drivers and the EXCELR8 crew have high hopes for one final flourish before the end of the campaign.

Rob Smith says: “I can’t believe it’s already the end of our first BTCC season, it’s just gone so fast. But I’m definitely going into Brands Hatch on a high. Silverstone was threatening to be quite a frustrating weekend until we hit form in that final race and brought some points home, and for me they were really the icing on the cake for all the hard work we’ve done across this year. I think the Brands GP Circuit should suit us though, as it’s less car dependent. Due to its nature the driver makes the difference, as you have to be prepared to throw the car into turns and trust that it’ll stick. I think the setup work we’ve done with the MGs recently will benefit us there. I’ve been on the podium at this track in each of the last five years [in the MINI CHALLENGE], so fingers crossed it can be another strong weekend and bring some more points.”

Sam Osborne says: “It seems like only two minutes ago that I climbed out of the car at Silverstone, but race seasons have a funny habit of disappearing really quickly, and this one’s gone like a flash! I’ve had a bit of time to go away and reset from Silverstone, which was a pretty difficult weekend for me, but I’m going into Brands with a fresh mind and fresh impetus. When the car’s been good this year we’ve been really quick, and the work we did at Silverstone should definitely help find that balance between outright speed and driveability that we’ve been looking for. I like the track and I’m really looking forward to going out and getting myself into the mix one last time this year.”

EXCELR8 Team Manager Oliver Shepherd adds: “As a team we’re all really excited for Brands, even if the season seems to have flown by. From a historical point of view, it will be really interesting to look at the data we have from the first round of the year and see the progress we’ve made through those sections and corners like Paddock Hill Bend and Druids, and then see what we can discover out in the woods on the GP loop. We’ve got a plan to work on the cars to make them as ‘safe’ and comfortable as we can for the drivers through the demanding, high-speed stuff and we’ll be pushing for some points to cap our season on a high.”

Qualifying for the Kwik Fit British Touring Car Championship final is scheduled for 1505hrs on Saturday, October 12. Sunday’s first race it set to get underway at 1135, with race two following at 1410, and the season finale topping the weekend off at 1700hrs. All races will benefit from live TV coverage on ITV4, while live timing will be available all weekend via TSL-Timing.com.