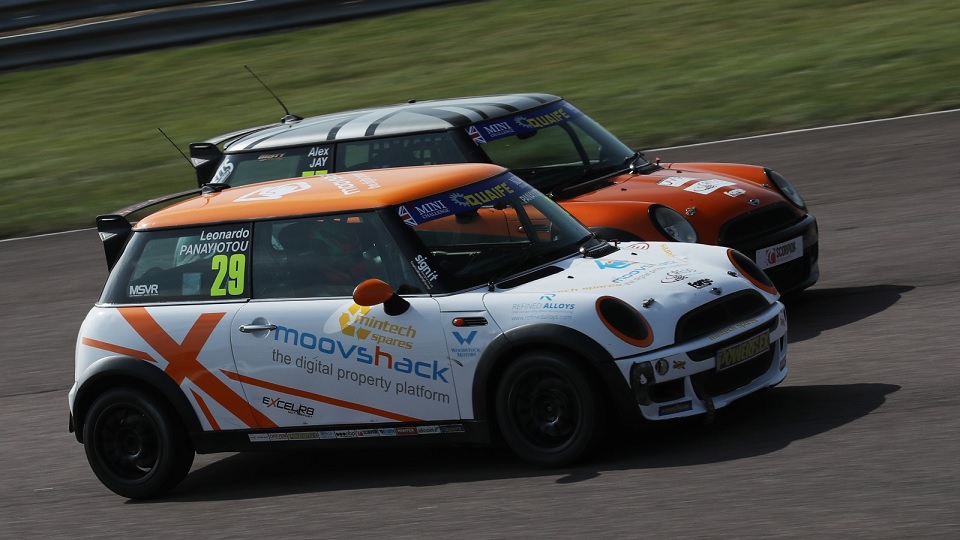 In a chaotic second race at Thruxton, Rookie cup driver Alex Jay crossed the line first, but after a penalty it was Leonardo Panayiotou who was handed the victory, after a Quaife MINI CHALLENGE Cooper Class race that featured a red flag. Jay in the Independent Misty Racing Cooper had started 13th and was only 8th for the second restart with five minutes left on the clock. However, he jumped the chicane on the final lap to overtake the EXCELR8 Motorsport driver and after an stewards decision was put back to second.

Polesitter Kasperczak was quick to consolidate his lead off the line as contentious battles behind enthralled the Television fans. Having jumped Josh Porter on the line, Lydia Walmsley was quickly on the back of Archie O’Brien and along with Kasperczak made up the breakaway three in the opening stages.

The tow proved vital for O’Brien who attacked into the chicane on the second lap, needing to skip Club to keep the momentum. It had proved effective though and O’Brien again used the tow on the next lap to take the lead, with Walmsley following him through.

Behind them, Directors cup leader Andrew Langley and Saturday podium finisher Josh Porter concluded their battle, before the EXCELR8 driver found his rhythm, catching the leading three. Porter had joined the scuffle by the sixth lap, briefly taking third, though the red flag would eliminate any more progress he was able to make.

Thanks to the excellent work of the UK marshals, the track was soon cleared of Clark Wells Cooper and the race was able to be restarted.

O’Brien would lead the field from Walmsley, but it would be Lydia who had the run through Allards taking the lead and demoting O’Brien. The closing laps saw a merry-go-round of leaders, culminating in a final lap battle between the charging Leonardo Panayiotou, Alex Jay, Kasperczak and O’Brien.

Jay, who’d restarted in eighth had been leading going onto the final lap, but a large tow from the battling Jay and Kasperczak allowed Panayiotou to cut back on the inside of Goodwoods to claim the lead heading the chicane. Jay would run wide at Club, cutting the corner and taking the position.

Panayiotou would take a well deserved win after the amendment, from Jay of the recovering O’Brien and Porter. Starting 22nd, Panayiotou had remained out of trouble throughout and gets his championship fight back on track after a dismal opening race. Rounding out the podium, O’Brien too takes a step forward compared to his rivals.

Porter had been one of the drivers caught up in the battle for the lead at the restart and had been pushed wide at Segrave. Recovering with O’Brien in the closing stages he beat Dominic Wheatley who finished fifth.

Kasperczak proved one of the biggest losers of the final lap, dropping to sixth ahead Alfie Guy Glenie and Langley who both ran side-by-side over the line. Despite dropping positions from his race one result, Langley still took victory in the Directors Cup. Walmsley, who had made contact with O’Brien at the complex on the penultimate lap finished ninth ahead of Alex Nevill.

Race winner Panayiotou said; “I felt like I was going to pass out, it was such a hard race. There were a lot of eventful moments in the race, but managed to make my way through cleanly without anything too major happening. You’ve got to keep moving forward, go for a gap when you see it and try not to do anything aggressive or silly.”

Speaking immediately after the race, Jay said; “It’s so nerve wracking to know if you’re even going back out a red flag and the last minute panic when you’re on the track, to try and scramble your way to first is ridiculous.”

Rounding out the podium, O’Brien said; “At the restart I was on pole and I knew straight away I’d be mugged at the restart, which of course ended up happening. I had to take to the grass, as four or five cars trying to go into the chicane wouldn’t work. But I’m happy with P3, considering I had fallen to sixth. So I’m happy to bring back that place for the AReeve Motorsport team.”