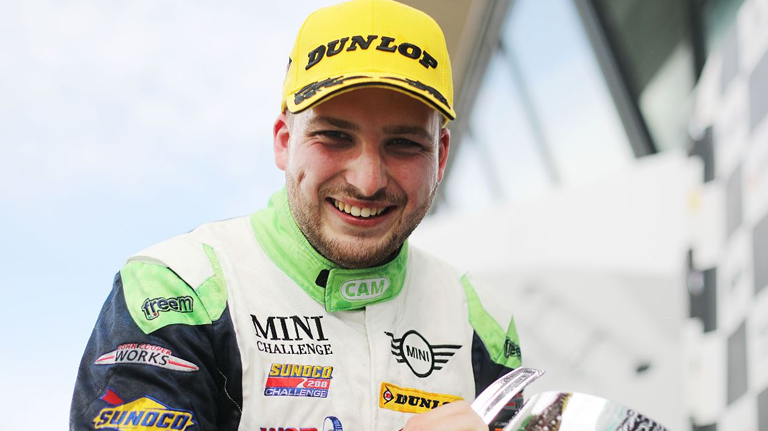 Having already secured one title in the MINI CHALLENGE – that of Rookie Cup Champion – at the end of a tremendously impressive maiden campaign last year, Dan Zelos has the main prize in his sights in 2020 as he returns to the fiercely-disputed single-make series with Excelr8 Motorsport.

Zelos was incontestably the standout newcomer in the MINI CHALLENGE’s headlining JCW class in 2019, as the talented young Norfolk ace cantered to the Rookie Cup laurels – but his eye-catching exploits did not stop there.

The 21-year-old East Anglian’s stunning single-lap pace, accomplished racecraft and incisive overtaking prowess yielded a brace of outstanding victories, nine podium finishes from 17 starts – more than a 50 per cent strike rate – three pole positions and four fastest laps. That was sufficient to earn Zelos third place in the final standings out of the 29 high-calibre contenders, as he consistently and fearlessly took the fight to a raft of more seasoned rivals.

Arguably the form driver over the second half of the campaign, the highly-rated Dereham-based hotshot is now aiming to maintain the burgeoning momentum with which he concluded 2019 as he chases the overall crown with Excelr8 – the same team that ran him under the MINI UK VIP banner last year.

What’s more, with the MINI CHALLENGE moving over to the immensely popular British Touring Car Championship (TOCA) support package, Zelos knows he has a golden opportunity to demonstrate his mettle in front of almost 20 million television viewers live on ITV4 and some 400,000 trackside spectators. The new season will begin at Donington Park in Leicestershire on 28/29 March.

“My aim for 2020 is very clear – to win the MINI CHALLENGE title, and in so doing prove to all the BTCC team managers that I’m ready to take the next step,” asserted the former Norwich University of Arts and Dereham Sixth Form College student. “It’s good to be returning to the TOCA paddock after a year away – there’s no question that it’s the biggest shop window around.

“Last season, I felt like I improved every time I got into the car, and over the second half, we were consistently pushing for the top step of the podium. The goal going into the new campaign has to be to keep the ball rolling and really start off on the front foot. I feel totally at one with the MINI now, but that’s not to say there’s not still time to be found – there are definitely small tweaks and set-up changes that we can make to extract even more speed.

“After all the success we enjoyed together last year and the relationships we forged, it was the natural choice to stay with Excelr8, and that continuity can only be a positive – particularly with so many other drivers playing musical chairs. With the combination of my experience and the team’s expertise, I’m confident we can produce a title-challenging package.

“We’ve got a solid pre-season testing programme planned, so hopefully we can put all the pieces of the jigsaw together to turn up at Donington Park in a couple of months and really hit the ground running. I don’t want to be playing catch-up again this year – I want to be the hunted rather than the hunter.

“I’m expecting a capacity grid given the interest shown in the series so far, and I’m under no illusions about the calibre of the competition. I fully anticipate a fierce fight ahead, and when you have a level playing field, the racing is always exceptionally close. All that said, there’s no question that I’m a much stronger driver now than when I last competed on the TOCA bill at the end of 2018 – and I can’t wait to show it!”

Excelr8 Motorsport Managing Partner Justina Williams has similarly high hopes for the forthcoming campaign, echoing Zelos’ assertion that a title tilt is very much on the cards.

“2019 was a very impressive first year for Dan in the MINI CHALLENGE’s JCW class, and to be one of the top contenders for the championship was testament to his great driving skills and racecraft,” she acknowledged. “He is extremely focussed on race weekends, gets his head down and just gets the job done.

“2020 is the year for us to win the championship with Dan, and for him to pull out his pole position times and numerous podiums as he did throughout 2019. He will certainly be one to look out for, and we can’t wait to be part of this exciting and thrilling battle.”

Dan is seeking further partners to join him on his exciting high-speed journey. If you are interested in getting involved in life in the fast lane, please contact: dan@danzelos.com